LUXOR: Quest for the Afterlife Review 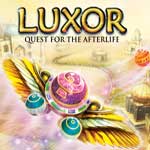 More of the same: That’s the immediate impression returning fans will get from Luxor: Quest for the Afterlife, latest in the popular Egyptian-themed action-puzzle series. In an unexpected twist, this installment mostly focuses on peripheral features, adding a cool narrated storyline, roving targets to pursue and collectible artifacts. Therefore, while still impressive in its own right, the game’s nowhere near as much of a leap forward as its immediate predecessor.

Don’t be discouraged, however. Kicking off with a bang in the form of catchy cutscenes complete with suave voice-overs and subtle, but engaging animations, the title instantly commands one’s attention.

Apparently, assassins have desecrated the tomb of Queen Nefertiti and Akhenaten, preventing their spirits from enjoying eternal repose. Charged with recovering the canopic jars these fiends have stolen, you must pursue the culprits across an attractively-rendered campaign map that spreads throughout half a dozen exotic lands including Persia, Syria and Egypt.

Happily, additional cinematic plot updates periodically punctuate the tale, adding incentive for forward progress. In addition, for the first time ever, to meet the game’s cast of characters, you’re given the option to take user-selectable branching paths through the adventure. Naturally, doing so requires that you complete multiple self-contained scenarios to progress down each road.

Actual play itself follows the same formula as in previous outings. Armed with a horizontally-movable “falcon winged shooter,” which lies at the bottom of the screen, you’ll left-click to fire orbs of varying hue at advancing chains of colored spheres. (Right-clicking lets you swap your current choice of ammo out for a differently-shaded alternative.) Place three of more similarly-adorned balls adjacently, and they disappear from play. Additional spheres then roll forward to fill created holes or objects of similar color instantly magnetically come together when they bookend such a gap.

Use careful aim, or resulting combos, to make a trio of matches, and collectible power-ups – area-clearing fireballs, time-slowing devices, crackling lightning bolds, clouds of vapor that paint multiple spheres a single shade – rain down from the sky. Finish a stage, and point-awarding jewels or ankh coins (tradable between stages at the shop for power-up-improving performance upgrades, new shooters and alternate ball sets) can also be retrieved. The ultimate goal being, of course, to prevent rolling balls from reaching the endpoint of tracks that weave under buildings, through holes and around other 3D objects that obscure your view or prevent shots from landing.

Sadly, while the action remains spry as ever, there’s little new to report in terms of additional play modes, an expanded arsenal or supporting bonuses. True: You can occasionally battle on-screen opponents to push treasure into your coffers and fresh extras do help in terms of sorting colors or letting you see where to best place shots.

And yes, as you advance, you do collect pieces of artifacts like the Eye of Horus, Cow of Hathor and Sphinx, which, when recovered, let you keep spot hidden goodies, prevent enemies from running away and unlock puzzle mode options. But really, periodic sequences where you assemble artifacts by arranging broken pieces in silhouettes or the need to track down jar-bearing baddies notwithstanding, such additions feel more like token filler than must-see game-boosting enhancements.

Along the same lines, great as featured aesthetic elements look, and slick as backing tunes (including subtle drumbeats that let you know when potential failure looms) prove, quite a few audiovisual assets are recycled throughout the tale. Playing through classic, onslaught and scarab swarm (wherein lots of small, sphere-chain-pushing scarabs flood your monitor) challenges, you’ll notice that many scenes, i.e. dockside views and starry nighttime skies appear several times.

More so than any previous entry in the series, the odyssey feels like an attempt to quickly churn out a new, half-baked sequel in time for the holidays. Given that its forerunner, Luxor 3, was released a mere 7 months back, these suspicions may not be far off the mark.

Regardless, let’s be honest: Describing this as one of the Luxor franchise’s less compelling outings is like labeling a specific volume of Encyclopedia Britannica not quite as comprehensive as its peers. In other words, even with the aforementioned knocks against it, Quest for the Afterlife can’t help but still tower over the competition. As such, collectors, completists and newcomers alike will find the game a welcome addition. More discerning players and longtime series vets should take note, however: Compared to earlier outings, this jewel of the Nile doesn’t shine quite so bright.