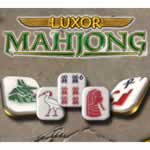 Mahjong games make for perfect time-wasters: they’re easy to learn, relaxing, and can be played for five minutes or five hours.

And so it’s no surprise casual game makers are seeking to create the ultimate time-matching experience; some add new twists such as 3-D graphics, power-up tiles and a countdown timer, while others fold in themes, such as the Caribbean, deep space or ancient Chinese history.

And so we now have MumboJumbo’s latest downloadable diversion – LUXOR Mahjong – and after clicking away at it for the better part of a week, it proves to be a highly polished and addictive adventure that should appeal to a wide audience.

In LUXOR Mahjong, your goal is to recover the stolen treasures of Egypt by matching tiles through 200 unique tile layouts, spread over three game modes. And this Egyptian theme is carried over nicely through the game, be it the board graphics (with earthy tones and lined with hieroglyphs), fitting music and tile designs with other Egyptian imagery including ankhs, ram heads, cats, scarab beetles and so on. Players can also choose from one of three unique tile designs.

In case you haven’t yet played a Mahjong solitaire game (sometimes referred to as Shanghai or Taipei), this ancient tile-matching pastime challenges players to correctly match and remove two identical tiles from a pile. In Luxor Mahjong, for example, you can match two tiles that each have five beetles on them or two identical fish or birds, and so on. Doing so removes them from the board. The goal is to clear the board until two special ankh keys are revealed and matched, which whisks you to the next level.

But there’s a catch to Mahjong games: only the tiles on the top and sides of the pile are available to the player, plus there is more than one possible match per tile design; choose the wrong one and the tiles underneath may become inaccessible.

Some tiles can be paired if they’re related instead of identical, such as matching two kinds of flowers or Egyptian characters in different poses.

LUXOR Mahjong also introduces five power-up tiles that can be used to help you clear the board. The Horus Transformation tile, for instance, which looks like a knife, lets you select two tiles and the second will miraculously be a mirror image of the first, so you can remove the pair. Another power-up, Set’s Storm (lightning bolt), lets you click a tile and all identical tiles on the board will also disappear. Vision of Isis (an eye) will show you the proper match on the board for each tile you click on for 30 seconds. You get the point.

After you complete each level you’ll be presented with a score and some ancient proverbs such as "The plant reveals what was in the seed" and "If you defy an enemy by doubting his courage, you double it."

The game offers three game types: the main Adventure mode where you journey across Egypt to find the stolen treasure; Single, where you can choose to play any of the previous boards unlocked in Adventure; and Traditional, with dozens of new board layouts that also stick to the Egyptian theme such as tiles in the shape of a cat, pyramids, ankhs and so on.

From the fun game-play to incredible production values, the folks behind LUXOR Mahjong have thought of everything – with the exception of giving gamers the ability to customize their experience such as importing your own tile patterns, board backgrounds or music. This isn’t that big of a deal as it could compromise the Egyptian theme, but it’s a welcomed addition found in other Mahjong games.

Also, it would’ve been a good idea to change the rules to the game between some of the modes (or throw in special power-ups or other unique features), instead of just offering new boards.

Overall, however, Mahjong fans (and Egyptian history buffs) will easily fall in love with this fun, relaxing and gorgeous game.

Birds on a Wire Review