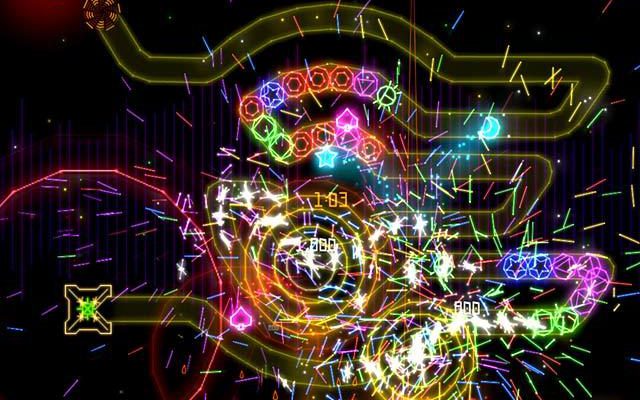 MumboJumbo’s Luxor has been evolving slowly but surely over the past several years, with new ideas and features piled on top of the original marble-popping concept. To call a game Luxor Evolved, then, suggests that this is the highest form of Luxor – the end result of multiple iterations, the coup de grace of the series.

There’s definitely some truth to that, as Luxor Evolved takes all the lessons learnt from past Luxor games and goes to town on the space genre, with vector-based explosions and neon lights all over the place. Whether you’re a Luxor fan or not, you’re going to want to check this one out.

The basic idea is still the very same as it was seven years ago. Colored balls snake slowly across the play area in various strings, and your task is to fire more colored balls towards them creating matches of three or more colors, and exploding the balls all over the shop.

If you aren’t quick enough, however, the balls will reach a pyramid at the end of the route, and your game will be over. The idea is to set up strings such that, when you destroy one color, the other colors around it will fall onto each other and create combos off the back of it.

The first major talking point of Luxor Evolved is those visuals, which are neon-bright all over the place, and very much resemble the graphics of the classic arena shooter Geometry Wars. In fact, it makes you wonder if the name was purposely chosen to match the Geometry Wars sequel Retro Evolved. 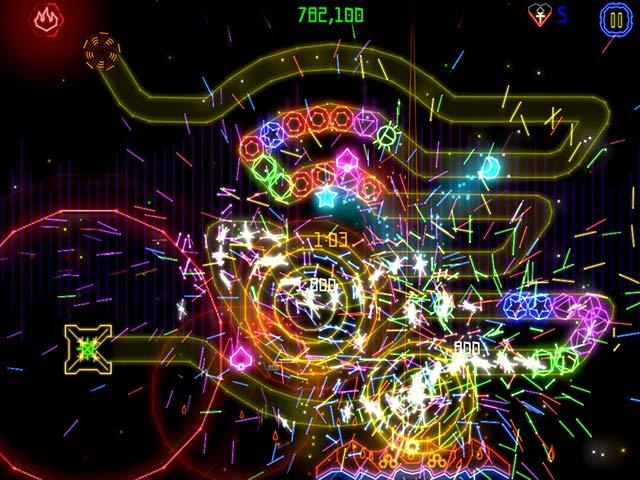 Mumbo Jumbo no doubt has taken a great deal of inspiration from the shooter series visuals-wise, and we really can’t fault them for it – it’s a perfect match, with your computer monitor frequently looking like the fourth of July. If there was one way to make Luxor that little bit more exciting, it was frenzied and exciting visuals – and it works a charm.

Luxor Evolved is also one of the deepest Luxor experiences designed, with combos, streaks, unlocks, upgrades and bonuses all over the place. As you advance through the game, you’ll be able to claim ridiculously strong powers that convert your ship into a huge fireball-breathing beast, and taking down entire screens full of marbles is a breath of fresh air.

There are also various spinoff levels here and there to keep the flow of the game fresh. Boss battles ask you to destroy strings of balls that are rotating around huge behemoths, while secret levels see you popping marbles on Pac-man levels and Marble Madness levels, amongst others. These crossovers always bring a smile to our faces. 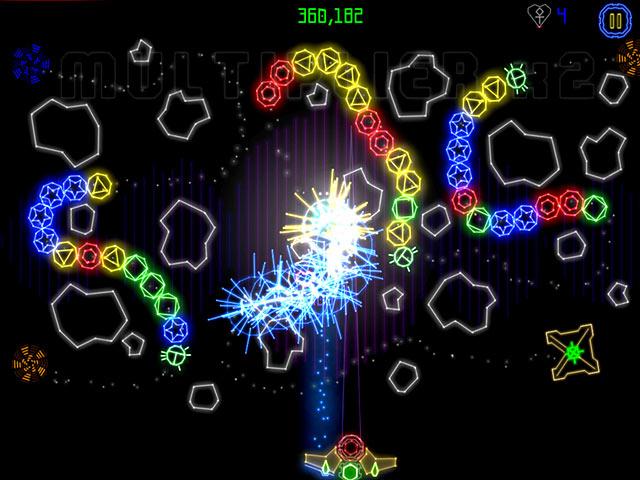 Even with Luxor Evolved‘s achievements and lengthy campaign, it has to be said that it’s still very much the same game you’ve played many times over. Strip away the visual style, and you may find it difficult to justify putting down money yet again. We would also have appreciated online leaderboards, as that definitely would have brought us back time and time again as we attempted to beat our friends’ scores.

As it is, Luxor Evolved is Luxor with a new, neon-sparkly face, and it’s as enjoyable as it ever was. If you’ve never played a Luxor game before, this is a great place to start.