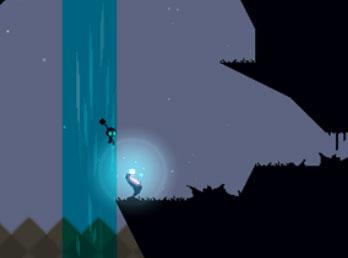 It was just over 40 years ago that the first human set foot on the moon. Yet while it was “one small step for man”, the little alien in Boss Baddie’s Lunnye Devitsy needs “one giant leap” to get back to where it belongs.

Roughly translating from Russian as “moon girls,” Lunnye Devitsy provides a gorgeously atmospheric world for the player to explore at their own pace, with only a few backtracking issues slightly tainting what is otherwise an enjoyable experience.

You play as a silhouetted creature that has fallen from the moon, and now wants to return by any means necessary. There are six ways for the alien to get back to its home in the night sky, and your challenge is to explore the land and find all the possible routes.

The world is reasonably sized, but it’s the general atmosphere that really sets Lunnye Devitsy apart from the pack. A combination of beautifully pixelated graphics and a soothing soundtrack create a fantastic setting which give what is ultimately your standard exploration platformer such a spectacular edge.

There are no enemies in this world and no way to die, allowing you to roam the land at your own pace. While the goal is to find the six different paths back to the moon, the game is really about abstract exploration, and you’ll find yourself diving into the vast mountainside and simply seeking out every corner it has to offer.

While exploring is great fun, there is a small issue in checking out the edges of the available world – there are several pathways that lead to a dead-end, which can be a little frustrating. Still, once you begin to learn the layout of the land a little better, these can be avoided. 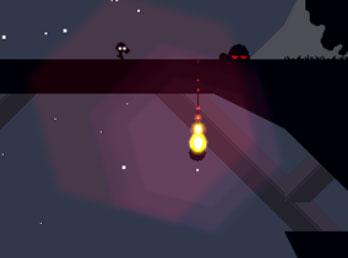 Several different areas make up the entire world, and the lighting and music change as you enter each one, flowing smoothly into one another and really giving a sense of the surrounding mood. Again, it all oozes atmosphere and really adds to the experience.

The six methods for reaching the moon range from simple to fairly taxing. There are a couple of item-collection missions that will provide passage, while others include solving puzzles, climbing structures and pushing buttons. While there’s a nice variation in puzzle type, some players may find it much too tricky to discover all six possible exits, as a couple are rather abstract in their execution.

Dotted throughout the world are a number of different power-ups for upgrading your alien, allowing it to reach areas it could not previously. Annoyingly, every time the game is restarted these power-ups will need to be collected all over again (although your progress in getting to the moon is saved as balls of light on the its surface).

Many of the routes to the moon use the same power-ups, hence you’ll need to grab them multiple times, causing a fair bit of backtracking. Solved puzzles will also automatically reset, meaning you may have to set up certain paths every time you play.

This is a minor nuisance in a wonderful adventure, however. Lunnye Devitsy provides a unique and gorgeous world that is definitely worth exploring. For those not yet convinced, there is a five-minute demo available for download.