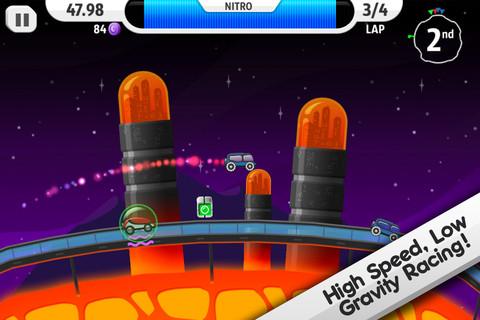 Racing to the Moon & Back on iOS with Lunar Racer

Oftentimes the best concepts in games are those that are simple. Noodlecake Studios showed players this with their first iOS title, Super Stickman Golf, and are now attempting to do so again with Lunar Racer. A stylized and futuristic racer in which players dart about an entire 2D planet, it’s easy enough to pick up on and makes for a fantastic idea, but often feels far too easy and imbalanced.

So in the future, races apparently don’t run laps around Daytona anymore, but entire moons. Making use of the more classic future-style of bubbly domes and such, players drive upon the 2D, low-gravity surface of variously stylized worlds in short races against three other opponents. With the bulk of driving already automatic, players need only control when to use nitrous boosts and keep their car right-side up when it inevitably leaves the ground.

The tracks are a slurry of dips and ramps that players will hit and send them careening into the upper atmosphere of whatever area they are racing on. Since the moons are fairly small, their curvature plays a big part in the race and such players may need to tilt the iDevice in order to keep from landing on their head and crashing (losing valuable time). That said, a handful of tricks, such as front and back flips, can be initiated to refill a gauge of nitro.

By tapping and holding the right side of the screen, users will initiate a significant fuel burn that will increase their speed dramatically (tapping the left side of the screen will activate a gravity assist that pulls the car back to the ground). Unlike other racing games though, nitro isn’t just a boost. Using it is a requisite to winning. As such, players perform the noted tricks to keep it full. The problem is that if it ends up drained, players are rarely able to get enough lift off of a ramp to perform significantly replenishing tricks.

The only saving grace is that there are scattered item boxes — akin to those in Mario Kart — that grant random weapons or defenses. These include everything from nitro refills to heat-seeking missiles. This is where part of the imbalancing comes, as the offensive items are nigh unavoidable. In many cases, missiles will track opponents from across the map, and since the tracks are extremely short, it is frequent that players will lose their first place ranking due to something they can usually do nothing about (there is a shield item, but getting it is based on luck). Additionally, another item is a mine that is placed on the track, and since the game is 2D, it too is virtually unavoidable.

Even with these balancing problems, the game is still very, very easy. Once players get the hang of the controls, every race that doesn’t end with a poorly timed missile is exceedingly simple to win. Most of the time, the tracks are so basic (there are some that have different paths that can be taken instead of the same old circle) that all one has to do is properly time their nitro boosts on ramps. This will refill it with the trick “Long Jump,” and thus nothing else needs to be done. Rarely does the player even have to tilt the iDevice to keep from crashing. A race can literally be won by pressing one button; even in the hard-mode difficulties. 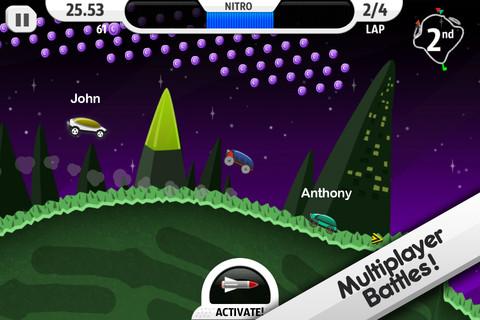 There is a bit of a challenge though in unlocking the trio of achievements that accompany each race track, such as performing X amount of double backflips and still getting first place. Doing these are great additions for completionists, and earning all of them sends users to a bonus level where they can collect “Moon Bux” (this currency is also in regular levels) that can be used to customize one’s car’s aesthetic.

Overall, Lunar Racer is a decent mobile game, but its simplicity stretches so much that it comes off as absurdly easy most of the time. The only time it does become difficult is when something cheesy happens like hitting an unavoidable mine. That’s not hard. That’s annoying. Still, the nature of the game is a fun idea and should Noodlecake add more interesting levels, the app will become far more than just “okay.”