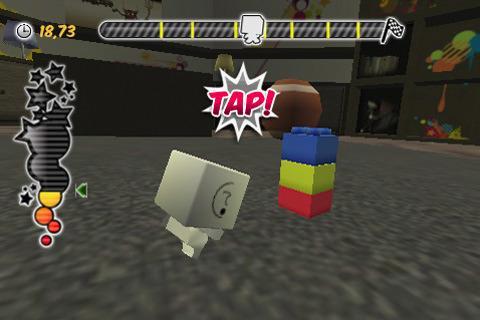 Lumaki is a strange app for the iPhone. It’s an amalgamation of two popular genres: pet-sim and minigame library. It’s got cute papercraft aliens, great production values, and encourages users to participate in an online community. While this all seems like a winning idea for an iPhone game, the game is never able to capture the fun it emulates, which is a shame because it feels like a very near miss.

The basic idea is that the Lumaki are a race of origami-like aliens composed of paper. Their homeworld is doomed, so they travel through a portal that takes them to Earth, where they engage in a series of minigames throughout the home they land in. This is all explained in minute-long intro that isn’t followed up at all as the game progresses.

While the story is basic, Lumaki’s visuals are anything but. It features 3D graphics straight out of an early PlayStation game, with cute characters and sizable environments. That said, you can’t really manipulate where your character goes or what the character sees. Instead, players are required to simply react to what the game pitches at them, meaning that everything presented is a predetermined viewpoint.

The biggest problem with Lumaki is that, despite its production values, it’s both shallow and frustrating. There are only three environments, with four levels per environment. Each of these levels is based on a certain type of play: obstacle course, two types of platforming, and a form of touch-screen boxing. Once you beat these minigames, there’s not really anything else to do other than earn cash by beating levels and buying new features/clothing for your Lumaki.

The gameplay, while simple, is far from easy. Platforming is accomplished via catapult-based leaping, while boxing and obstacle course running requires you to rapidly drag your finger back and forth across the screen and then tapping the screen when directed.

During the boxing levels, I was never once able to top out the power level when I swiped my finger back and forth across the team. Not only that, but tapping the screen when instructed on these levels doesn’t actually work. It takes three or four taps before a blow is actually delivered. Meanwhile during the obstacle course levels, you have to hit the screen at precisely the right time or your Lumaki will be knocked flat on its back (forcing you to restart the level). 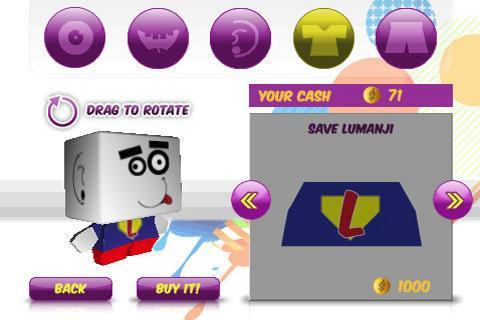 Part of the buzz surrounding this game is a papercrafting feature, which actually isn’t a part of the app itself. Instead, you create an account in the game and then log onto mylumaki.com from which you can customize, print, and assemble your own Lumaki creation. This sounds like a cute little tie-in, but it doesn’t work.

I created an account, logged into the website, and tried to create a custom Lumaki only to receive an error message that I couldn’t actually save my creation. According to the message, I had to save my Lukami via the game (which I did, repeatedly) in order to access it on the site. The system never seemed to work, and I finally stopped trying out of frustration.

Finally, Lumaki won’t run on an iPhone 3G. Every time I tried to start the game, a loading screen would appear and then the app crashed. Yet when I played it on my iPad, there was no problem whatsoever.

Lumaki tries to capture the fun of a pet simulation and a minigame compilation, but there isn’t enough diversity in the gameplay mechanics. It also feels like the difficulty level was set absurdly high in order to make playtime last longer. With some spit and polish -as well as some adjustable difficulty settings- this could be a fun app, but at the moment it’s average at best.