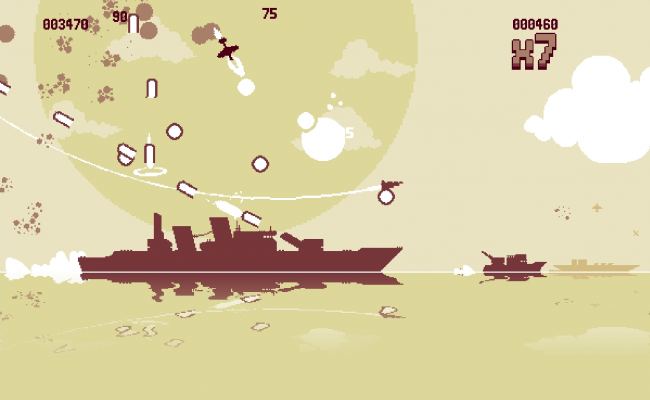 Press Up to Die

After several hours with the game, I can’t tell you what Luftrausers means. I don’t speak German, and the best Google Translate can tell me is that “luft” means “air” and “raus” means “out.” I can, however, tell you what it’s about.

Luftrausers, the latest game from Vlambeer (Ridiculous Fishing, Super Crate Box) is about pushing back against the inevitable. From the moment it introduces you with the message “PRESS UP TO RAUS” you’re fighting against gravity, trying to keep your unlikely World War I/II amalgam aircraft out of the water below. 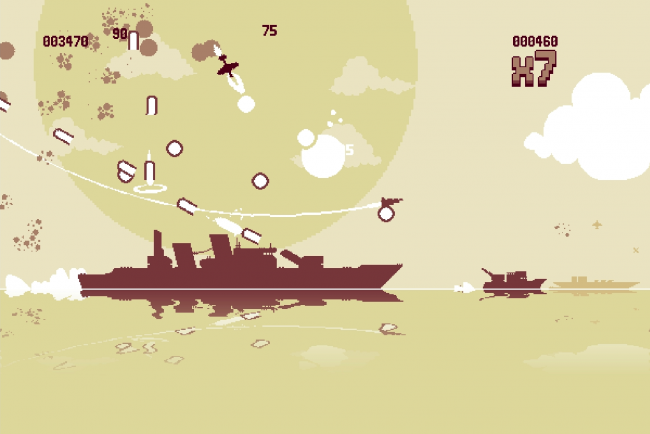 Seconds later you’re bombarded with all manner of biplane, fighter jet, dirigible and battleship. Suddenly it’s about surviving against the overwhelming tide of onscreen projectiles with controls I will generously describe as “loosey goosey.”

Rather than move with the aerial precision of an arcade shooter, you loop and swing drunkenly through the clouds (and the water, and the upper atmosphere, and the enemy vessels). Pressing up on the keyboard pushes your ship forward relative to its position, not the screen. Likewise, turning adjusts according to your plane’s direction, not your mind’s eye.

It’s a constant fight against gravity, momentum and your own preconceptions of how an arcade shooter should be controlled. You’re not meant to be “good” at Luftrausers. You are meant to die, again and again, smashing your head against its intentionally ludicrous gameplay.

There are steps to take in order to delay the inevitable. While not firing, your plane will regenerate health. It’s a classic risk/reward scenario in which letting your weapons cool heals you, but more opponents will fill the screen to blow you out of it.

You can tell when their attacks are taking a toll thanks to an enclosing circle of blinding white. The closer you are to death, the tighter the ring closes around you, obscuring your vision of the minimalist, sepia-tone skies. The action also slows to a crawl, letting you hope that your reaction time will improve enough to save yourself at the last second.

This is a false hope. Luftrausers is a mean game.

That only gets worse as your arsenal of aeronautical components grows. You think replacing your standard machine gun with a laser beam with make it easier to shoot down enemies. In reality, the slower turning speed it introduces makes you look like a drunk with a flashlight next to the nimble maneuvers of your foes. An engine that propels itself on bullets sounds ingenious, until you actually start jerking through the air with each projectile pulse. 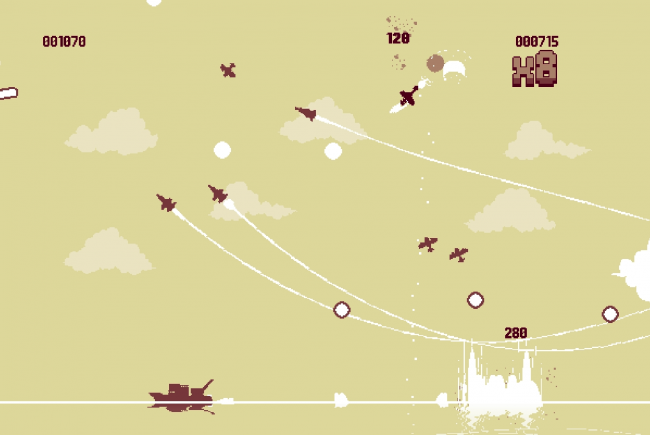 Each opportunity to embarrass yourself is the key to unlocking a new one. New plane parts come with a side-objective, ancillary to the obvious get-more-points-and-don’t-die campaign.

Shooting down enemies isn’t the only way to destroy them. At the cost of your own health you can bodily cut through planes, or duck beneath the waves, only to rise up and bore through ships (realism isn’t really a concern for Vlambeer). One of your three aircraft parts (gun, body, and engine) might require you to kill 10 enemies in such a way. Or maybe you need to destroy them without taking damage, or maybe while taking damage.

It’s different for each component, and mastering them in this way unlocks new ones. Mixing and matching alters the look of your craft, and each of the dozens of combinations has a unique name. “The Pig” features a spread shot, body armor and a fast boost, while “Jaws” carries a standard machine gun, a body that doesn’t take damage from collisions and an engine that can survive underwater.

Even with these constantly adjusting variables, Luftrausers is always fair. The physics of flight never change. All that alters is how your plane maneuvers through them. While they might be cartoonish and just plain idiotic, they’re tight, consistent and perfectly fair by their own standards. 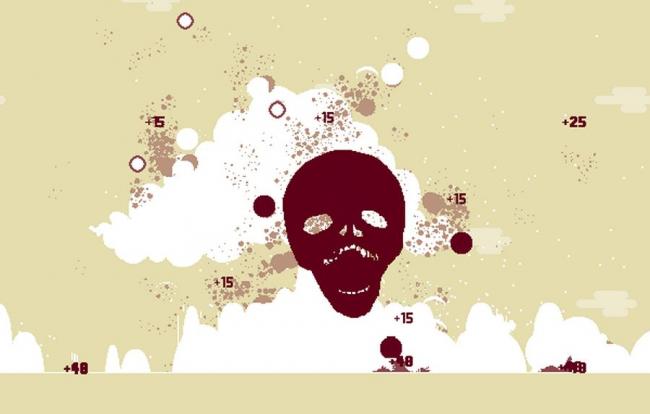 That’s Luftrausers’ meanest trick; you think because it’s consistent that you’re constantly getting better at it. You’re not. Probably. Wait, maybe you are! Oh. Nope. You’ve just died again.

Sure, death is inevitable. Sure, the weapons and parts only trick you into thinking they’ll make you better. That’s not going to keep you from trying over and over and over again. It’s incredible how much time you can lose to Luftrausers thinking you’re actually making progress. The tease of new, idiotic toys is just enough to ease the pain of dying, and the time it takes to restart makes the inevitable seem a trifle.

There’s not a lot to the game; once you’ve unlocked everything, you’d better have some friends whose high scores you want to chase. What’s there, however, is polished as near to perfection as almost any game I’ve ever played.