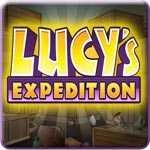 Interested in a time management game that doesn’t involve waitressing, fashion or anything stereotypically "pink?" Considering that most service games fall into this trap, it’s neat to see something different. Lucy’s Expedition lets you organize archaeological sites and dig up all kinds of ancient artifacts and relics in order to put together a mysterious map.

After finishing at University, Lucy decides to stay on as a professor, when the faculty head asks her to help solve a strange mystery. Six museums across the world have each discovered a piece of an ancient map. While they’d like to put them together, none of the museums actually want to give up their pieces of the ancient map. However, they are all willing to trade their map pieces in return for some newly discovered artifacts. Lucy is sent out on the job, and heads off to globe trot around the world and gain enough goodies in order to earn all of the map pieces.

If you’ve ever played Miss Management, you might see some similarities, since both involve micromanaging employees. You earn funds by recovering artifacts and taking care of your crew. If you see a shovel over a dig spot, it means you need to send over a digger by clicking and dragging  one to the correct spot. Two diggers can work together on one spot, making the work move faster. You’ll get a bonus if they are wearing the same color clothes.  Sometimes you’ll hit a rock, and then a picker is needed.

Both diggers and pickers need occasional refreshments. They’ll periodically stop working and request a special item, like water or an apple or a sandwich, and you’ll need to send your errand girl (Hannah) over with the food. It takes a few seconds for them to actually eat it, but eventually they’ll get back on task. Unfortunately, you can’t replace a worker that is eating or complaining, so you’ll want to attend to them quickly.

Some dig spots need to be assessed before you can start work there, so click on them to send Lucy over to investigate. When she’s done, the shovel will appear and the spot will be ready for digging.

After an artifact is uncovered, it’s also Lucy’s job to clean and analyze it. Clicking on it will send her over, but she’ll need the right tools for the job. It’s worth mentioning that Lucy is the only one who can work after quitting time, assuming you have tasks cued up for her.

If you’re wondering about forming a strategy, there’s plenty of opportunities to build one. Each dig spot has a meter below which tells you the type and amount of artifacts buried there. Bronze are the least pricey, and silver is moderate, while gold artifacts are the most valuable. You’ll want to come up with a plan for using your workers most efficiently to gain the most profit on your digs. Delivering two items at once also gives you a bonus. Lastly, you can earn a bonus if you dig up all artifacts on a site, but this is nearly impossible after the first few rounds.

To make things more hectic, Lucy’s nemesis Nigel Gneaugood likes to cause trouble on the dig sites by stealing food and artifacts, and hypnotizing your workers. If a worker is hypnotized, you’ll need to use a first aid kit to get him/her working again. Nigel can be chased off by clicking on him a few times. He’s a real pain, and kind of an annoying addition to the game.

At the end of each game day, you get to play the bonus round to earn more cash. This is basically just a memory-style matching card game. You’ll be shown a series of cards, which will then be flipped over, and you’ll have 5 tries to make as many matches as possible. It gets more difficult as you advance, since the number of cards increases.

After each round, you’ll also be given a choice of upgrades, like cooking lessons which speed up Chef Cookie, boots that speed up Lucy or Hannah, or better tools and shovels. It’s a nice touch, but none of the upgrades really have a huge impact, other then the speed boots.

In the game’s favor, aside from a cool theme and some interesting new game mechanics, Lucy’s Expedition is subtly addictive. It’s not the sort of game that strikes you immediately, but it certainly grows on you the more you play. There’s some replay value, since you can aim for an expert score on each level, and may replay any level to get one. The music and graphics are on par, and the length is pretty good, taking around 5 hours to complete.

On the downside, it’s not quite as polished as it could be, especially when it comes to Hannah and the tools and refreshments. The instructions are a bit vague, so newbies to the genre might be very confused. It took me two-thirds of the game to figure out that there is a recycling bin in the bottom center of the screen, so Hannah can discard unneeded items. This is never mentioned in the tutorial.

You can’t move your workers around once they are assigned, which would have been nice for more flexibility. Also, you must be very accurate with your mouse clicks, and sometimes must repeat clicks to register them.

Despite some technical issues, on the whole, Lucy’s Expedition is a nice change of pace from the usual time management fare. While it’s not perfect, the game mechanics are different than the norm, and it grows on you the more you play.