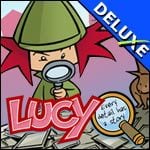 One of the hottest casual game genres to surface over the past few years is of the “hidden object” variety.

You know, those games, such as Mystery Case Files or Mirror Magic, where you must hunt for objects on the screen and click on them with the mouse?

The latest is Zylom’s Lucy Q Deluxe, starring a young female private eye who is hired by a man who suspects his wife is having an affair. By following the story, told through a colorful comic strip, you must visit specific locations and suspects along the way. The lighthearted tale is cute, and sets up the environments you’ll be sniffing around in.

In the main story mode, the game-play works as follows. The game is presented with a half-dozen or so close up pictures of a scene (called “details”), vertically lining the left-hand side of the screen. So, instead of words, as in Mystery Case Files, you’re shown a circled photo of what you need to find. The game starts as the full photo is revealed, and you must click on the circled “details” within the allotted time. If you click on the wrong part, you receive a big red “X” (read: not good). Do this a few times and it’s game over. If stuck, you can click on the Hint button; you’ll get an additional hint (if you want it) every 50,000 points earned.

An example of a scene would be a countryside mansion. “Details” you need to find may be the corner of the front door, one of the windows, a weather vane, chimney tip, garden gnome boot or two overlapping branches in a nearby tree. Also, one or more of the details you need to find offer a bonus if you can locate it before a small clock runs down.

Every so often in the 80 or so photos, players will receive a helpful item, such as a magnifying glass, or a deterrent, such as when the image is covered by little pieces of paper that only show what’s underneath it when your mouse is overtop it. Because time is of the essence, such obstacles can really affect your game!

Secondary game modes include one that has you racing against the clock to find details and another that sees how many details you can find in a row without making any mistakes.

Lucy Q Deluxe is a clever take on this genre, but it does take a while for things to heat up. That is, it’s the not toughest game. Within 30 minutes I was already on Chapter 6 of 11 in total in the story mode. Unless there’s downloadable photos to add to the replayability, someone who shells out money for this title might be disappointed. Also, the game-play really doesn’t advance in any way other than a less-forgiving clock and a few obstacles. One last issue is clicking on the correct area to find the detail yet, because I might have been off a quarter of an inch, I received a red strike instead of a green checkmark. This proved frustrating, though it didn’t happen too often.

But those who enjoy these “hidden object” games may enjoy the fun story, bonus game modes and photo-based puzzles that are perfect for right-brained gamers.