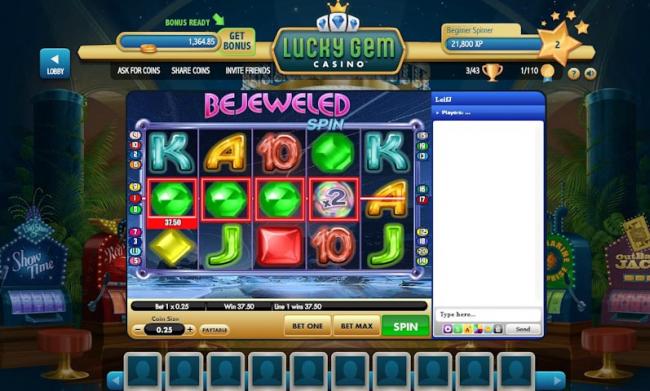 Lucky Gem Casino may claim to be a PopCap game, but it sure doesn’t feel like one

What should we make of PopCap’s Lucky Gem Casino? On the one hand, it delivers the joy of playing slots based on some of the developer’s most popular franchises. On the other, it’s hard to shake the feeling that it represents a forced attempt to cash in on growing casino craze on Facebook. That’s not to say that there’s anything wrong with this outing, but the only things that really set it apart from its competitors are welcome cameos from PopCap games and some minor social fluff. The playful creativity that we’ve come to expect from the casual juggernaut is on vacation here, and the whole project sags with the weight of timely obligation.

Perhaps I’m being a little harsh. After all, the slots aspect of the game allegedly only marks the beginning of what’s meant to be a full casino experience in the coming months, and what we have isn’t bad. The very first slot machine, for example, references none other than Bejeweled, and there’s a fleeting giddy pleasure in matching up the familiar gems to sound effects from the game proper. PopCap even has an undeniable edge on the minigames that pop up during bonus rounds in that each provides a lightweight version of the game that the slot machine references. Play the Bejeweled slot, for instance, and you might play a brief game of Bejeweled; play the Zuma slot, and you might shoot a few rounds of colored balls.

But note that “might” is the operative word here. Over 15 minutes passed before I triggered a second bonus game during my first play through, and the minigame itself lasted no more than 10 seconds.

Even progression itself is slow. While many social veterans might cheer the lack of an energy bar, they’ll yawn at the way the experience bar galumphs its way to the next level and the next available slot. And when you couple these concerns with game’s odd insistence on playing with a full screen (expect to spend many pointless seconds scrolling if you don’t) you might wonder if you’re messing with a rough draft that somehow leaked out to the public.

There’s also a global chat interface (which, oddly enough, only appears in the full-screen mode), but conversations seem sparse and limited to off-color quips about the gameplay. Beyond that, Lucky Gem‘s social features hinge on achievements, basic leaderboards, and the usual option to send your buddies a few coins. 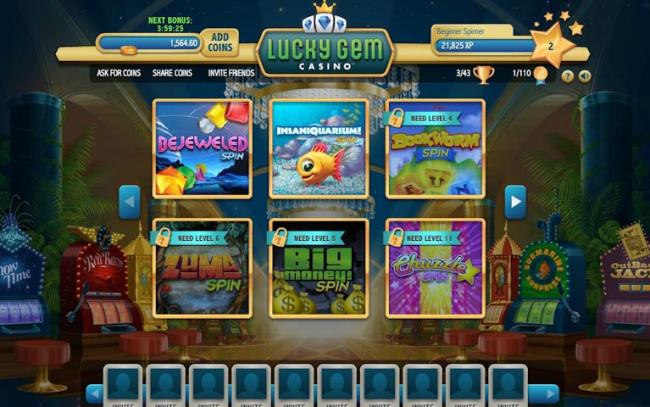 The bugless presentation and general level or polish might entice some PopCap fans who haven’t quite bought into the social casino craze, but let’s just hope that they know how to play if they do – Lucky Gem‘s rules are buried in a FAQ on a separate site and evoke a sense of “fun” as successfully as a 19th century treatise on the anatomy of barnacles.

I sometimes found myself wondering if Lucky Gem Casino is really a PopCap game. Considering that Bejeweled Blitz hands out powerups as frequently as Farmville begs to post on your Facebook wall, it’s strange to find them all but absent here. This isn’t fun; this is pressing a button over and over and hoping that you get to play a five second game of Bejeweled. If I wanted to do that, I’ll head over to Bejeweled Blitz and get 55 more seconds of gameplay for my button mashing efforts, complete with the occasional desire to fork out real money to play more. Were it not for a strained laugh about the similarity of the game’s name to a Kingsley Amis novel, I’d be tempted to claim that I didn’t have fun in Lucky Gem Casino at all.