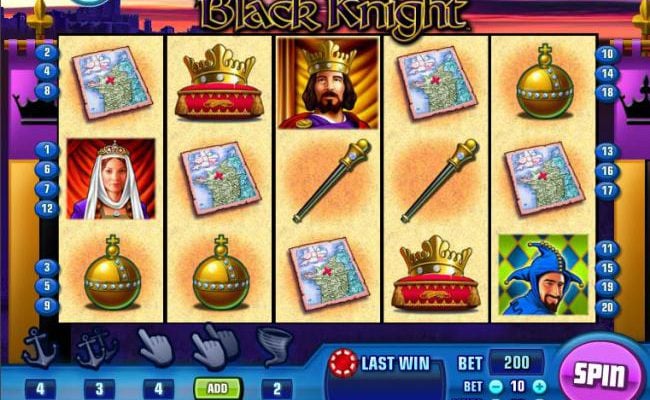 Put aside the rather unfortunate timing of its name, and you’ll likely find Lucky Cruise a decent rookie to the growing fleet of slot-based casino games on Facebook. Not only does it feature the usual assorted menagerie of slot machines that define its competitors, but it also boasts a lower entry bar in the form of generous powerups, effective tutorials, and a welcome method of regaining some chips once your ship’s out of luck. Even genre veterans might find much to enjoy here, particularly if you like your slots straight and relatively free of social gaming frippery.

If only it had a bit more soul. Stronger games such as 3D Slots brim with unforgettably animated machines; Lucky Cruise contents itself with generic reels and minimalist backgrounds. Even some of the genre’s worst titles toy with surprise minigames that relieve the inevitable tedium of slots; Lucky Cruise makes you part with your one-armed bandit before you can sample the game’s few other diversions. In a social genre that’s characterized by nothing so much as the possibility of plunking out real cash for nothing tangible in return, those decisions could prove an iceberg for Large Animal Games and WMG Gaming. 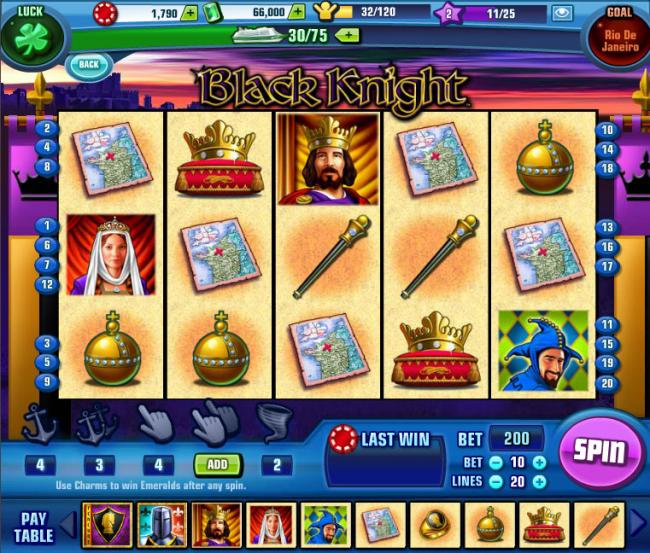 Yet Lucky Cruise redeems itself through its generosity. Many games from this genre dangle the best bonuses from a string of Facebook credits, and thus leave dominance on the weekly leaderboards in the hands of players who are willing to pay for them. Instead, true to its name, Lucky Cruise allows its players a chance at winning everything that would normally require parting with a few Facebook credits. This, in other words, is slots for Everyman. And the goodies involved range from power-ups that improve your luck by nudging two reels of your choice or allowing an extra spin on a single reel.

Luck, in fact, is what powers the ship. To even get a chance of winning these power-ups, you must first set sail for a handful of exotic locales, with the “luck” gained from wins determining how quickly you arrive. Once your luck bar fills up, you disembark and play a simple themed game of flipping tiles in order to find power-ups or extra chips hidden beneath them. Uncovering a skull will end the game and cheat you of half of your potential winnings, but the game makes it possible to overcome a losing streak if you cash in before revealing the skull. Just keep in mind that the journey far outweighs the destination. A visit to Cyprus, to cite but one example, involves little more viewing stock photos of a Corinthian column and an archaeological site that’s actually in Greece. 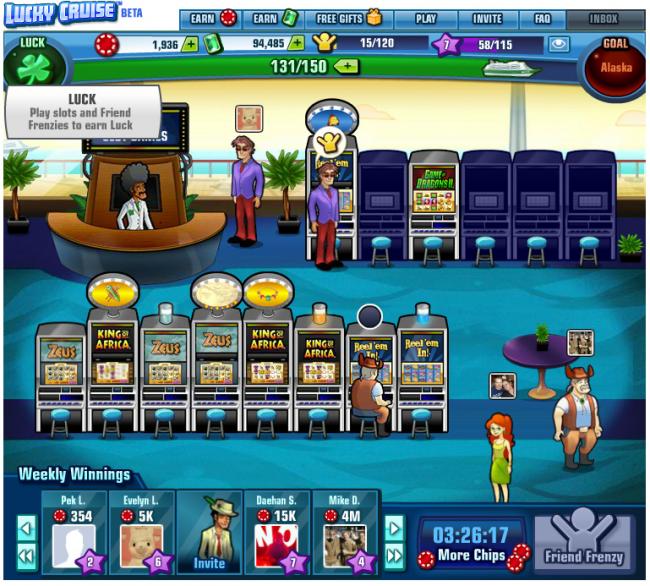 But at least it makes an attempt to be social behind the usual leaderboards and gift swapping. While you’re at sea, AI avatars of all your Facebook friends (including those that don’t play) roam a plain casino floor, and you can then match them with the slot machine of your choice for a short play session. In a nod to harvesting games, they drop a stash of social points once they’re finished, and you gain more points depending on how many friends actually play with you. Filling up the social bar then triggers the “Friend Frenzy” game, which consists of little more than matching up avatars with their favorite slots and harvesting luck from them before the timer runs out. If you finish, you’ll find yourself much closer to your next stock photo vacation on the Luck Boat.

Still, that’s about as playful as Lucky Cruise allows itself to get. This is a game that caters more to the people working their biceps on the slots than to the snapshotters on the shore. There’s no room here for cutesy minigames while playing King of Africa or gambling trivia about Rio; Lucky Cruise, for all its generosity, believes that playing slots is serious business. And that’s at once its greatest feature and its greatest failure. Since there’s no real money rewarded here, diehards of age might be best served by going to their local casino, and casual slotters, meanwhile, will be better served by playing 3D Slots or its many cousins.

If nothing else, Lucky Cruise is a nice change of scenery, and likely the most user-friendly entrance to the basic concepts on Facebook. So if you’re just now approaching the genre for the first time, well, lucky you.