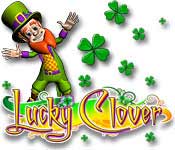 If every day is St. Patrick’s Day in your world, or you fancy you’ve got the luck of the Irish, don’t hesitate to have a look at Lucky Clover. An all-new hidden object game that challenges you to find hearts, stars, moons and more throughout the Emerald Isle, it’s guaranteed to leave certain gamers green with envy. Then again, be forewarned: If the thought of listening to toe-tapping jigs and people speaking in stereotypical Celtic brogues at any great length sounds less than appealing, the title may also have you seeing red as well.

Right at the tale’s outset, you’ll be introduced to its ubiquitous hero, Shamrock the leprechaun, a squeaky-voiced chatterbox of a mascot who makes an appearance on every screen. As you voyage over the rainbow, he’ll be there to introduce basic play mechanics, shout out encouragement and even spout off witty non sequiturs, e.g. “Everything in moderation – including moderation,” or “Early to bed, early to rise, makes people suspicious.” How soon you want to strangle the jolly little chap depends on how big a sucker you are for garishly-colored special effects and repetitious chuckles. (Translation: Roughly anywhere between ten seconds and as many minutes.)

Be that as it may, actual play itself isn’t half-bad, but neither will it raise any eyebrows after the launch of such genre-defining competitors such as Mystery Case Files: Madame Fate. Basically, provided one or more locations – grassy knolls inhabited by giant sheep, crumbling castles where wizards and dragons wander… all either computerized cartoon-style renderings or PhotoShop-enhanced real-world backdrops – you’ll simply choose a destination and hunt for concealed items. Where the title may endear itself to players is in the ease with which you can generally spot these targets, and the variety of areas to investigate. (Literally hundreds of stage backdrops are presented.) Where it’ll infuriate is in the fact that you’re pretty much stuck hunting one single shape per stage at a time, be it a butterfly or horseshoe.

Naturally, of course, hints are also provided in limited supply, at a set cost in gold, with your stocks of the precious metal replenished every time a sought after item is found. And the more levels you complete, the more chances you’ll enjoy to play randomized games of chance where picking a particular option from one of three hidden containers can win you a collectible goodie of dubious origin. (Think golf carts, sunflowers, VCRs, accordions, boom boxes, lava lamps, helicopters, etc.)

We certainly have to award points for uniqueness… there are few titles that devote themselves so wholly and effectively towards a single theme, and one so eclectic at that. Randomized challenges also add an element of extended replay value to the mix. Even so, it’s hard to comprehend who’d really get into the quest on a long-term basis, with general appeal fading quickly, making the outing more novelty item than genuine addiction.

The game’s overall presentation, though relatively polished, also has an air of the gaudy and shameless about it that’s sure to be a turn off to more sophisticated audiences as well. And with the publisher’s own feature list including such dubious talking points as “never ending hilarious Leprechaun jokes and comedy [sic]”, well… that’s about as close as one can honestly come here to truth in advertising.

Provided such sickly-sweet stereotyping and corny humor doesn’t rub you the wrong way, hey… dive in, and be our guest, Mr. or Mrs. O’Malley. Far be it from us to insinuate that this is an underperforming title, just one geared to a very specific niche and personality type. Whether you’ll ultimately be drawn to or repelled from Lucky Clover simply depends on your tolerance for cheap laughs and pleasing, but mostly routine scavenger hunts. And you can bet your Blarney Stone on that.