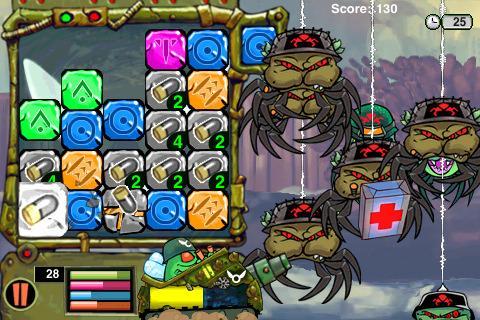 Puzzle hybrids have been all the rage in recent years. Whether it’s the RPG kind like Puzzle Quest or Sword & Poker, or the action kind like Henry Hatsworth in the Puzzling Adventure, puzzle hybrids have provided players with some of the most memorable mash-ups of recent years. Lt. Fly: Rise of the Arachnids tries to join those ranks, but falls short despite some enjoyable elements.

Combining action and puzzle gameplay, Lt. Fly: Rise of the Arachnids tasks players to protect a nation of flies from the impending spider invasion. You’ll take up the wings of Lt. Fly, a soldier who operates a annon to attack spiders that are invading from the top of the right side of the screen. Lt. Fly’s ammo is controlled by the puzzle portion of the game, which occupies the left.

To create more ammo, you’ll need to match 4 or more blocks of the same color and make them disappear. Unlike most match games you won’t be moving the blocks to make matches, you’ll be changing their color. A new color appears at the top of the screen to let you know what color your next tap will create. As you clear away the colored blocks, special ammo blocks will make their way to the bottom of the screen. Once they reach the bottom they’ll disappear and the ammo will be added to your inventory.

Getting those ammo blocks to the bottom of the screen is tough, but it’s also very necessary. Lt. Fly’s cannon seems to run out of ammo fairly quickly, so every shot and piece of ammunition counts. To take out the spiders players will need to tap in their direction to shoot the cannon. Special weapons like laser beams and mud clots will be unlocked as the game progresses, but will use the matched colors as fuel rather than the ammo blocks themselves.

The Achilles heel of Lt. Fly: Rise of the Arachnids is that it demands too much of the player’s attention. The game forces you to focus on three areas of the screen at once, and it’s a tremendously difficult task to accomplish. You’ll need to be fighting off spiders on the right side of the screen, completing puzzles on the left, and trying to keep an eye on the next block color by looking at the top center of the screen. With your focus spread so thing, there’s no way to really excel at any one aspect of the game. Spend too much time fighting spiders and you’ll run out of ammo. Spend too much time matching blocks and you’ll let too many spiders slip past, draining your health and ending the game.

As if this wasn’t bad enough, the difficulty in this game is woefully unbalanced, making it a near impossible task to newcomers. Even on the easiest setting the second world takes a tremendous amount of patience and skill to complete – and that’s only the second of five.

Creating a puzzle/action hybrid is a challenging affair. Few developers have been able to pull it off, and while Lt. Fly: Rise of the Arachnids certainly makes a noble attempt, asking you to balance two impossibly different tasks simultaneously is just a recipe for frustration. As individual pieces, both elements of the game had a great deal of charm. If they’d come up with a strategy to alternate between the two like the popular hybrid Henry Hatsworth did on the DS, things would have been much more manageable. As it stands though, Lt. Fly: Rise of the Arachnids simply demands too much of the player’s attention to be very much fun.