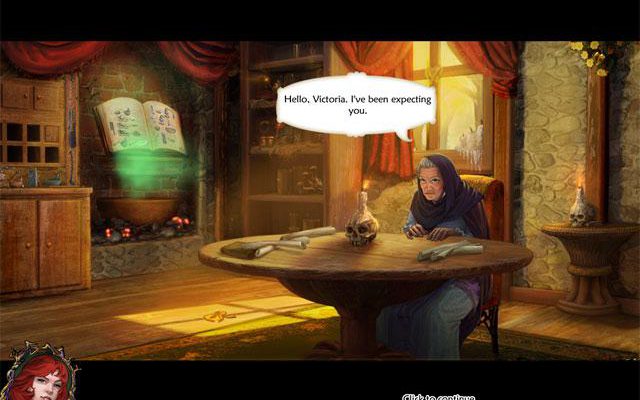 Love & Death: Bitten is the classic tale of boy meets girl, girl happens to be a witch, girl turns boy into vampire, boy terrorizes neighboring village where he meets another girl, non-witch girl falls for vampire boy. The story is a bit on the cheesy side, to be sure, but the game itself is simply fantastic.

As Victoria, you set out to defeat the vampire Damon, but soon find yourself falling for him. Perhaps it’s the way the moonlight reflects off his fangs or the way he lovingly threatens to suck the life right out of you, but in any event, you soon find yourself helping him in his quest to find the potion that will free him of the witch’s control and restore his humanity. After a quick run through town and the local wise woman’s house, you’ll spend much of the game in the witch Celeste’s castle, finding the keys Damon needs to unlock his salvation. 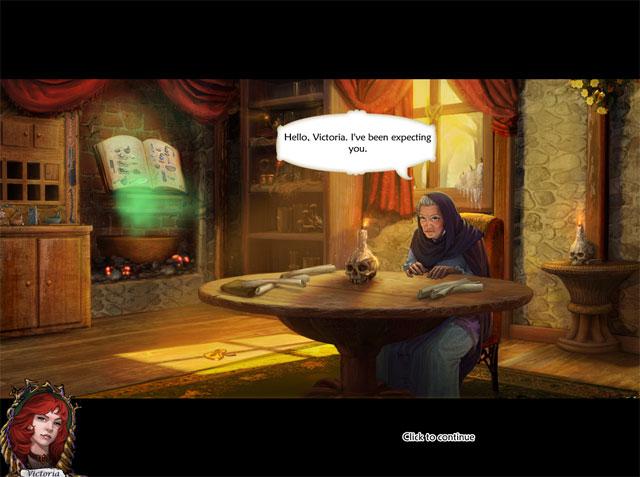 You’ll take turns playing as Victoria and Damon, as each can reach areas that the other cannot. He’s not so good in sunshine, for example, but can fly to high-up areas. You’ll visit each location several times, but won’t have to engage in an item search until a crow sweeps in with a list of objects that need finding. Each object hunt has twelve items to locate, though some are multiples and others require specific actions, such as returning pins to a pincushion or fruit to a bowl. Sometimes what you’re being asked to do is obvious, but in others you’ll have to use your observational skills to reason out what the task might be. Of course, if you’re absolutely stumped, you can always just use a rechargeable hint.

The hints are somewhat less helpful when it comes to solving the game’s many excellent puzzles, however. One such puzzle, which involves placing discs in a specific sequence, was proving thorny, so I asked for a hint. The game told me that the discs needed to be placed in a certain order, and that I should try to figure out the relationship between the designs on them. Gee, thanks. I’d never have guessed that on my own.

Love & Death is also sometimes a bit unclear as to how you should be proceeding. Although it adds to the challenge and stimulates your brain in very pleasing ways, players used to being nudged in the right direction may find themselves stumped more than once. It might be obvious what you need to do – find the discs to put in that sequence, for example – but what isn’t immediately obvious is how you should go about doing it. Victoria or Damon will usually think something along the lines of “I should search this room more thoroughly,” though, which is helpful. 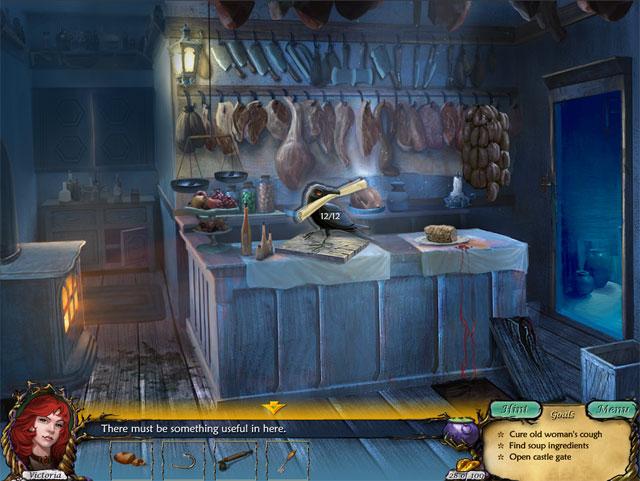 Finding 100 of the golden leaves that are sprinkled throughout each environment is an optional minigame in Love & Death. The good news is that there are more leaves to find than you actually need, so it’s ok if you miss a few here and there. The bad news is that the reward you get for finding them – the ability to “glimpse the future” is rather unsatisfying. Finding 100 doesn’t require a Herculean effort, so you may as well do it, but be prepared for a bit of a letdown.

The game relies on collecting various bits and bobs – cogs for the clock, flowers for a potion, coins for a machine – a bit too much, but does an excellent job of mixing up tasks so that it never feels repetitious. The story is pretty over the top, and you have to wonder why Celeste keeps a potion around that will change Damon back if she doesn’t want him trying to take it, but it’s a cheesy good time anyway. Love & Death will take you a good long while to finish, is gorgeous, and just unusual enough to keep you on your toes. Just watch your neck.