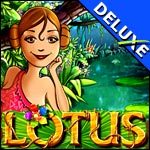 The goal of the game is to remove floating lotus flowers on a pond by correctly matching two identical ones. All flowers have five pedals, but they vary in color, so you must have a keen eye to pick out the perfect pairs (example: three touching yellow pedals and two blue ones) before the stringed lotus flowers drift towards the swirling whirlpool.

Consider Lotus Deluxe a clever mix of a Mahjong-type game, which tasks players to find pairs of identical tiles on a board, and Zuma-like game, where connected objects snake out onto the screen in a specific pattern and all objects must be removed before it reaches the end.

But a word of warning: don’t let the floating flowers, tranquil music and relaxing sound effects fool you – Lotus Deluxe is one tough puzzler – so only those looking for a real challenge may get something out of this game.

While players tackle level after level in the main Adventure mode (with 75 levels in total), bonus flowers, special power-ups and helpful friends will appear to make the game more interesting.

For example, a single flower may blossom on the pond, which you can match using one from the chained flowers for extra points. Or a closed flower not yet in full bloom may appear on your string; the only way to open it and find its match is to remove the flowers on each side of it.

Other bonuses, activated once the flowers on each side of it are removed from the pond, may do one of a few things: reverse the direction of the lotus flowers, rearrange them, add more time to the clock, earn players an extra life or give gamers an extra hint they can use when stuck.

Later on in the game, lotuses with rainbow leaves will appear, which can be used as a kind of joker or wild card as you can combine it with any other colored leaves. Similarly, A lotus with one or more white leaves will assume the color of the one it’s paired with. White-leaved flowers don’t disappear from the pond but turn into the flower you pair it with.

And did we mention the dragonflies? These critters buzz around your lotus flowers and help out in various ways. As long as a green dragonfly is present you’ll receive double the points for each match. A blue dragonfly, on the other hand, slows down the line of floating lotus flowers to give you more time, while a purple dragonfly will push the line back for you. Orange dragonflies, a special treat, will remove flowers for you when you click on their match. You get the idea.

Bonus points are awarded for making a new match immediately after a preceding one, but for some reason you only have a split second to do so (the developers should’ve given players an extra second or two to chain pairs). That said, I’m proud of my personal best of 11 quickly-matched consecutive pairs (woo hoo!).

The optional Challenge mode, which becomes unlocked after playing a few rounds of the Adventure mode, lets gamers see how many lotus flowers they can match from a never-ending stream of them snaking out onto the screen.

Though Zylom should be commended for adding a new twist on both the Mahjong and Zuma-style puzzle games (no small feat), Lotus Deluxe is quite challenging as it can be tough to find a lotus match when they all tend to look alike – and you’re under time pressure, to boot. But this latest Zylom game is sure to win over its share of players in search of a fun and frantic puzzler.