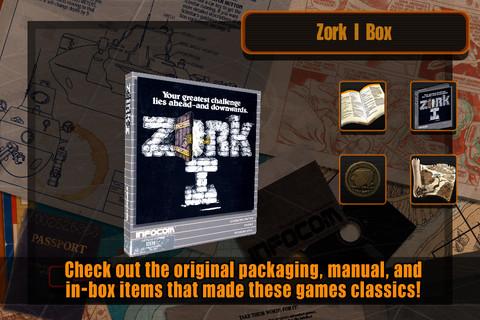 An attractive package featuring some classic text adventures, but the interface is a little too slow for comfort.

Interactive fiction has been around for decades, evolving in the early days of computers to provide rich environments without the need for fancy graphics. The genre has waxed and waned in popularity over time, but some of the most treasured releases have come from a company called Infocom. Now you get to experience some those classic adventures right on your high-tech mobile device!

The original Lost Treasures of Infocom was released in 1991, gathering together 20 of the most popular works of interactive fiction at the time, including the Zork series and The Hitchhiker’s Guide to the Galaxy. The new incarnation of Lost Treasures of Infocom brings most of the 1991 collection back to life for iOS, adding a handful of extra games along with heaps of bonus content, including maps, hint guides, and digital scans of “feelies” (bonuses included in the original packaging, like printed maps, coins, or other items).

Firing up a text adventure is a simple affair, and even though the interface is a bit on the sluggish side, it’s got a nice overall look. Scroll through the list of games and tap the one you want to play. A window opens showing a few options before you dive in, such as release information, maps, and extra content to peruse. Only the original Zork is available from the start; the rest of the games must be nabbed through in-app purchases. You can grab the whole lot for a discounted price or shop for bundles by genre. Either way, the games you’re getting have proven themselves to be incredibly deep, satisfying experiences with loads of clever puzzles and interesting characters. All you have to do is a little reading and a little typing and you’re in the game!

The traditional text-only interface has been supplemented with a few extras to facilitate playing without a physical keyboard. Auto-complete is a big help, as games recognize which items in the room or in your inventory you’re attempting to interact with and fill in the blanks with surprising accuracy. You can also access a compass to move around the environment by touch, look at maps, and even set certain words to a hotkey, all with a few taps on the screen. Best of all, Lost Treasures of Infocom offers swipeable InvisiClues that answer common questions you might have during the games. It’s a great way to provide help and hints without spoiling any solutions outright. 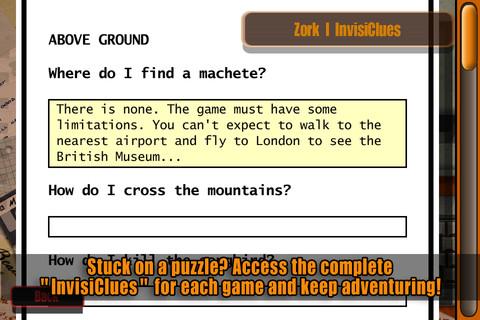 The quality of games included in Lost Treasures of Infocom could never be called into question. It’s a bit of a bummer not to see the hilarious Hitchhiker’s Guide to the Galaxy, but licensing issues are likely the cause, so don’t take it personally! And besides, there are more than two dozen games to play, ranging from mystery to sci-fi to fantasy, so it’s not like you’ll be hurting for entertainment. What we can find fault with, however, is the interface. It’s obvious the design team was going for something nostalgic and retro, but everything has a molasses-like feel to it, as if the program has to read a floppy disc for information each time you do… anything. It’s attractive to look at, but not so functional when you get down to business.

Lost Treasures of Infocom can’t quite decide which audience it’s going for: existing interactive fiction fans or new players. It tries a few ease-of-use tricks to help attract interactive fiction newbies, but it also includes legacy things like scans of feelies, something that might confuse anyone who didn’t grow up with packaged versions of the games. Between that and the desperate attempt to wiggle extra in-app purchase cash out of each user, the whole experience ends up getting in the way of enjoying the games themselves. Despite being a gateway to dozens of hours of some of the best classic text adventures ever released, this version of Lost Treasures of Infocom just doesn’t quite get things together.

A Walk in the Dark Review

The Torment of Whitewall Review