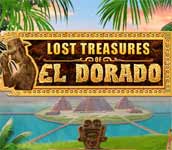 “Three-in-a-row” casual game fans have no shortage of downloadable puzzlers to click through, some not so great, others fantastic. Lost Treasures of El Dorado lies somewhere in the middle.

It’s an enjoyable game with a fun Indiana Jones-inspired story, but a very similar game launched a couple of weeks back, Heroes of Hellas, outshines Lost Treasures of El Dorado in virtually all respects.

Donning an Indiana Jones-like fedora, you’re summoned in Egypt to help find a missing woman, Alicia, who disappeared after following a newly uncovered artifact. You graciously accept the mission and whisk off to New York City to learn more about this relic, and then you’re off to France, then England, and many other destinations as you work to unravel the mystery.

In terms of gameplay, however, it’s basically the same as Heroes of Hellas: gamers see a unique-shaped grid that resembles a beehive as it’s made up of hexagons (six-sided objects). Inside each of these connected hexagons are colored items – such as red pearls, golden lion faces, pink hands, white flowers, blue gems, and so on – and you must click and hold the mouse over one of these items and move the mouse through the grid so that it connects with at least three identical adjacent shapes. When you let go of the mouse, the connected items disappear, making room for new ones that cascade down the screen.

In order to clear the level, you must destroy the gold plates behind some or all of these hexagons. You do this by successfully making these chains with at least three of the same items. In the Adventure mode, this must be completed within a predetermined time or else you must repeat the level, while the Relaxed mode removes the clock altogether.

Power-ups also appear on the board, such as exploding items that removes nearby objects or an hourglass that adds some time to your game. Some items must be brought to the bottom of the board (by making chains underneath the power-up), so it be added to your inventory to be used when you need it, including a pickaxe that can be used to break one item if you need the help.

Just as there are power-ups, there are obstacles, such as stones you need to break by making chains beside it or frozen hexagons that need to be used in a chain to break.

Players can earn Trophies to be viewed at any time from the main screen. Examples of these include a trophy for a 3x long chain with more than 10 items or for making a 10x combo.

Every few levels is a short “Concentration”-like memory game where you must click on face-down cards to reveal the item shown underneath, but unless you match a pair, they flip back face down. You start off with four cards, and then will see eight the next time around, and so on.

While Lost Treasures of El Dorado is fun – working your way through the puzzles and seeing a comic strip like story to introduce the next location – but when it comes to gameplay it’s virtually identical to Heroes of Hellas, which has a more intriguing Greek mythology theme, better graphics, better mini-games and other goodies like mythology info and the ability to create wallpaper with your solved puzzles.

Another minor issue with Lost Treasures of El Dorado is the mouse isn’t always responsive; often at the beginning of the level I found I had to click a couple of times to perform a move that should only require one click, but it didn’t detract from the game. Overall, this game is a good but not great 3-in-a-row puzzler, though it’s at least worth downloading to play the free trial.