By Robin Jackson | 13 years ago 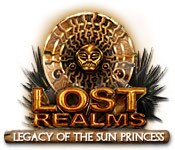 Lost Realms: Legacy of the Sun Princess is a standard hidden object game with great atmosphere and interesting characters. Unfortunately the graphics, while beautiful, don’t suit the hidden object genre as wuite a few of the individual objects are small, dark, and blurry on many computer monitors.

From characters to mini-games, everything in Lost Realms matches the story very well. A young woman has persistent dreams about a lost Incan kingdom. She finally decides to travel to Peru to investigate, and her best friend, through skeptical, invites herself along. This is the beginning of a quest, complete with a beautiful maiden as a ghostly spirit guide, to recover the pieces of the lost crown of the Incan Emperor. Although there’s not much more to the plot, it works well, and the characters are interesting.

The music is typical of folk music from the Andean region. History is pretty good for a game of this type, although there are also a number of fictional elements and a dash of magic as well. You do get a few words of Quechua and some authentic items in the search. Most players will take around 3-4 hours to complete the game.

Most items are fairly proportional and appropriate to the setting, although there are occasionally some 5-foot spoons and combs stuck to the ceiling. The artwork is absolutely beautiful, rich and detailed.

Unfortunately, though, the scenes just don’t work very well for a hidden object game. Most scenes are very dark, quite a few items are small, and the details are blurry on many monitors. In addition, an odd design choice was made to draw the scenes about 5% larger than fits the window, so there is a continual jiggle when you reach the edge as just a tiny bit more is revealed. It’s far more annoying than innovative.

There are also a number of problems with word choice. A pitcher is described as a “jar,” a slingshot is a “sling,” a strawberry is a “raspberry,” a notepad is a “notebook.” Often there is more than one item in a scene that will fit a word like “bottle” or “urn” or even “banana.”

The end result is a hidden object game that just isn’t much fun to play. Die-hard hidden object fans with monitors that don’t have the blurring problem and who don’t mind the slight jiggle, or those with a particular interest in the Andes region, may still find it worth playing through to the end, but we suspect many gamers will give up after the first 15 minutes.

We did want to mention one of the positive aspects of the game design—the hint system and mini-games are generous and very well done. As with Blue Lizard Games’ previous title, the time management game Spa Mania, the varied mini-games fit perfectly with the theme and artwork of the main story. Any mini-game in the main story can be skipped by using hints, and you can get an unlimited supply of new hints by completing one of three special mini-games. One is a test of physical dexterity, one of memory, and one an easy hidden object game. If you try one and it doesn’t work for you, you can immediately choose one of the others, or repeat a game type 2 or 3 times in a row. It’s your choice which to play and how often, so no one should run out of hints.

As for the main story mini-games, there’s a good variety with some creative flair. We especially liked a match-3 variant based on quipu strings. If you particularly enjoyed any of the mini-games, you can play them again by accessing the “log” (really a journal) from the Main Menu. This whole concept of integrated hint system and mini-game design worked very well.

Like a couple of other recent titles, really the only thing wrong with this game was some choices in the art direction. Unfortunately, that’s such a key component of any hidden object game that it’s impossible to ignore. Lost Realms: Legacy of the Sun Princess is definitely worth a try if you’re a HOG fan, but if you don’t like the graphics at the start, you should know they’re only going to get darker and smaller as you go further along in the game.

Can You See What I See? Dream Machine Review