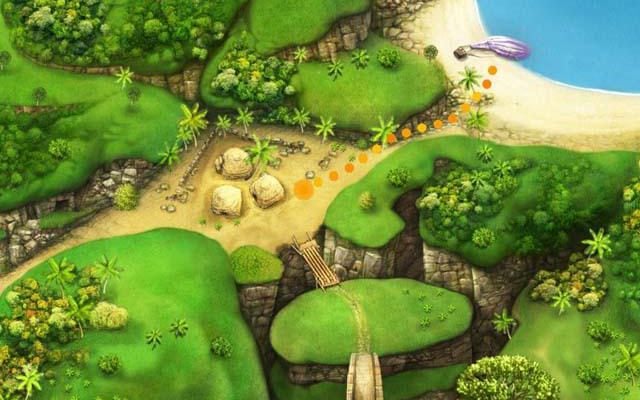 It’s tough to make a standout hidden object game these days, as it seems like a new one comes out every three and a half minutes. There’s nothing actually wrong with Lost Lagoon: The Trail of Destiny, but everything it does has been done better by another game, probably twice. It’s a perfectly competent, utterly adequate, and thoroughly forgettable game.

The game begins when your hot air balloon crashes on an apparently deserted island and you, still groggy from the knock on your head, awaken to realize you have no idea who you are or what you’re doing there. You quickly find a map that leads you to believe that you were headed to that island on purpose, and head off into the jungle to start putting the pieces of your memory back together. This involves visiting a few attractively drawn locations, such as a native hut, the beach, and the jungle path, and scouring them for a laundry list of items. 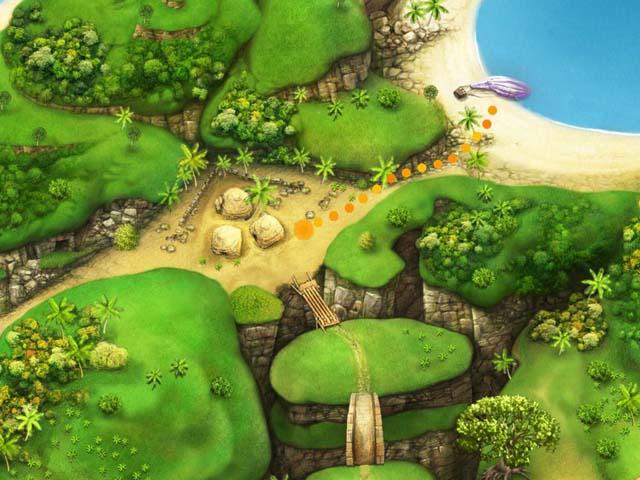 Some of the items will be added to your inventory so that you might use them to overcome obstacles at other locations. A crowbar can be used to move heavy blocks, for example, while a handy machete cuts you a path through the lush greenery. The rest are the usual mishmash of items that have no business being piled in a heap on the beach. They also tend to repeat a tiny bit; you’ll have to find enough scrolls to fill an entire medieval library, but the well-drawn art prevents the levels from feeling too samey.

Some hidden object levels include special areas in which you’ll zoom in to find objects based on their silhouettes. It’s a pleasant diversion from the rest of the item finding, even if it’s not particularly challenging. Certain areas also need a bit of fiddling before they’ll reveal their items, but it’s not always immediately obvious what those might be. Running your cursor around the environment will usually reveal your pointer changing into a hand, and there’s sometimes a telltale sparkle to point you in the right direction, but don’t be too surprised if you need to use a hint to learn where the game wants you to go.

As is the case with most hidden object games these days, Lost Lagoon also contains a smattering of puzzles, and while they’re pretty much all brain teasers you’ve seen before, they’re done quite well. It’s a shame the game doesn’t have more puzzles to offer, but not terribly surprising, because there simply wouldn’t be anywhere to put them because Lost Lagoon is incredibly short. If you lollygag, take a few breaks to stretch your legs and/or make a sandwich, your entire experience, start to finish, might clock in at three hours, tops. Maybe. If all you’re doing is playing the game, you’ll be lucky to make it to the two hour mark. 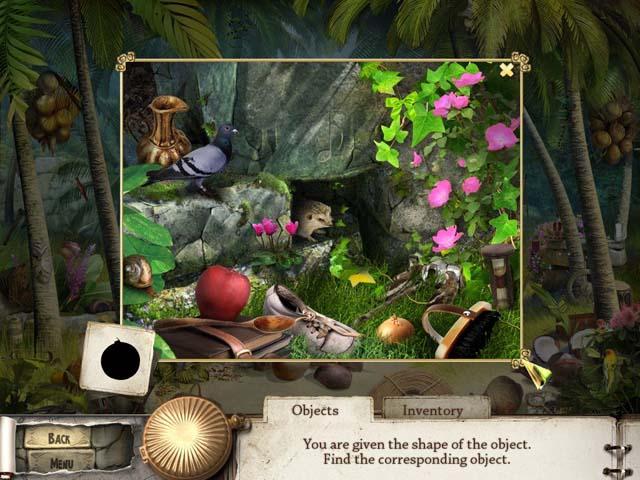 Though perhaps it’s just as well that there aren’t more levels in Lost Lagoon, because the game’s grasp on the English language starts to unravel more and more the further into it you go. Some instructions are simply worded awkwardly, objects are spelled wrong, and others are called by names that are sure to make you cock an eyebrow in wonder. You want me to find a curly whirly? Really?

All of that said, should you choose to play Lost Lagoon, you will more than likely enjoy yourself. The object lists are fairly long, the art is well done, and the environments are assembled well enough to keep your searches interesting. The story, what little there is of it, should pique your curiosity enough to at least want to discover how your adventure pans out. But honestly, there are plenty of far better hidden object games out there just waiting for you. Lost Lagoon: The Trail of Destiny is too short and too forgettable.