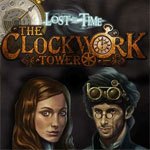 Can you help Eliza restore the proper passage of time?

Lost in Time: The Clockwork Tower is one of those games that simply works and works well throughout the vast majority of gameplay. The game’s storyline is complex, with a nice dose of humor, the hidden object scenes are simplistic yet satisfying, and there are plenty of smaller touches that make up for the game’s few flaws.

The Clockwork Tower follows a young woman named Eliza, who sneaks into her town’s clock tower and causes an accident that ruins not only the gears and mechanical portions of the clock itself, but also distorts the very fabric of time surrounding her village. With the aid of a mysterious man speaking through Eliza’s pocket watch, our heroine must make her way through her town, rescuing its citizens that have been trapped in time shifts, and all the while must collect items that will allow her to restore the clock tower to its original form.

The gameplay here isn’t so much a hidden object game as it is an adventure or puzzle title with a few hidden object scenes scattered throughout. For the hidden object fan, though, the scenes themselves are quite simplistic, consisting of relatively few items, even when including those that you need to find from a list. Said objects tend to be larger in size as well, so they are easy to spot.

The storyline in The Clockwork Tower is such that you’ll usually have more than one task to complete at any point in time. While you’ll have to complete various puzzles and find one-time use items to give to other characters, or to unlock/unblock passageways, an overarching goal will be to complete various upgrades on your pocket watch, giving it (and subsequently you) the ability to control more and more aspects of time. Finding gears throughout your journey triggers these upgrades, and the powers include the ability to fast travel to any location that you’ve previously visited, the ability to reverse or speed up time (only on specific items, where such a power is necessary), or to speak to those individuals trapped in place by the new imbalance in time.

In terms of puzzles, these are handled very well, and consist of quite a bit of variety, in addition to the standard jigsaw or tile-sliding fare that we see time and time again. Some of these puzzles are actually quite challenging (like those requiring you to move the hands of a clock while also manipulating the placement of hour markings), but you can skip them (for the most part) if you find them to be too difficult.

The in-game Hint button isn’t so useful, however, as you may find yourself at a loss for what to do next, but will have to figure this out yourself (or use a walkthrough), as the Hint button is reserved for finding items in hidden-object scenes. You can click on any of your current tasks (which are displayed in the corner of the screen), but the help you’ll receive therein is dodgy at best. This is easily the biggest flaw the game suffers from, but it definitely isn’t a deal-breaker.

In each new location you visit, you’ll find both pieces of Coal and Diamonds, which serve as a loose currency system in the game. Coal can be transformed into Diamonds, and these Diamonds can then be used to purchase tools like shovels, food items, and even extra gears that can be used elsewhere in the game.

In addition to the overall storyline, you’ll also have an achievement system to fulfill, as you’ll earn achievements for completing certain tasks (even those that don’t have to be completed to progress in the story proper). You can also purchase an in-game art book if you’d like to take another look at the game’s lovely graphics.

Overall, Lost in Time: The Clockwork Tower is one game that has so much going for it that it’s easy to look past the few flaws that might otherwise ruin the experience. The frustrating hint system can be overcome by taking a few moments to really examine your surroundings, and you’ll be glad that you did as you uncover more of the game’s story. If you’re looking for a nice balance of multiple gameplay types, all wrapped in a very enjoyable package, Lost in Time: The Clockwork Tower is a good place to start.