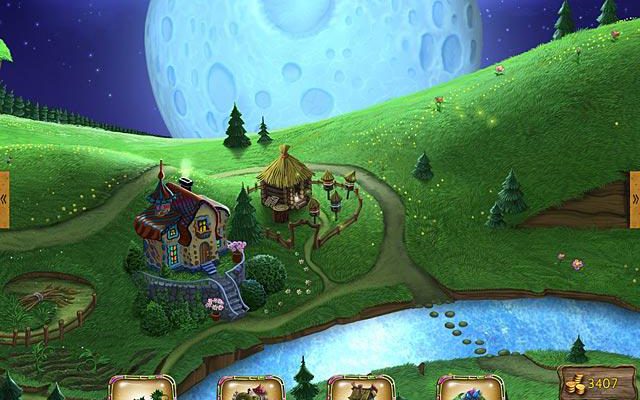 Oh, I’m sorry. “A lack of inspiration” autocorrected to “Night.”

Lost in Night is one match-three game that feels odd from the very beginning. It entirely lacks an introduction or cutscenes, and instead throws you straight into one of three match-three modes. After just a few levels, it becomes clear that Lost in Night‘s attempted inspiration are the games in the Cradle Of Rome series, as your main challenge is to build a cute and whimsical town on a grassy knoll. However, with limited instructions and no real depth of which to speak, this is one experience that’s hard to cradle. 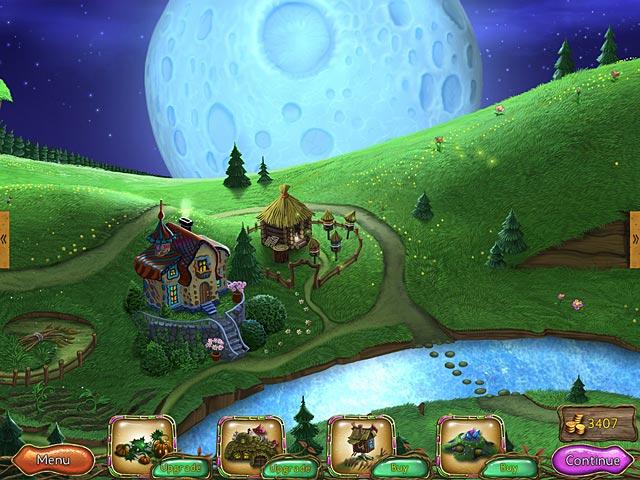 Lost in Night begins with the standard setup of match-three play, as you swap symbols such as gems and insects to make matches of three or more similar symbols either vertically or horizontally. It’s a tale that hardly needs retelling, so to speak. With this particular outing, you can play in either timed or relaxed mode. Happily, the game’s intuitive setup means that most veterans of the genre will have no problem flying through the first 15-20 levels, even with the time pressure. After that, tiles become locked in chains or hidden in barrels, so you might need to spend more time clearing them from the board. Luckily, a series of power-ups helps there as well.

These power-ups are an incredibly hollow addition, however, for more reasons than just their actual powers. They do all the typical things like clearing all symbols of a single type, or simply blowing up all symbols on a small area of the board. The rub is that none of them appear until you’ve spent quite a bit of time in a level. And since most stages are so easy to complete, you may never receive these power-ups because the levels simply didn’t last long enough. The game’s ultra-low difficulty curve becomes an impediment to the pace of design.

The other two gameplay modes will also see you removing all of the colored tiles from the board. One is completed by simply clicking on three or more matching symbols that are touching each other in some way; meanwhile, the final mode sees you clicking a dragging a line that touches at least three like symbols to destroy them. These secondary modes work fine enough, and there is a random switch between standard grids and diagonal patterns that helps to keep things a bit more interesting.  That being said, most boards are small, or otherwise lack a lot of tiles to change, so many stages can be completed in less than a minute. Again, the over simplicity and lack of depth rears its head. 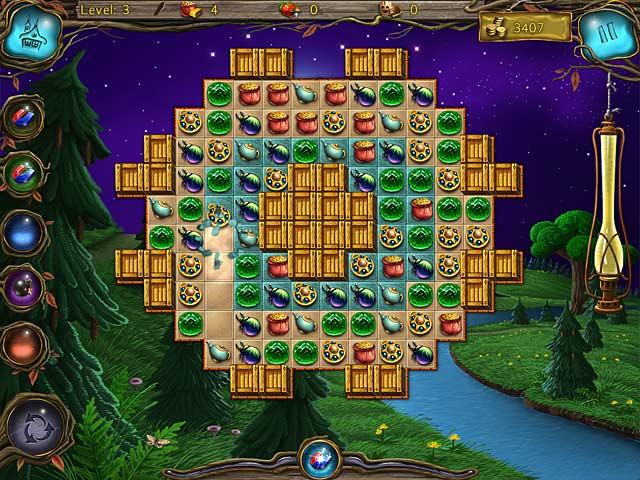 The less time it takes you to complete a level, the less resources you’ll receive at the end, too, thereby allotting you less money to purchase buildings back on the hill.

In this way, the game inadvertently encourages players to perform poorly in each level, so that they last longer and more resources can be earned. Similarly, some of the game’s trophies can only be earned by playing levels for far longer than would ever be necessary. The whole system feels like a match-three interface was concepted, but never fleshed out or made original to compensate for all the features being added.

Overall, Lost in Night is a game that just…exists. The graphics are cute and the soundtrack, while repetitive, is subtle enough to not get annoying. With that said, the game lacks characters, cutscenes, and even the most basic of storylines, which keeps it from being truly engaging. More importantly, the three different kinds of match-three play are appreciated, but contain far too little depth, making Lost in Night a shadow of the game it’s trying to imitate.