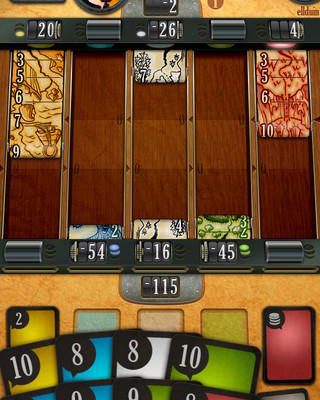 A classic game given the treatment it deserves on iOS

Lost Cities is a 2-player card game where you and your opponent vie for the most treasure points by going on adventures. There are 5 different-colored card sets numbered 2-10, each of which represents a separate treasure hunt. Players play cards in colored tracks on their side of the board to try and end the game with the most points. Of course, there’s more to it than just simply playing a bunch of cards haphazardly to get the most points.

First of all, starting a treasure trek costs money, so when you play the first card of a particular color, you immediately get -20 points, so cards played first zero out of that negative and then begin to earn you points. So, basically, you’re not going to play cards in every color in every game (I mean, you can, but it’d be tough to get them to net you a positive result).

The other important fact is that you have to play cards in ascending value order. So if you start a trek with the 4 card (giving you -16 points to start with) you can’t play the 2 or 3 card later, it always has to go up in value. Skipping numbers in-between is fine, however, so you could play 4, 7, 9, and the 10 (which is the highest) and end up with a trek total of 10 points. 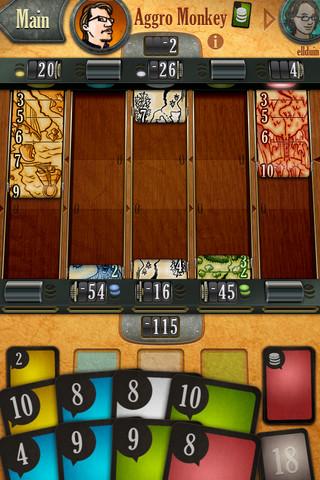 Of course, if you’re feeling really confident you can play some multipliers to a trek (up to 3), which can make the points for that color with X2, X3 or X4 if you stacked all 3! They have to be placed before any numbered cards, though, so you need to approach the situation with confidence. If you end negative, the multipliers increase the overall loss you take.

It’s an excellent balance of risk/reward, as you can guess from your starting hand which lanes you’d like to make a run at — but you’re at the mercy of the draw deck for getting some of the cards you need to make it a positive result. Like it or not some treks are going to be losers, so you can only hope to make up the points elsewhere.

Lost Cities is a classic tabletop game, and the conversion to iOS is absolutely top-notch. The visuals are fantastic (which you wouldn’t expect from a card game), and I absolutely love how each of the colored cards — when played together — create a treasure map-looking drawing of an adventure. White shows a snow trek, green a jungle safari, etc. It really helps drive the theme home, no small task given it’s just a numbers game at heart.

I often point to Carcassone when discussing how excellent a tutorial can be to both teach the how and why of a game. Lost Cities matches it, offering to either tell or show each explanation it throws your way. The developers take teaching the game very seriously, and we could always do with more of that. 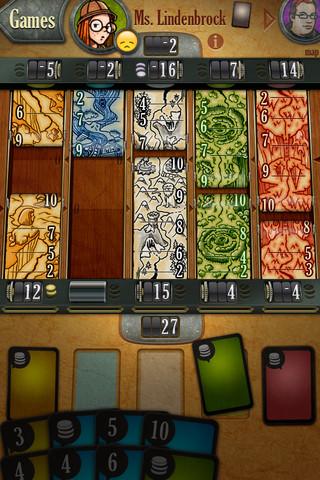 My only complaint (and it’s a small one) is that I wish the AI opponents were a bit tougher. I’ve not had much trouble beating them consistently. Luckily, however, there’s online games as well, where you can either challenge your Game Center friends or jump into an auto-match, which had me up and playing inside of 15 seconds. Can’t beat that!

At this point, I have no problem saying that developer TheCodingMonkeys has me hook, line and sinker. They’ve now brought two classic tabletop games to the digital space, and they’ve done so in grand style. Carcassone remains the board game-to-iOS conversion that I point to as the brass ring, and it shows how a digital platform can pay respect to and evolve a game to work better with a touch screen. Now, Lost Cities has achieved the same feat. I’ll happily buy whatever they release from here on out — they’ve earned an instant buy from me.