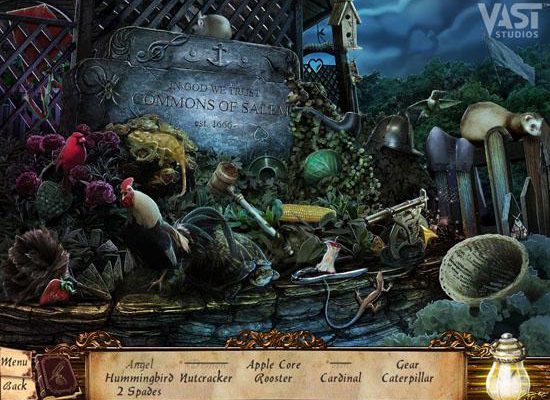 Can you save your mother from becoming a victim of the Salem Witch Trials?

The story in Lost Chronicles: Salem begins in the midst of the uproar sweeping through Salem Village in Massachusetts. Many have already been accused of witchcraft, and either imprisoned or executed for their “sins.” You play as a young girl, who, getting ready to set the table for dinner, is shocked when your house is set on fire (with you inside), your mother is declared a witch, and is torn from the house. You escape from the blaze, and from your pursuers, and are then challenged with proving your mother’s innocence before she is put on trial and executed. 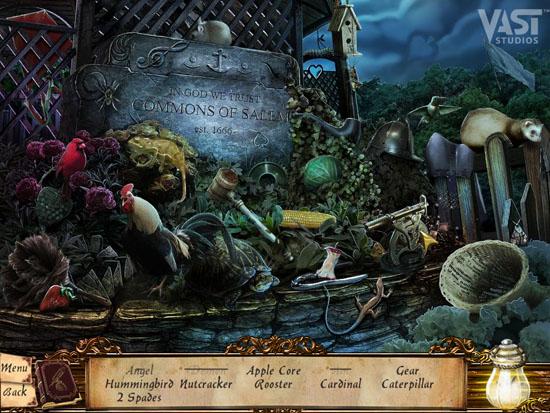 Lost Chronicles: Salem is, first and foremost, a hidden object game that sees you exploring not only Salem Village proper, but also the surrounding farmland and forest for clues as to why your mother was targeted as a witch, and for evidence that can set her free. At the end of every hidden object scene (find objects on a list), you are given an item that can be used elsewhere to help you progress on your journey. You may find a knife, for example, that can be used to cut rope blocking a doorway, or you can find a shovel that can be used to dig a key out of the ground.

In addition to the hidden object gameplay, and the backtracking that takes place with the items you find therein, there are also a handful of puzzles to solve (a tile sliding puzzle, a number puzzle not entirely unlike Sudoku, and so on), and an additional gameplay element concerning your dream-catcher – a family heirloom that your mother is able to give to you just before she is taken away.

This heirloom helps you remove “Familiars” from your path. Familiars, in the world of witchcraft, are believed to be spirits that embody animals as a way to hide from suspecting eyes as they help witches carry out their spells. Of course, being seen with a Familiar in the game is a bad thing, as you would immediately be accused of being a witch, so you can use this dream-catcher to play a short reflex mini-game that chases the Familiar away, and lessens your hint recharge time by 1 second.

Along the way, you’ll meet in-game representations of the citizens that actually lived in Salem Village during the Witch Trials. Some of these encounters are brief, while others form the main plot line of the story. In an effort to separate what is fact from what is fiction, the game includes a journal that provides encyclopedia entries of sorts, identifying the real-to-life locations that you’re searching (Salem Prison, the Putnam household, Salem Commons, etc.), and explaining the differences between certain characters’ roles in the game, and their roles in the real life trials. 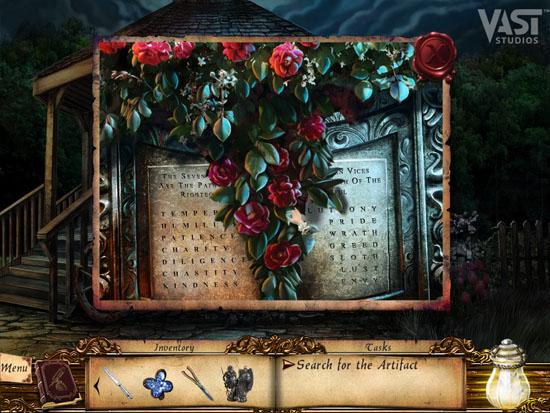 As an example, to give the game a structured, linear story, Thomas Putnam, the man who had given legal weight to the accusations of the “Afflicted Girls,” who pointed the finger at whom they believed to be a witch, is, in this case, represented more as a greedy real estate magnate who is using the Salem Witch Trials as a way to gather up land from the accused, rather than as someone who was, by all historical accounts, likely just a scared citizen who believed he was doing the right thing in the eyes of his religion.

There is more to the story than this, of course, but it is luckily all balanced in such a way as to let you know definitively what is a real-life account of the events, and what is not.

All told, you can finish the story in Lost Chronicles: Salem in around three hours, depending on how often you choose to skip puzzles or use a hint to find a hidden item. This length is actually rather unfortunate, as the gameplay is quite enjoyable, and we would have liked for it to go on a bit longer. As it stands, the ending is also a bit anti-climactic, as it doesn’t really reveal what happens to the characters other than yourself and your mother, but this is likely due to the aforementioned challenge of balancing history with fiction.

If you’re a fan of history, or just a fan of hidden object games in general, Lost Chronicles: Salem offers a great balance of both, that most anyone can jump into and enjoy. The hidden object scenes don’t overwhelm the experience, and the journal entries that describe the Witch Trials are incredibly interesting to read – the only real problem is that it doesn’t last long enough.