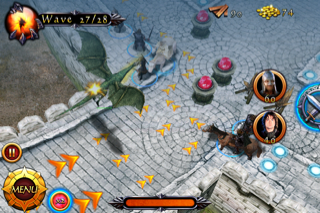 The Lord of the Rings series and tower defense games have one thing in common: giant, epic, seemingly never-ending battles. It was only a matter of time before someone realized that these two should make beautiful music together, and so Glu has released Lord of the Rings: Middle-Earth Defense, a TD title that hits notes both sweet and sour.

Taking the story that fans of the series already know and love, Middle-Earth Defense presents a variety of battle scenes straight from Lord of the Rings lore. Helm’s Deep, the Ent assault on Isengard – it’s all there, and it’s all playable – and some elements of that play are surprisingly original. Two things manage to set Middle-Earth Defense apart from the pack when viewed against other tower defense games: enemy steering and RPG-style upgrades.

Most tower defense games fall into one of two camps – those with pre-determined paths for enemy units to follow, and those where you’ll create those paths with clever unit placement. Middle-Earth Defense manages to mix both of these styles, creating something new that meets with mostly positive results. Each of the game’s maps offers multiple entrance and exit points and paths for enemies to march along, but players can minimize those paths to steer enemies towards waiting units by placing blockades along the way. Some of these blockades even offer bonus effects, like causing enemy units damage or slowing their movement.

The units in Middle-Earth Defense, too, offer something unique. Unlike most games that only limit your units to the number you can afford to buy and place, here you’ll be limited by the number of heroes and companions you have in your party. In some stages you may have as few as four units available for placement – luckily those units can become ultra-powerful through an RPG style upgrade system.

Rather than letting players simply click ‘upgrade’ on a unit, you’ll need to make decisions about just what you want to upgrade for each hero. Attack power, speed, and range can be upgraded twice for each unit, but considering how expensive the upgrades can be (especially for heroes), you’ll need to decide just which will be best for each character. You might place Aragorn, for instance, in a narrow passageway that doesn’t require much range so that you can focus on his attack power, while Legolas will benefit most from speed and range increases to keep distant enemies at bay with his arrows.

In addition to upgrades, hero units can also purchase a special power that’s unique to each. Gimli spins into an unstoppable dwarven fury, for example, while Gandalf can target an area for fire to rain down from the sky. 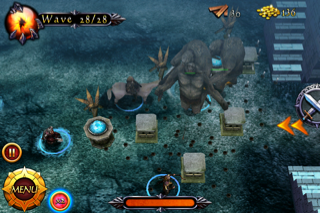 But while there may be great variety in the units players can defend with, there really isn’t any variety in the types of units they’ll fight. Visually, the armies of Sauron run the gamut – you’ll be squaring off against orcs, dragons, and Uruk-hai – but regardless of which foe you face, none of them vary in seemingly meaningful ways. There are no enemy archers, lightning fast runners, or blockade destroying behemoths – every enemy unit simply makes the slow march through the maze of death you’ve constructed. As you proceed through each level, the enemies will become a little more durable, and you’ll find that some units move a tad faster than others – but none of these little variations manage to make the least bit of difference to the strategies you’ll employ.

For tower defense combat to successfully engage players, there’s a real ‘rock, paper, scissors’ formula that it needs to follow. Lord of the Rings: Middle-Earth Defense glaringly avoids this fact. If they’d made it so that certain enemy units are resistant to magic users, or that airborne units like dragons can’t be harmed by melee weapons, players would have to use a certain amount of strategy to survive each encounter. Instead Middle-Earth Defense puts too much focus on steering enemies into your path and not enough on what you’ll do with those enemies when you get them there.

Ironically, they’ve put all the pieces in place to make this work – every unit you’ll place is either ranged, melee, or magic. It almost feels like somebody forgot to flip a switch. 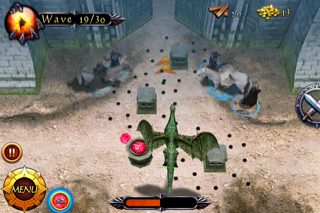 Grinding out wave after wave of familiar enemy can get a little tedious, but that doesn’t mean Lord of the Rings: Middle-Earth Defense isn’t worthy of your attention, either. This release is as much about fan service as it is about tower defense, and the Lord Of The Rings faithful will no doubt be tickled pink by how accurately the game’s main campaign follows the story. Little touches, like the Gandalf unit being disabled after his death only to be replaced a few missions later by Gandalf the White, put a big smile on this little nerds face. Middle-Earth Defense also gets bonus points for opting to splurge on the movie license rather than simply sticking with the books, which means you’ll see familiar depictions of characters used throughout.

Much like the movies, players can rest easy in knowing that this is a surprisingly long offering. With some missions lasting upwards of 20 minutes or more, completing Middle-Earth Defense should take players at least 3 or 4 hours of playtime – and thanks to varying difficulty levels and achievements to unlock, there’s plenty of additional challenge awaiting players after completing the main game – and that doesn’t even factor in the bonus ‘Challenge Mode’ that pits you against huge numbers of enemies using whichever troops you best see fit.

Knights of the Crystal Review