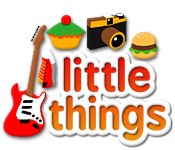 My opinion of Little Things, a hidden-object game with lovely art and refreshingly straightforward game design, wavered between like and dislike the entire time I played. In the end, I came down pretty much smack in the middle, which is bothersome because it feels like the sort of game a person ought to have a strong feeling about one way or another.

Most hidden object games provide players with a realistic scene littered with scores of random objects positioned to blend in with the environment in clever ways. That’s not the case here. In Little Things, the objects for which we are hunting actually form the greater picture.

They’re like those pictures composed of thousands of small photographs. It looks like a single, lifelike image when viewed from a distance, but the illusion disappears when viewed close-up, where we can resolve the individual photos.

Neat idea, right? I thought so. But then I began to realize the difficulty of finding specific objects in such huge jumbles of miscellany. There’s no logical place to begin your search. Whereas in a traditional hidden object game you might begin looking for a pen on a desk, here it’s much more methodical. You simply choose a place to start looking and then begin a systematic sector-by-sector scan.

What’s more, individual objects are so small that, more often than not, I couldn’t make out what I was looking at without the aid of the game’s magnifying glass. The problem with using the magnifying glass is that it can be difficult to keep track of the places you’ve already looked, as your attention is focused on what’s in the circle of glass, not what’s around it.

The small scale also renders impossible that initial quick scene scan that HOG veterans use to find many of a puzzle’s most obvious objects. Instead, each and every object on your list requires the same sort of tedious inspection described above.

Suffice to say, this is one of the few HOG games I’ve played that I really would have appreciated some powerful searching aids. Alas, the only one we’re offered is an automatic hint system involving a circular searchlight that shines on a giant swath of the picture if you haven’t clicked on anything for a while. The beam gradually narrows its focus until it encompasses only a few objects. I found it frustratingly slow and imprecise.

What bothers me most about all of this is that I love just about everything else about the game.

Its artistic style is a strange but appealing fusion of clip art and J. Otto Seibold (creator of the Mr. Lunch children’s books) minimalism, and captured my interest immediately. I genuinely looked forward to unlocking new scenes just to see what they looked like.

Plus, its uncomplicated design pulled me in from the get-go. Enter your name and the game begins. There’s no superfluous narrative or surfeit of options; just a game progress percentage meter and a place where we can check out the images and badges-which are awarded for such feats as completing a set number of puzzles without an inaccurate click-that we’ve earned. The game’s makers are clearly adherents to the KISS school of game design, and it’s appreciated.

And the bonus picture puzzles we get to solve after clearing a set number of scenes, which involve swapping and rotating squares filled with random objects in an effort to match up all of their edges, are terrific. In fact, I enjoyed them enough that they acted as adequate bait for me to continue working through the often aggravating hidden object puzzles.

Little Things gets plenty of elements right, and the few it fails to nail don’t feel like they should be deal breakers-and yet, in some ways, they are. A good hidden object game can keep me hooked for hours at a time, but whenever I tried applying myself to this game for more than 30 or 40 minutes I’d begin to feel fatigued from all of the intense, repetitive, systematic searching.