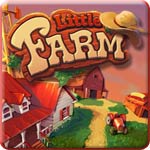 Little Farm isn’t just another match-three game – in fact, nothing happens if you match three objects. Forgive the cliché, but Little Farm is like the little match engine that could by adding a new twist to the matching genre.

Two city folk have won a rundown farm. Thankfully, Steve and Martha Norman meet farm hand Uncle Nate who teaches them how to restore the weed-covered farm and manage it. The Normans bring their kids Jake and Amy along to enjoy their newfound lives.

Their ultimate goal is to load trucks with gorgeous produce to take to the market. To move produce from the field to the truck, players find four matching corners on the field and drag the mouse over them to make a square, grabbing all the vegetables inside. It doesn’t matter if the square contains mixture of produce as long as each corner is the same vegetable or a wild square, which works like a joker or wild card. The game starts with one truck and grows to more than a dozen as players advance. If all of the trucks don’t fill up before the timer runs out, players must replay the level.

After successfully completing a level, the Normans shop in the general store for upgrades and goods with the money earned. Some supplies require having others before they become available. These supplies either add more to your produce offerings, including pumpkins, eggplants, and honeydew; or add something like water tower to help you collect your produce faster – when the water tower fills, use it to sweep up the entire field of produce. The warehouse lets you store produce for later. Trucks carry only one kind of produce.

Of course, Little Farm has bad guys, known as pests, and one act of Mother Nature. Bugs, rabbits, puddles, and crows will eat up your produce. Puddles start out as temporary and turn a square into permanent water puddles, if you don’t scoop the water fast enough. Once a produce turns into a puddle or disappears, the square is no longer available as a corner for matches.

The general store also sells goods to make pest management easier. For example, when the game starts, you have to swat the bugs three times before they go away, but buy the insecticide shed and all you have to do is spray once and the bug flies away. Bunnies take three hits before they hop away, but buying the fence cuts rabbit invasions by 70%. To scare crows, build a match around them and they go away. The store also sells a scarecrow to… well, scare crows.

Whenever you find one of Uncle Nate’s lost coins, he helps you find the next five best matches. Any time you find the best match (the largest rectangle possible), you earn more points. Make a match with a butterfly inside the match, have extra time left over on the timer, and play bonus rounds (mini-games) can rack up more points. The field shapes continually change so there’s no getting bored with the matching game especially with support from the upgrades. The upgrades, however, don’t offer too much support to make the game easy.

The mini-games are both delightful and tedious. The water mode mini-game requires pumping water to the truck, then watering the plants until the hose runs out. Pump again, water again, repeat, repeat, tedious, tedious. Rescue mode is better, but gets tiring after a few rounds. In this mode, you protect the produce by shooing the bugs and other pests without harming the butterflies.

The best one – the one that should be the only mini-game – is a collect mode that requires removing all the produce from the field within a set time. It works similarly to the main game except it’s harder to find four matching corners because of barriers. Also, once you remove produce, you rely on the color of the square instead of produce to create matches.

Four areas (levels) make a field. Upon completing a field, you have the opportunity to place an oil derrick anywhere on the land. It could be a gusher – a nice little money maker – or dry as a bone. Whatever money you get from oil is more money to invest in the farm as a bigger house and a barrier cost mega-bucks.

The game comes with story mode and harvest mode, but harvest mode requires completing story mode to unlock it – a good motivator for wanting to finish the game. Harvest features infinite play with different rules and pace. Would you be motivated to keep playing if harvest mode didn’t exist? Definitely. The combination of upgrades, the match grid, pests, mini-games, oil derricks, and story compel you to stay in the game.

The cartoons that appear between levels tell a colorful story and the music blends well. One annoyance about the storytelling is that clicking the screen or "next" button skips some of the dialog. Fast readers just want to see the next dialog box rather than skip the whole thing.

Little Farm won’t turn city folk into Old MacDonald. Instead it’ll keep players absorbed for hours. Sit back with mouse in hand and farm away with a smile.