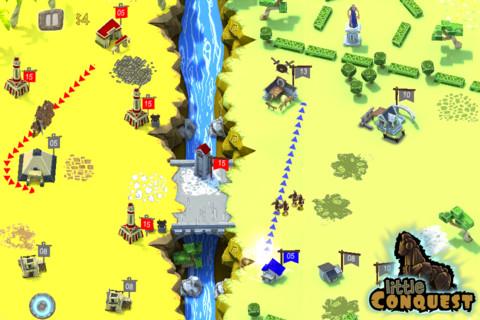 Since I do this on a regular basis, I pride myself on having a pretty fair vocabulary. Still, I’m stuck for a word that means something like the next step up from “frenetic,” and the fact that it’s even a question should tell you a lot about Little Conquest, the debut game from Chilean studio BattleBit Games. Prepare to get a finger speed workout with this real time strategy game for your iPad or iPhone.

As you may imply from the name, Little Conquest is an RTS scaled down for mobile devices. Your goal is to make your way through two campaigns, one featuring the Greeks versus the Egyptians and the other pitting the Vikings against the Normans, by passing 10 different battle maps. You do this primarily by sending out troops to take over all of the structures on the opposing side, though some levels have additional goals as well.

You start each map with a certain number of structures already under your control; each with a flag listing how many units is housed inside. Tapping on any building and then tapping on a neutral or enemy building sends either half or three-quarters (your choice) of the housed troops rushing over to attack the target. What happens when they get there depends on what they are and what waits for them, but it’s generally a simple numbers game. If you send six basic infantry to attack a building with eight infantry defenders, it ends in a glorious kind of mutual assured destruction, and there will be two defenders remaining.

Simple, right? It gets a little more complicated because every structure refills its troop levels at a constant rate, so by the time you send that second wave of men against a weakened building, it’s already going to be slightly stronger, so taking the brief-but-real travel time of your units into account is critical. And since the AI doesn’t simply do you the courtesy of sitting back without assaulting your side at the same time, you run the risk of leaving your buildings open to being conquered right after the troops leave the premises.

That’s the gameplay in a nutshell, and it’s nothing if not fast and furious. There are also different troop types to consider, like the minotaurs in the first campaign that can take out more than one defender each and magic users that can defend units or attack enemy buildings directly. Resource management also makes a cameo appearance in the form of farms that you can tap for coins, which in turn allow you to upgrade some buildings to give them more capacity or stronger units. It would be nice if those aspects of the game played even larger roles, but they get somewhat lost in the constant flow of tapping and tiny soldiers charging to and fro.

Little Conquest has three difficulty settings, which should challenge just about anyone shy of a pro StarCraft player. One gets the sneaky suspicion that the harder settings simply “cheat” by having their buildings refill faster than yours, but there’s no question it works to frazzle you effectively. In fact the game plays so quickly that truly casual gamers are likely to find the experience frustrating, and not in a “roll up your sleeves, get your determined face on and try again” type of way. 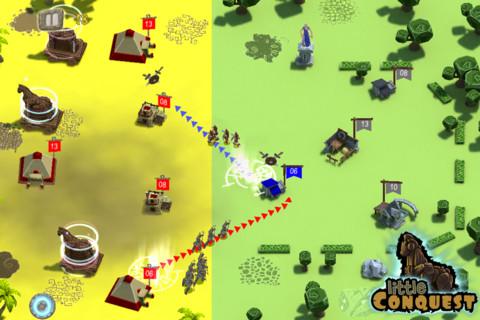 There’s another game mode that holds incredible promise, which is online multiplayer with voice chat. The thought of being able to talk smack while sending minotaurs to trample my friends sounds incredible, and the game syncs with the iOS Game Center to try to find you a playing partner if you don’t have friends online. Currently, the big problem is that there aren’t enough random people playing Little Conquest to find a game most of the time, rendering this mode mostly hypothetical for the time being.

In either mode, the game looks good, with attention to detail that shows in things like trees casting little shadows. It sounds even better, which is impressive for a small studio, though you may tire of the soundtrack after extended play sessions.

The only question is who’s going to be logging those long sessions. Little Conquest feels a little too intimidating for the casual crowd yet not deep enough for people who really love their RTS games. BattleBit still deserves an ‘A’ for effort for taking a shot at a genre that is difficult to make work for mobile gaming – and another one for making me bust out my thesaurus.