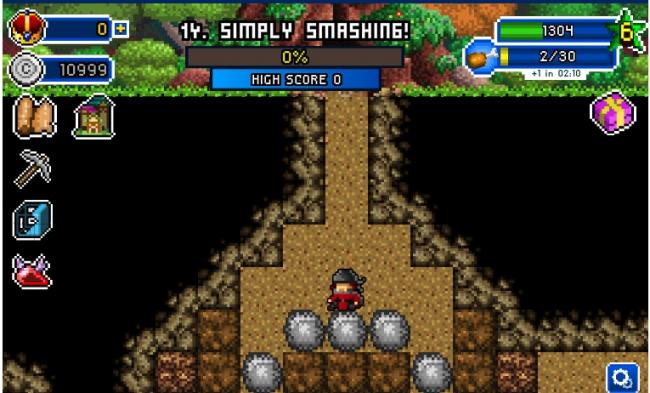 Little Cave Hero is a game that borrows heavily from others, yet still manages to feel fresh and interesting. It sports the pixelated style of classic adventure and role-playing games, but with gameplay that resembles social-style treasure hunting games. And when you throw in a unique puzzle element and a snarky, self-referential sense of humor, you end up with a game that’s as funny as it is fun.

You play as the titular diminutive hero who is tasked with fixing up a once bustling village. And since there’s nothing left of the village, you’ve got a lot of work ahead of you. In order to earn the money and many of the supplies you’ll need you have to venture off into the caves to explore. There’s an occaisionally helpful grumpy old man to help you along and eventually you’ll even get a little pet monster named Lunch.

The story is light, but the game is still full of character. And this is due largely to the dialog. The grumpy old man, in particular, is hilarious, spouting off one liners and bizarre bits of dialog with regularity. But pretty much everyone you come across in the game is a goofy twist on a videogame cliche. It goes without saying that this is a game that doesn’t take itself too seriously.

Exploring caves works in some ways like what you’ll find in a more traditional treasure hunting game on Facebook. That means that each cave is divided into squares and you’ll need to click on them to explore. But the goal isn’t necessarily to search every nook and cranny of the cave. At least not at first. Your initial goal is to find the quickest and most efficient way to your goal, which is usually a treasure chest of some sort.

You’ll need to deal with different types of debris, many of which require different tools to clear away, as well as obstacles like falling boulders, flying arrows, and giant slugs. Once you reach your destination you’ll be given a score and a reward depending on your performance, and then you can go back and re-explore, finding all of the goodies you missed the first time around. The whole scoring mechanic really gives the exploration a puzzle-game feel, since you have to think about each of your actions as opposed to just randomly clicking. 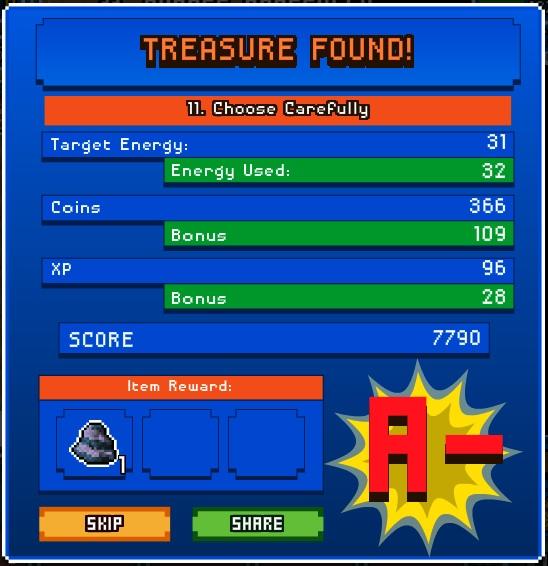 The money you earn exploring can then be invested into building up your new town. Each type of building has a purpose, whether it’s a farm that produces population-increasing food or a factory that can make a pickaxe to help you explore further. You can, of course, visit your friends’ towns as well and clean up debris to earn a bonus.

Aside from the character dialog, what really lends Little Cave Hero its character is its sense of style, which is decidedly retro. The game looks as if it could’ve been released on the Super Nintendo, and the art evokes much of what has pixel art such an enduring visual style. Each of the character sprites looks unique and distinct and even the music feels old-school, with victory tunes that makes you feel as though you’re in a Legend of Zelda game.

While the gameplay is fun, is does get a bit repetitive after some time, but Little Cave Hero more than makes up for this with sheer style and charm. You may be able to spot all kinds of influences while playing, but the overall experience feels decidedly different.

Cargo! – The Quest for Gravity Review