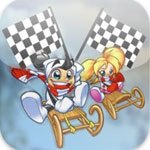 With more than a touch of Indiana Jones magic about it, if nothing else, Line Racer has made many a man's boyhood dreams come true. No, it doesn't help you pick up the girl before the end of the movie, nor does it aid you in defeating your nemesis by the skin of your teeth, but it does recapture Dr. Jone's talent for finding that finite point between sweet success and catastrophic failure. Temple of Doom fans pay attention: this is your mine-cart moment.

In much the same manner as Digital Chocolate's Rollercoaster Rush series, Liner Racer recaptures that temple tearaway by charging you with taking a risk or two, riding a sled as fast as you dare across a series of hectic 2D tracks full of jumps, loops and steep slopes. It's a set-up that calls on its players to find a unique balance between going for broke and biding their time, too much haste resulting in a crash or twenty, conversely playing it too safe leaving you at the back of the pack.

In truth, play relies on you picking your moments wisely, building up speed and leaping off the track to fly through the air at the times where you're least likely up head over heels when you hit the ground. Get it wrong, and you can find yourself way behind your opponents before you've even begun.

The controls, too, rely on an equal amount of balance, buttons on screen controlling both your pace and direction, tipping the phone giving your sledge an angle, the idea being to give it the perfect slant for a smooth touchdown when heading back to ground level. And, though Line Racer only comes with four standard tracks, its level editor mode – levels which can be shared with players around the globe – seemingly encourages its fanbase to go a little wild, trying out loops and death-defying drops a go go.

But it's the making, and perhaps breaking, of these tracks that is the chink in Line Racer's armor. With no instructions whatsoever, fathoming just how to put your ideas in motion isn't entirely obvious to the layman. Sadly, too, tipping Liner Racer's sleds can have some unexpected and unpredictable results, trying to match the angle of the floor you're landing on bizarrely often resulting in a calamitous crash, whereas heading head-first can often work in your favour, the sledge randomly and entirely unnaturally finding its feet almost on its own.

That said, you have to question just how serious players are meant to take Line Racer, its courses short and almost instantly disposable, the competition restricted to the computer's or online opponents' times played out as on-track ghosts. This is, without doubt, a quick-fix racer, one to be explored and messed around with in short bursts, but not one to dedicate masses of time to, trying to figure out just how to reach that oh-so-perfect balance sometimes a tiresome task. Doing so turns Line Racer into a bit of a chore – this is a game to be celebrated, rather than picked apart.

But such sobriety doesn't exclude Line Racer entirely. There's no doubt, this is a title literally bursting with fun and with bags of potential, but while the idea behind is one easy to pick up, anyone intending to spend anything beyond a cursory amount of time taking to its tracks will find it a touch frustrating to truly master. Likewise, while its editor mode hints at a valiant attempt to woo a community of gamers that will inevitably be drawn to it, like Line Racer as a whole, it doesn't quite feel like the finished article, an impressive leap of faith tainted by a slightly dodgy landing.