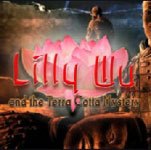 Most people trust the National Geographic brand, which means there’s a sizeable built-in audience for a game that uses the magazine’s photography and writing as its foundation. Lilly Wu and the Terra Cotta Mystery, a new hidden object game published by National Geographic Games that turns the death of Chinese emperor Qin Shihuangdi into a whodunit, plays to this audience to mixed effect.

Players take on the role of Lilly Wu, a forensic archaeologist with a preternatural talent for discerning ancient events based on centuries-old evidence. After being called in to examine the tomb of a Chinese emperor famous for initiating such ancient wonders as the Great Wall of China and the famed terra cotta army, she quickly determines that he may have been murdered and sets about figuring out who did it and how it happened. Her investigation takes her to famous historical sites around China, leads to the discovery of a secret order that has existed for millennia, and nearly results in her own murder.

It’s an interesting tale, but there is the occasional storytelling kink, perhaps the most egregious of which is a lack of a variety of renderings to show character emotions. Consequently, the pictures that pop up beside the text dialogue sometimes completely misrepresent the way the characters feel, as when we’re shown a portrait of Lilly sporting a huge grin while she yells at a man who locked her away in a cave to let her rot and die.

Still, HOGs aren’t usually remembered for story presentation; their scenes and puzzles are what make or break them. In the case of Lilly Wu and the Terra Cotta Mystery these elements neither make nor break the experience but instead leave it just a little bit fractured.

A typical chapter begins with Lilly in a single location. Players use her phone’s camera to locate an area of interest by following a hot/cold meter. Once we’ve found what we’re looking for we’re provided a few objects to search out, the images of which are organized in a tab at the bottom of the screen. These objects—say, an iron stake, a hammer, and a shovel—can then be combined and used in the environment—which, in the case of our example, might result in the removal of some loose stones revealing a new room.

As the chapter progresses we use the phone to create more tabbed groups of objects and apply found objects to reveal more clues and new rooms. Near the end of the chapter Lilly will often be forced to imagine the scenes we just explored the way they were thousands of years ago to recreate past events, resulting in more objects to find and usually a pivotal plot point or two. The occasional bonus puzzle—like a chess challenge or a scale puzzle—is thrown in along the way.

The overall design is relatively complex and can be a bit challenging when you start playing, but I managed to get into the swing of things within a few chapters, eventually finding a nice rhythm. It helps that all of the objects we look for are appropriate to their scenes—you’re going to be looking for dragon statues and tools in the game’s ruins, not spare tires and lipsticks.

But there are some frustrating issues. I found that some of the objects I was tasked to seek out looked nothing like the image clues I was provided. That’s just unfair. And many of the objects we need to find—rocks, wooden sticks, rags—are very indistinct and located in rooms filled with other objects that match the same description.

That’s not to say it’s a hard game. I was able to find most items in seconds, and a quickly recharging hint button made sure I was never stuck for long. However, I was occasionally frustrated when I’d click the button expecting to be shown a clue for one of the objects in my current tab—or least an item in my present room—but would instead be transported to another area where I would be shown the location of an object for which I hadn’t even begun to search and could have found easily on my own.

My greatest disappointment, though, is how little hard National Geographical material made it into the game proper. We get bits of information about Chinese history from the text dialogue (which can sometimes be difficult to sort out from the game’s fiction) and pieces of trivia appear during loading screens, and that’s about it. There are some beautiful pictures and interesting factual articles in the game’s extras menu, but if I want to just read a story and look at pictures I’ll pick up a copy of National Geographic. This is a game, and I wanted to see more National Geographic content worked into the play.

Lilly Wu and the Terra Cotta Mystery is a better-than-average HOG, but I hoped for a little more from such a prestigious license.