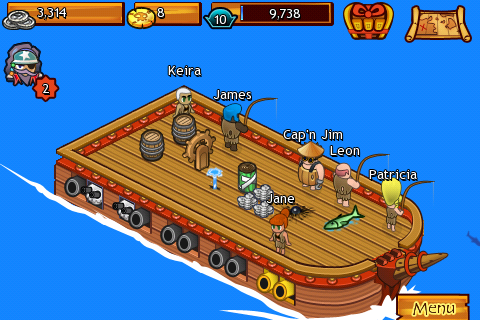 Ahoy landlubbers! I reckon by your fancy white earbuds and penchant for booty that ye be carryin’ an iPhone in yer pocket, is that correct? Well good! That means ye can have a go at joining the Lil’ Pirates!

Ahem! Sorry about that. Had some pirate talk stuck in my throat. I suppose a bad case of pirate talk is just one of the many side effects I’ve enjoyed over the past few days as I took to the seas in Lil’ Pirates, Capcom’s first foray into social gaming.

Lil’ Pirates offers up a unique blend of pre-existing social gameplay mechanics and coats it all in a fun pirate theme. Players take the role of a pirate captain looking to pillage, plunder, and do battle on the high seas. This captain, however, can’t do it alone.

After hiring a few crewmates (you’ll unlock more as you progress through the levels) you’ll send them off to complete jobs like “adopt a monkey” or “ambush scurvy dogs.” After a predetermined amount of time they’ll return to your ship, bringing experience and gold with them. You can even earn a bonus if you assign certain pirates to the jobs they like best.

Once returned from a job, they’ll need a rest before being sent out again. You can either buy them a root beer or play a game with them. The games are simple, cute mini-games that offer up a pleasant distraction from the typical one tap experience that most social games tend to offer. There’s a piratey twist on Rock, Paper, Scissors for example, and a game where you try to balance a sword longer than another pirate. Win and your crewmate will be ready for another job, and you’ll even earn a few extra root beers in the process.

The mini-games not only rest your crew, but serve to showcase how relaxed Capcom seems to be about in-app purchases. Unlike other games, where the “rest” type items run out quickly and require you to spend some real money to buy more, Lil’ Pirates not only gives you an alternative (play games instead of buying root beer) but it even rewards you with additional rest items when you win the games!

Resting your pirates and sending them for new jobs is essential, because without the gold they bring back, you’ll never be able to upgrade your ship and do battle with competing pirates. 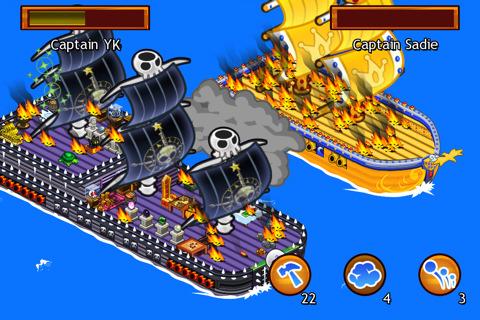 Ship battles are a simple affair, where stats are the only determining factor and battles play out in front of your eyes with minimal involvement. If you’ve bought more or better cannons than the opposing ship, you’ll almost always blast them out of the water. If you need an extra edge, you’ll occasionally have a power-up that can be tapped that will repair your ship, obscure the opponent’s vision with clouds, or up the effectiveness of your cannon fire.

Defeating an enemy ship will often result in treasure, which in turn leads up to the third real gameplay element: treasure farming. It’s a strange term (and one wholly of my creation), but it’s also a perfect description for how treasure is handled in the game. Players will visit Treasure Island, a place where new treasures can be dug up and old treasures can be buried. Burying treasure increases its value; the longer it stays buried, the more it’s worth. Players will need to come back and dig it up at a later time to get the maximum value from any given treasure – but they also need to act quickly, lest one of their neighbours steal it!

As much fun as Lil’ Pirates may be, we would have like to see the social side of it take a more dominant role than it did. While all the usual trappings of a social game are here – sending gifts, doing one click jobs for your friends, etc – it would have been nice to engage in some ship-to-ship combat or conduct raids on their ships. Something mean-spirited and piratey would have been an absolute joy here. 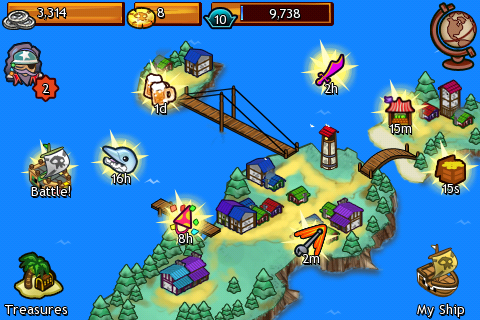 We would have also liked to see a social network, pre-existing or otherwise, serve as the backbone for the social play. Whether we’re talking GameCenter, Plus+, or something completely original that Capcom has hiding in its pocket, it would have been better than the “look for friends on Facebook and by e-mail address” option we were left with.

Still, with a good variety of gameplay, charming presentation, and a series of goals that always keep you working towards that next task (did we mention you’ll be completing simple missions all during the regular course of play?), it’s easy to overlook the minor annoyance that tracking down friends tends to be.

Freemium social games have become something of a mainstay on the iPhone as of late, but it’s been hard to pick more than a handful that are worth the time that most players are willing to sink into them. Lil’ Pirates easily joins that exclusive club of great social games on the go, and makes us curious about what social content might come from Capcom in the future. Could the house that Street Fighter built really be the next big name in social games? If Lil’ Pirates is any indication, all signs point to yes.