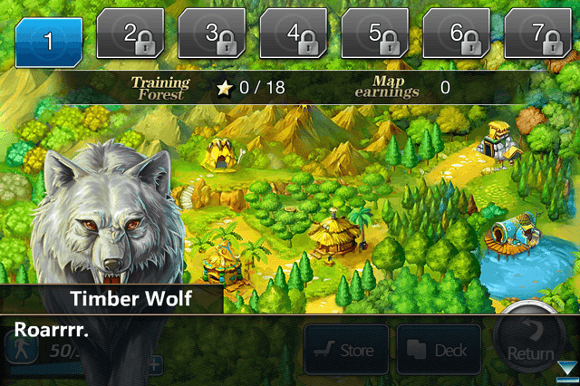 In this world, everybody gets carded.

Love ’em or hate ’em, iOS CCGs (Collectible Card Games) are here to stay. The genre might be getting a bit oversaturated at this point but the beautiful thing about it is that all games have to compete with each other and, as a result, have begun to splinter off and create their own sub-genres. Lies of Astaroth is one such divergence, and it’s made me a firm believer in the potential of card-based adventure games.

Lies of Astaroth shares a few commonalities with other iOS CCGs, such as cards (obviously) and the ability to level up powerful favorites with the duds, but the overall pace and feel is altogether different from the norm. Players must forge their way through a series of environments, each with their own collection of “levels,” as they attempt to gain strength and acquire a more powerful deck. A set amount of rechargeable energy is needed in order to explore a given area for coins/experience/cards, while combat with any number of random enemies pulls from the same pool. Once the energy is gone it’s either time to put the game down or pony up some special money (or outright buy special money) in order to refill it.

What really has me coming back to Lies of Astaroth—because I want to and not because I’m reviewing it—is the emphasis on individual cards during combat. Players can create a custom deck out of any of the cards they own (assuming they’re of a high enough level to cover their usage cost), and the overall deck limit only gets bigger as they level up. Each card has its own base stats for attack and health, as well as a number representing how many turns must pass for it to be playable, on top of some special skills that can be gained through attaining higher individual levels or even available from the start. Card draws are still random and only one card is drawn per turn so there’s still an element of randomness that I for one enjoy, so it’s important not to overlook any potential units’ values.

Once the combat begins and the cards are lined up they take turns trading blows. All the cards on one side attack—damaging other cards, healing, buffing, doing direct damage to the opposing character if there are no cards in front of them, and so on—then it shifts to the other side. Any cards that take too much damage are tossed into the graveyard for the rest of the fight and the line shifts over to the left as the process continues until one character loses all of their health or completely runs out of cards. It’s a system that I find oddly gratifying and really emphasizes the importance of maintaining and upgrading more valuable units. Plus some of them learn skills once they reach higher levels that are just insane. 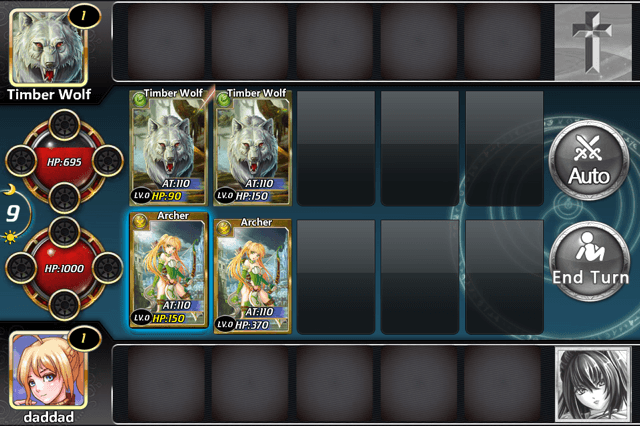 It’s a shame that Lies of Astaroth‘s progression is nowhere near as compelling. It’s a slow burn through and through, with players needing to fight their way through several levels in order to unlock new options such as card leveling or daily dungeon challenges. The story is also something of a mess, with only a small bit of exposition between a handful of characters that really just gets in the way of the fighting. I certainly appreciate and even applaud the effort of trying to give a freemium iOS card battle game a plot, but it’s just not very interesting or even sensible. And on a more technical level I wish the interface was a little more user-friendly. Why no home button on every single page? That means I have to back out across several menus just to reach the card enhancement button. It can also be a huge drag to run out of energy and have to wait quite a while (once every ten minutes) for it to build up again.

The interface is a little clunky, the two-dimensional characters are sappy, and it takes a little while to get to The Good Stuff, but none of that’s kept me from thoroughly enjoying Lies of Astaroth‘s spin on card battles. A couple of tweaks here and there would certainly be welcome but even as-is I could see myself sinking countless hours into creating a killer deck.