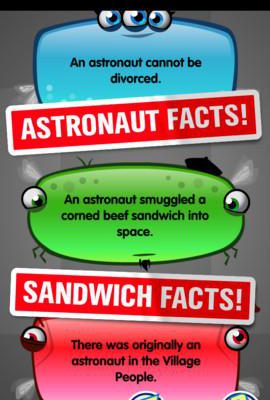 Lie or truth: In his diary, Abraham Lincoln admitted to farting during the Gettysburg Address.

Lie Swatter is a quirky new trivia game from the makers of the You Don’t Know Jack series, which tests how well you can spot a lie in a lineup of truths. And who better to give you these lies than a buzzing swarm of overweight and lopsided flies? But while the humor and variety of categories are there, a number of technical issues and design flaws ultimately leave the game caught in its own fly paper.

The object of Lie Swatter is simple: spot the lies printed on a number of grotesque and colorful flies. For each lie you swat, you gain 100 points; and for every truth you mistakenly swat, you lose 50 points. Hitting two consecutive lies will grant you a 100-point bonus, which is great if you have a real knack for spotting out ridiculous lies from just as ridiculous truths. The game adopts a turn-based, play at your own pace model akin to Draw Something, and each match lasts for three rounds before a winner is declared.

Before every round, players are given the option of choosing from one of three categories to test their lie detector skills in. The categories are all great fun, and they encompass everything from Dolphins and Japan, to Farts and Richard Nixon. But one of the best categories I stumbled across was called “Real Disney Cartoons,” which asked me to discern the truth from several ridiculous Disney cartoon plots like “The 7 Dwarves fight malaria” and “Goofy tries to quit smoking.” The great thing about Lie Swatter is that it doesn’t matter how book smart you are like in most trivia games; there’s no real skill or knowledge required to compete with your friends on a level playing field (those two Disney statements were both true by the way!).

The flies themselves in the game are really fun to look at, with bright colors and big bulging eyes. But just about everything else in Lie Swatter is bland and visually uninteresting. The menu interface has no flair to it, and you can basically see everything the game has to offer in less than five minutes or so. The game lets you log in through Facebook or your email, although I couldn’t get the email login to work for the life of me. Once I was finally able to start playing, I quickly realized the online community is pretty sparse, as I often had to wait upwards of 12 hours for one of my opponents to take the next turn across the handful of games I had going on at once. 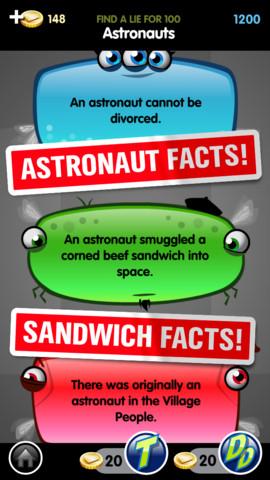 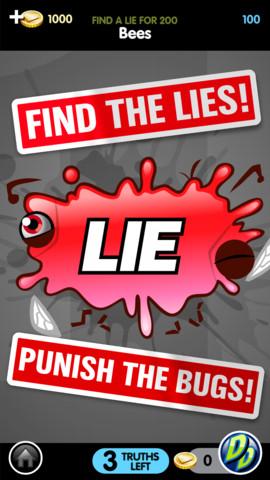 You can use coins to buy one of two items to hone in your lie-hunting skills and give you the upper hand in a match: one which tells you how many truths you have left on the board, and another which automatically doubles your points for your next move. Even though you’ll wind up using them at times, the items in the game are bland and under-realized, and it feels like they were just thrown in for the sake of having them. They can also be easily manipulated by someone who’s willing to pay for more coins through in-app purchases, and playing against an opponent who doubles his or her score every single turn makes that whole “level playing field” thing I was talking about turn pretty sour.

At its core, Lie Swatter is a really fun game, which is why it was so disappointing to see so many hang-ups and server errors lessen the overall experience. I ran into one of these errors on nearly every possible occasion in the game: starting it up, trying to log in, searching for a partner, waiting for the next round, you name it. For a strictly multiplayer experience, nothing about the game’s performance is ever fluid or smooth. Whenever I managed to bypass these errors, I was hit with a lengthy load screen at every turn, which made my time with the game feel clunky and abrupt. Lie Swatter is meant to be a fun and quick trivia game, but the poor servers and constant hold-ups make it a real chore to even get a single match going. 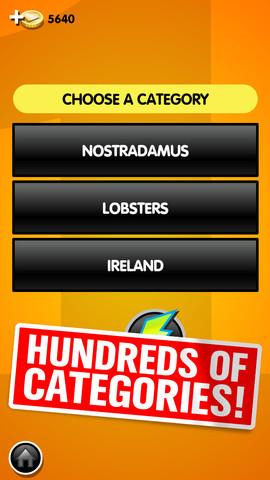 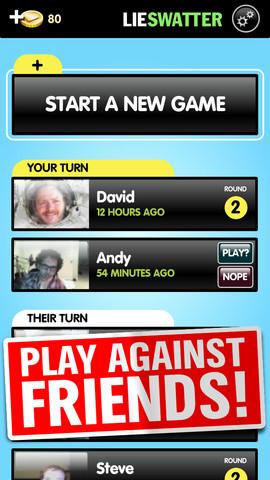 In the end, one too many design and developmental flaws bring down what could have otherwise been a really fun mobile trivia game. The basic premise of Lie Swatter will still bring a whole lot of laughs, and if you don’t mind a lot of waiting and trying to reconnect to the game’s unreliable servers, then you still might get some use out of that old lie-detecting flyswatter.