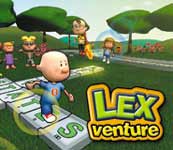 Remember when you had to do a science fair project? Most of us have done one… grudgingly (mine covered deforestation). Take a science fair without the painful parts, and add adorable Peanuts Charlie Brown and co. look-alike characters plus a huge helping of word puzzles to get Lex Venture: A Crossword Caper.

There are many time management games and hidden object games, but Lex Venture provides a delightful surprise as it doesn’t fall into either genre. This game not only brings something new to the casual game arena, but also does a superb job in every aspect: great story, adorable graphics and characters, creative power-ups, and even a Hangman style mini-game.

A gang of kids completes their science fair project, a word machine. They leave the project alone only to find a thief breaking their machine and getting away with parts. The kids follow the thief, who drops parts while trying to get away.

As the thief makes his or her way around town, the kids pass through yards, playgrounds, parks, the beach, and a corral. The kids use their brains to create words to get to the parts back, which is the goal of all stages except for five challenge matches.

Every stage contains a different scene and the kids take turns battling the thief and enemies (the first kid plays for 10 stages, the second for eight stages, and so on). Plus, each kid has a super power.

The game begins with a tutorial, but other than that, no help exists. The game could benefit from help instructions that also provide the names and description of the various children. Instead, we have to wait to learn their names in a story update or when we reach the stage when the kid enters the game. Despite this, the kids’ personalities shine

through as we step into their shoes.

During a typical level, nine scrambled letters appear on top of the grid. You must create words with three or more letters on the grid to move around and pick up parts. Unlike crosswords, you don’t have to make letters fit or work around existing words. After your turn, your enemies do their thing to slow you down.

While entering a word, a bubble pops up with the definition of the word. The word creator power-up creates a four-lettered word for you. These tend to be words we don’t use or haven’t even heard of, which is an entertaining way to learn new words. One kid’s superpower is creating five-lettered words instead of four whenever using the word creator tip.

Barriers such as puddles, rocks, people, and animals stand in the way of reaching the parts., and enemies come with different talents for stopping the gang: A duck eats everything in its way except for parts, a dog picks up the part and moves it, a rapper changes a letter to an uncommon letter.

Good items also show up on the grid. You can earn bonus points for collecting candy bars, muffins, and other treats. In addition to the word maker tip, balloons help the kids fly to a square on the grid and bombs blow up barriers and stun enemies. Sometimes the nine letters appear scrambled in such a way that it is hard to come up with a word. (You can use Shuffle to mix them up.)

Combos provide more support by renewing tiles, adding a joker, or electrifying the tiles. Renew replaces all the lousy tiles with new ones. Joker acts as a filler tile that can be any letter. Electrify electrocutes enemies so they can’t mess with the letters. Fun stuff, but even with tips, shuffle and combos the game isn’t easy at times depending on the available resources.

Two mini-games break up the uniformity. When the kids spot the thief, they play a game where they must grab more parts than the thief to win the stage. Before the next kid joins the game, the kid currently on call must play “The Challenge,” a Hangman meets Wheel of Fortune-style mini-game where the winner keeps a page of the machine plans.

In this particular game, a word appears with a couple of letters filled in and clues to the definition of the word. You pick a letter, and if it appears in the word, it shows up where it belongs. If the letter doesn’t appear in the word, then the “boss” (bad guy) throws an object on the chance counter. When the boss fills all six chances, the boss wins. However, you can use the tips to destroy an object or to receive a letter in the word.

Normal mode contains harder words and clues. Other than the mini-game, however, there doesn’t seem to be much difference between the levels of difficulty.

Although Lex Venture comes with plenty of challenges, the entire adventure mode only lasts 42 stages. Experienced gamers could probably finish it in less than a day, which cuts the fun too short. Quick game mode only comes with five quick games – with three of the five kids – that have more parts and challenges on the grid.

The game says you can download more levels online, but a quick jump to the publisher’s site shows that the extra levels aren’t available yet. Although the game is for the most part completely family-friendly, one word that was – ahem – sex-related did come out of left field. To quote Charlie Brown, “Good grief!”