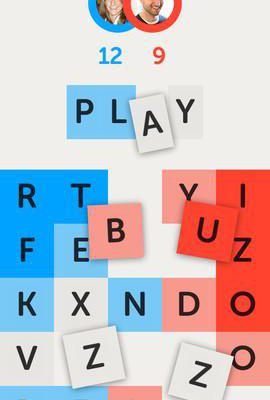 One of the biggest areas that people focus on when discussing the improvement and development of mobile games is graphics. The technological advances of the past few years have provided us with console-esque graphics on mobile devices. That’s amazing, and generally just a stunning sight to look at. But it has, similar to the development of console and computer games, spoiled us. We often turn to those as the shining examples when in actuality, the best displays of the system are in simplistic, creatively designed titles. Looking at Letterpress doesn’t reveal much, but it makes up for plenty when you start playing it.

Designed to look similar to a Boggle board, Letterpress is a game that takes little elements of a lot of familiar games and puts them together to create something new. Players will be challenged to find words on a playing field covered in letters. There is no requirement to make letters connect — just find what you can with the 25 letter tiles provided. Once you make your word, those letters belong to you, marked by your designated color. Your opponent will do the same, with the same goal in mind. This will go back and forth until every tile is possessed by a player. The player with the most tiles claimed at the end of the game wins.

To keep things interesting and to infuse a little more strategy into the game, players have the ability to steal tiles from opponents by using a claimed letter in a new word. Words can’t be duplicated, and the longest form of a word wipes out the base word, so putting together the fullest form of a word is encouraged. There is no way to prevent tile stealing, but it can be slowed by boxing a letter in. This makes it a firm possession of the player, but the opponent can free it up by stealing any tile adjacent to it. You can’t get too possessive of single tiles, though, because there is a full board to claim. 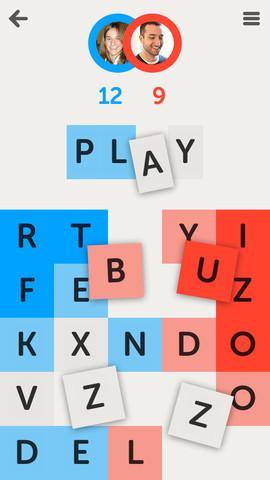 The back and forth and strategy elements of Letterpress, not just in crafting words but in crafting tiles and essentially claiming tile territory, are unbelievably addicting. It’s a game unlike Boggle or Scrabble, which limit your vocabulary to grouped or given letters, and allows players to run wild with the game board. If you can find a bunch of words within the same smattering of letters, you can lock down part of the game board and then pick off unclaimed tiles. You can make broad grabs and try to clear the table as quickly as possible, using sizable words as intimidation to your opponent. You can build off another offering, placing a suffix or prefix on a word to regain the already claimed tiles and a few extra. Letterpress is the perfect game for word nerds and strategy-oriented thinkers.

Every game you will play will be against an online opponent. Whether that is a friend or a stranger from the Game Center matchmaker is up to you, but there is no single player or pass-and-play option. That may be the game’s only downfall; Even the in-game purchase in this title is totally reasonable and worthwhile. You can play the game for free but will be stuck with the default theme–not a big deal at all–and won’t be able to see the already-used words. It’s a small benefit for a small price–only $0.99–and comes with the added ability to have more than two games running at any given time. 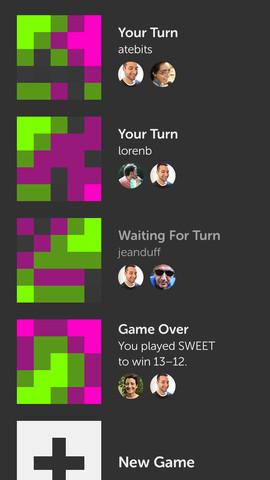 Graphically, Letterpress opts to keep things extremely simple. There is no fancy design; no excessively detailed layout. If it’s not needed, it’s not here. The game instead sticks to bright colors, big letters, and zero clutter, and it works extremely well. If there’s one fault to the system, it’s that you’ll have to clear games off your main screen when they are complete, and doing so wipes out any record of that game. There’s no way to keep track of your previous opponents or see your history, and these things could easily fit in the design without adding clutter. Regardless, the game looks great.

Overall, Letterpress manages to make a new and addicting game with elements of some familiar titles. Its extremely stripped-down look puts focus on the game, and there’s a whole lot to love there. Prepare yourself before diving into this title, because you’re probably not going to put it down after picking it up.