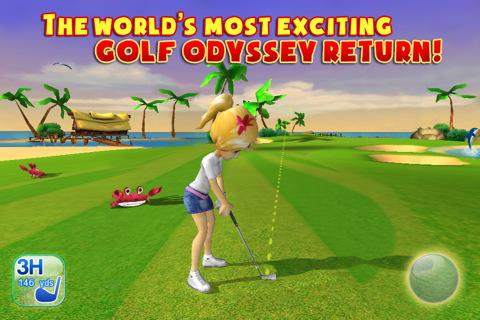 Let’s Golf! 3 is a great game of golf, but it’s freemium implementation should take a mulligan

Gameloft’s Let’s Golf! series is close to the hearts of many a pocket golfer. With a mix of cartoony characters and serious simulation, it’s not much of a stretch to call it the Hot Shots Golf of the iPhone. In fact, we like the series so much that Let’s Golf! 2 came close to receiving a perfect score from us when it was released last summer. Now a year has passed, and not much has changed – except the business model.

Let’s Golf! 3 is a freemium offering, allowing the game itself to be downloaded for free, but incentivizing players to pay for much of the content. The freemium business model works tremendously well for other games, and it could have worked just as well here had they used it to exclusively unlock new courses, clubs, and equipment – but instead Gameloft opted for something more akin to the Zynga model, meaning players are stuck spending “energy” with every hole they shoot.

Since players are limited to 5 energy (unless you choose to purchase more), you’ll never be able to play more than five holes of golf in a single sitting. This might not be a problem for the typical mobile gamer that’s only looking to spend 5 or 10 minutes per play, but for video game golf enthusiasts, not being able to play a complete course in one session can really take the wind out of your sails.

Energy refills at one segment per hour, though if you’re impatient you can always buy more – and that’s where the freemium model comes into play. This style of freemium might work for Facebook farmers and city-builders, but for a more classic console-like experience, the “pay or wait” formula just doesn’t cut the mustard.

Still – that’s not to say that all of the freemium-style changes in Let’s Golf! 3 were so poorly received on our part. Players can now purchase clothes and equipment that will modify their stats, adding a light RPG element to the game. This can be done with currency earned in-game, as well as with in-app purchases. You can also spend money to unlock courses early that you’d otherwise be able to do through the course of play.

And at the end of the day, there’s one fact we simply can’t avoid: Let’s Golf 3 is still a really great game of golf.

Everything we loved about Let’s Golf! 2 is back with a vengeance. Great touch controls allow players to precisely line up their shots, adjust their footing, and try their best to get the power and accuracy they’re looking for. Multiplayer is quick and responsive, and now allows for up to four players to golf simultaneously. Courses are varied, well designed, and charmingly themed. At its core, this is a really good game of golf.

The shots themselves follow a formula that video game golfers have grown accustomed to over the years – a swing meter in which you’ll tap for power and accuracy. It may be a well worn mechanic that came from the world of PC and console golf games, but it still feels like something designed from the ground up for the iPhone thanks to how intuitive it feels on a touch screen.

And those new RPG elements? They go beyond the freemium play. You’ll earn experience with each hole, and when you level up, you’ll be able to spend skill points on things like power, accuracy, and putting. As someone with a terrible knack for missing putts, you’d better believe I like being able to buy my way towards improvement. 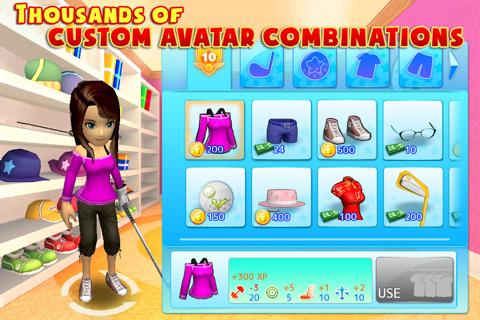 There are some other nice tweaks too. The graphics, for example, feel a little crisper and better detailed than in the last game. None of the background elements, like trees and rocks, feel like cardboard cutouts this time. During club selection, you’ll get an indicator of just how far that club can hit. All in all, there have been a number of small but satisfactory refinements that have improved on series formula.

It should also be mentioned that, at least at launch, the game suffers from the occasional framerate stutter. Normally this wouldn’t even warrant a mention, but when it happens just as you’re about to tap for your shot, it can be utterly devastating – especially since replaying that hole for a better score is going to cost you another energy.

Whether or not you’ll like Let’s Golf! 3 really comes down to how comfortable you are with their freemium approach. Had it simply been relegated to the periphery – allowing players to purchase new courses and equipment – Let’s Golf! 3 would have been a shining example of freemium done right. But by limiting the actual amount of time you can play without spending money, Let’s Golf! 3 goes from a fantastic golf game to an exercise in frustration. If you don’t mind spending money, or simply playing in small bites, Let’s Golf! 3 will make an excellent addition to your collection. For everyone else though? The game’s brilliant design doesn’t excuse its misguided freemium implementation.