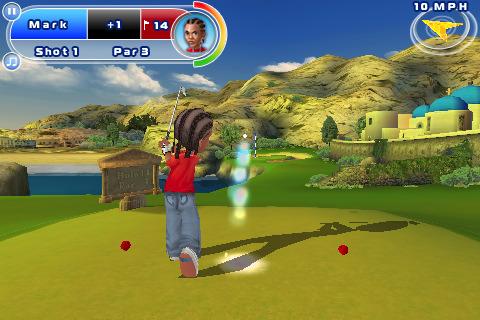 While it might not have the rabid fan base of baseball or football, golf has quietly become one of the largest sports in America. Not a weekend goes by where a huge percentage of the adult population doesn’t grab their golf bags and hit the links. But every now and then there’s a rainy weekend… or a boring office meeting… or a bus ride to Newark. During those times it’s nice to have a little golf game in your pocket. If you have an iPhone, you’ll want that game to be Let’s Golf! 2.

Players in Let’s Golf! 2 will take their putter and wedge on a trip around the world, visiting six different courses in six different countries. The courses are all themed in a way that relates to their host nation, though never in a way that feels silly to the point of mini-golf. Playing in Mexico, for example, will provide Aztec ruins as the backdrop for your golfing adventure. Visit Kenya and you’ll be doing the same on a safari. The courses themselves never get silly, but their presentation remains fun throughout. Swap out giant animal bones for trees, and you’ve got next year’s Tiger Woods release.

The basic gameplay mechanics here will be familiar to any seasoned video game golfer. After lining up your shot by touching the left and right side of the screen, you’ll be presented with a swing meter to set the power of your shot. The meter gives an indication of the best power level to use, but you’re welcome to do as you see fit. As the meter swings upward you’ll tap once to select the power level, and as it swings downward you’ll tap again to determine accuracy. After that, the ball is in motion. You’ll be able to put a spin on the ball while it’s in the air – a strange, albeit welcome twist to a formula that usually has players put spin on the ball pre-swing.

Putting is also a relatively familiar affair. A grid will show you the grate of the putting green, and you’ll line up your shot and tap to set the putting power. The basic mechanics in Let’s Golf! 2 are more or less commonplace in golfing games, but that doesn’t make them any less enjoyable.

The only minor nuisance we encountered was selecting clubs. It’s done via a wheel in the corner of the screen, but to activate it you need to touch the center, slide your finger to the outside, and then spin it to select your club. It sound easy enough, but half the time it would conk out on us before we had a club selected. Since the game normally picks the best club for any given situation anyway, it’s not a huge deal. But for those times when you want to play like the pros, going into your bag for a club can provide an unexpected annoyance.

Where Let’s Golf! 2 really shines is in its wide variety of modes and objectives. The career mode, which is where most players will spend our time, offers up a great assortment of tasks that vary based on the amount of time you’re able can invest. If you only have a few minutes on your lunch break, you can tackle 3 random holes to check that task off the list. Have some more time on your hands? Get involved in a 9 hole shootout. 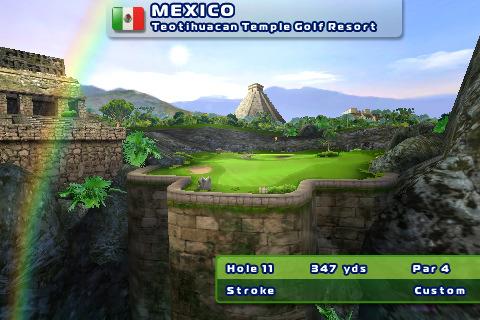 The game is divided into 6 courses, each offering 10 objectives. The objectives will award you medals, which in turn open up more courses and objectives (and characters, and gear, and everything else you can imagine). As you complete each task you’ll earn experience for your character, which in turn will boost their skills and earn them special powers that can give you the occasional boost.

Players can easily lose hours to career mode, but for those looking for a quick minute of two of play, there’s no better place than challenge mode. In challenge mode, skilled players can test their mettle in skills competitions like “longest putt,” or “birdie or bust.” And yes, there’s incentive here too. Completing these challenges will unlock even more content for you character to enjoy.

On top of all that, Let’s Golf! 2 features a fairly competent multiplayer mode. While the game supports both wifi and Bluetooth multiplayer, the real crowning achievement here is the online. It takes only moments to create a match, and finding an opponent is never a problem (although that will inevitably change – player retention is a problem for most multiplayer games nowadays). The only hiccup we encountered is that, in some instances, players were permitted to go twice in a row. I get the feeling that these double plays are somehow involved covering up lag, but given the turn-based nature of the game I can’t imagine lag being an issue. 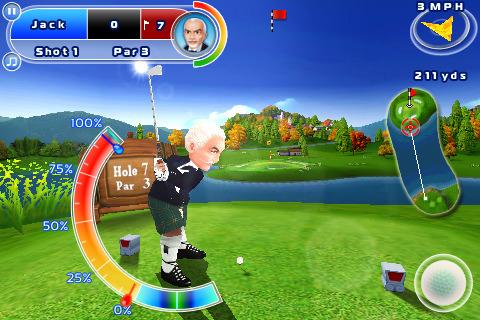 The presentation takes the same slightly cartoony approach that we’ve seen in popular golfing franchises on other consoles like Hot Shots Golf or Pangya. But don’t let the somewhat silly nature of Let’s Golf! 2 fool you into thinking this is a child’s game. The visuals here manage to impress at nearly every turn, offering graphics on par with the PlayStation 2 or Nintendo Wii. Let’s Golf! 2 is easily the best looking golf game on the iPhone so far.

Let’s Golf! 2 offers a solid golf game at its core, and wraps that core in some mildly cartoony fun. With multiple players to unlock, 108 holes to play, and a variety of challenges and objectives to accomplish, this is an offering that easily lives up to its price tag. If you’ve been looking for a fresh golf game to putter around with, Let’s Golf! 2 is a great way to conquer the back nine.