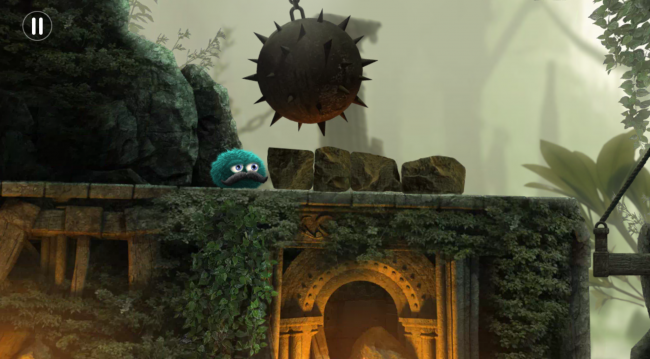 Plays as Good as It Looks

Leo’s Fortune is gorgeous. That’s what most of the feedback on the App Store focuses on. It’s true, too.

The titular Leopold swoops, slides and floats between these artificial artifices. Your left thumb determines right or left momentum, while the right inflates or dives our fuzzy, mustachioed protagonist.

Beyond that it exists, the world of Leo’s Fortune isn’t explored very much. It’s taken for granted that this fungal-infested cheese curd is the standard for sentience in his own lands. Not over-explaining the unnecessary lets the sometimes verdant, always colorful environment feel lighthearted and playful without getting twee. It would have been easy for Leo to be the dust bunny that lives under your bed or some-such nonsense, but instead the developers are comfortable in their own, weird world.

Perhaps that’s what freed up resources for the outstanding sound design to match the aesthetic. The music is predictably twinkly fairy tale fare, but Leopold’s molasses of Eastern European accented voice acting is, if not better than we deserve, better than it probably need to be in a cute little game like this. 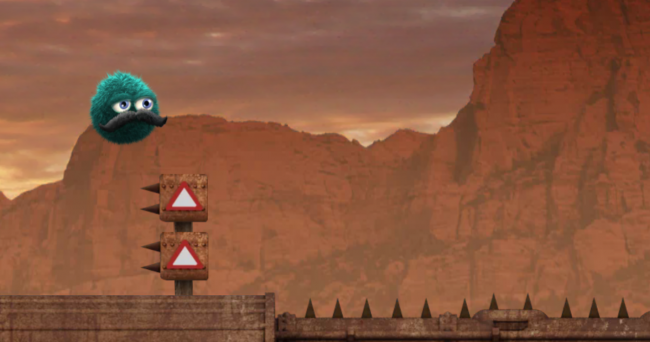 He’s the narrator of his own story, which involves the brief search for his hoard of gold, burgled by some unknown entity. He suspects his family, which conveniently live in variously themed environments for Leo to explore. That sets the stage for a new set of stages every four or five levels: from verdant valleys to nautical ports and Egyptian ruins. The brightly lit former remains my favorite; the latter areas never really capture the same contrast, and seem a little obligatory with their themes, to be honest.

“Obligatory” also describes the experience mechanically. There are spiked platforms to avoid, crates to push on pressure plates, and switches to flip with your inflatable girth.

Just because it’s all stuff we’ve seen before doesn’t mean it’s bad, however. The puzzle/platforming rhythm is a strong one. Each beat is spaced evenly, with just enough upward tempo to feel gently challenging. The only real concern is when the jumping gets a bit tinny – requiring the kind of precision that touch controls aren’t famous for.

Compensation comes from — literally — floaty controls, which allow you to slow your falls and nudge against the pull of gravity. 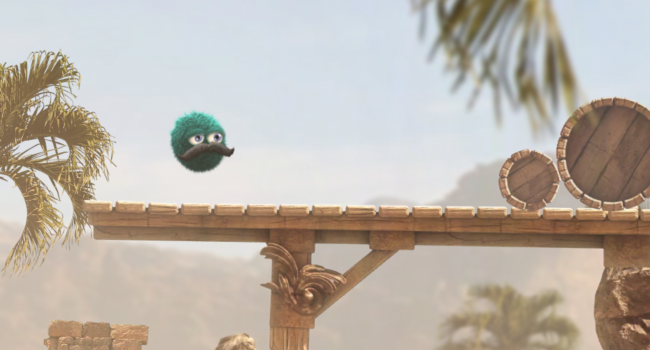 It reminds me not just a little bit of Limbo: specifically the mobile version. That game, too, had a great deal of pedestrian puzzles, intentional drift, and physics-y brainteasers and a distinct style. It was also designed to be played with buttons, benefiting from binary on-off controls and tactile feedback. Leo’s Fortune presumably wasn’t built for a gamepad, but I can’t help but wonder if it should have been.

Also similar to Limbo is the game’s brevity. It won’t take you more than an hour — maybe two — to unbury the fate of Leo’s savings. If you’re not the sort to repeat levels, earning stars by collecting every gold coin (easy), doing it under par time (not so easy) and/or not dying once (good luck with that) you’ll absolutely blaze through it, and likely desire more than the grip of bonus levels.

Wanting more of a game certainly isn’t a knock – especially when what’s there can be had for five dollars, no microtransactions required (or even presented). And hey, if you’re just in need of a looker, this is a nice alternative to the oversaturation of pixel art you can find just about anywhere else.

There’s more to Leo’s Fortune than just those good looks everyone’s quick to point out, though they’re definitely the primary draw. Whether for the gameplay or the gorgeousness, this one definitely gets a recommendation.