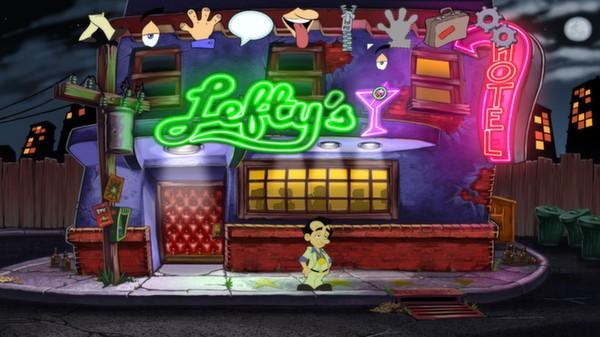 There’s no denying that gameplay that revolves around staring blankly at a room dense with interactive people and objects, and putting the square peg in all the circular holes (pun intended) until something sticks is hopelessly dated. A more rewarding problem to ponder though is how the humor of a game like 1987’s Leisure Suit Larry cannot be extricated from its gameplay counterpart and adapted into some other genre or medium. Banking on nostalgia and some twists thrown in for good measure, developer N-Fusion Interactive has re-remade the game from the ground up, seemingly certain that this classic speaks for itself. You apparently agree, since this game was funded on Kickstarter.

If you’ve never played an old school point-and-click adventure before, Leisure Suit Larry in the Land of the Lounge Lizards: Reloaded will treat you to a tutorial by series creator Al Lowe himself. If you have played the genre before, you can still have the treat. Reloaded gives you a persistent set of ways to interact with the world, only changed up by unique inventory items. These modes of interaction include everything from touching to licking, and yes, you can unzip your pants at a moment’s notice. You can access your… abilities by cycling through them, using a drop down menu at the top of the screen, or a ring menu you can call up at any time, catering to whatever your preference may be. Whether or not you can figure out what to do with your abilities and assortment of items gathered from gutters and bathrooms is another matter entirely.

Reloaded looks amazing, with every nook and cranny dripping with grungy detail. Idle animations abound, facial expressions are priceless, and every surface, floor, and ceiling is caked with intentional choices and jokes. The bathroom graffiti is probably too small to even read on your monitor, but rest assured there’s something funny written there. A newly-added narrator is your constant companion, talking to the player more often than Larry himself, commenting on the game’s jokes and the player’s intelligence, and just generally breaking the fourth wall. Try to interact with the wall or floor of the bar and he’ll comment that you’ve lifted the entire establishment but now have nowhere to put it.

Hilarious or horrifying depending on who you ask is the fact that the humor in Reloaded doesn’t feel even remotely dated. Larry would be right at home in the right sitcom or a Seth MacFarlane joint, even though the character himself is mostly just a set of senses and appendages through which the player disturbs this familiar universe. It’s not going to make you fall out of your chair, but Reloaded is genuinely funny, and like the better episodes of Family Guy, can shift brows from the gutter to the stars instantly. Thickly-veiled faux misogynistic jabs at Dan Savage starkly contrast chuckling at the word “hard.” 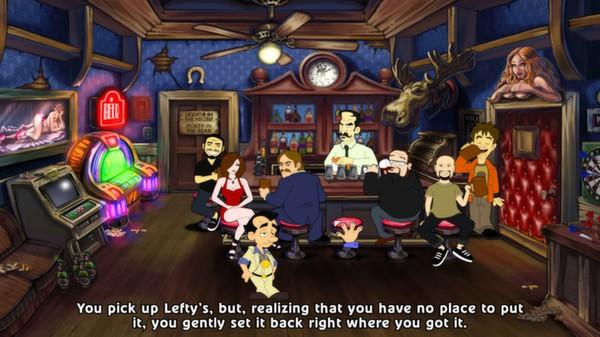 Leisure Suit Larry in the Land of the Lounge Lizards: Reloaded is one serious clean up job. The city of Lost Wages has never looked, sounded, or played so good, and the additions are mostly huge improvements. You may want to throw the mouse when you accidentally trigger an unskippable lengthy chunk of dialogue for the fourth time, but this is about as playable as point-and-click gets, short of genre evolution. It’s definitely a game for the fans and by the fans, literally, and at $20 those fans better be devoted. Regardless of whether this game might feel like history class to new players, if you grew up on Larry, then this is your love letter covered in stains you’d rather not try to identify.