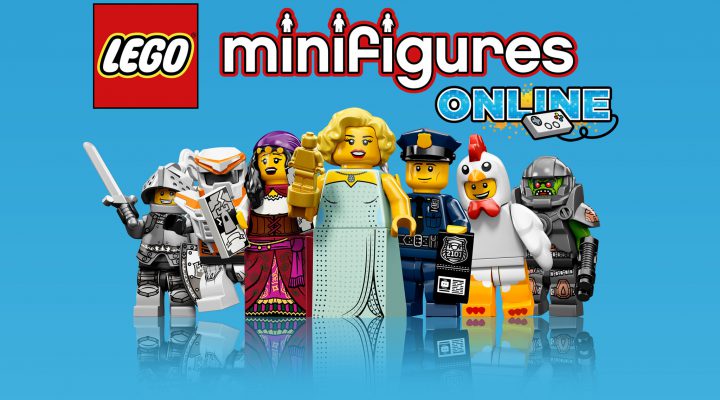 Fun MMO suitable for all ages ... with LEGOs!

Requires a fee just to start playing, which some may find off-putting.

Challenge and depth likely not there for hardcore gamers.

Before I throw myself into this review, it’s appropriate to pour out a little … whatever it is that LEGO minifgures drink, in remembrance of LEGO Universe, an honest to goodness MMO that lasted for 14 months at the beginning of this decade. My kids were too young to play it at the time but loved watching me play and were both sad when it closed up shop in early 2012.

That story is relevant because while LEGO Minifigures Online isn’t supposed to be a replacement for LEGO Universe, it’s hard not to think of it as one of those spiritual successors everyone is always going on about. The difference is that this game, which is playable on PC as well as iOS and Android devices, trades some ambition for accessibility — particularly for younger gamers — while also hopefully finding a business model that allows it to survive. 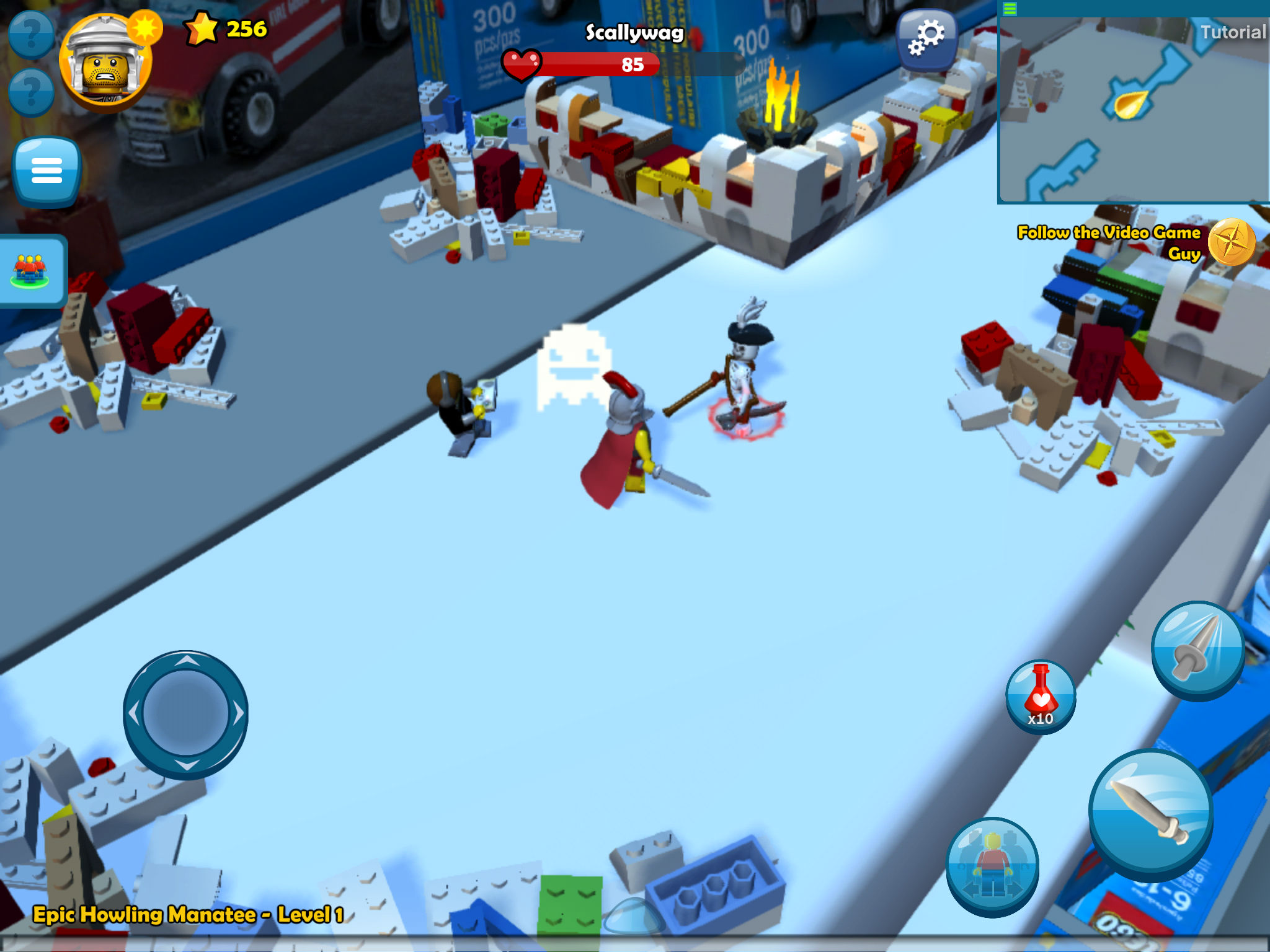 But we’ll come back to that part later. LEGO Minifigures Online allows new players to jump right into the action, choosing from one of three different minifigures (Bumblebee Girl, Roman Commander and Plumber) and a kid-safe name that consists of three words from pre-approved lists. If you ever wanted to play a game where you can be Epic Howling Manatee, this is your chance.

As the opening narration explains, the world of the minifigures is being threatened, but you can rise to become its greatest hero … eventually. There’s surprisingly little explanation of the basics, which might flummox youngsters who haven’t done a lot of gaming, but the basics should be simple for most folks to comprehend. The default controls are great for touchscreens, as you can tap or use a virtual stick to move and tap or use corner buttons to attack, build things and perform other actions. 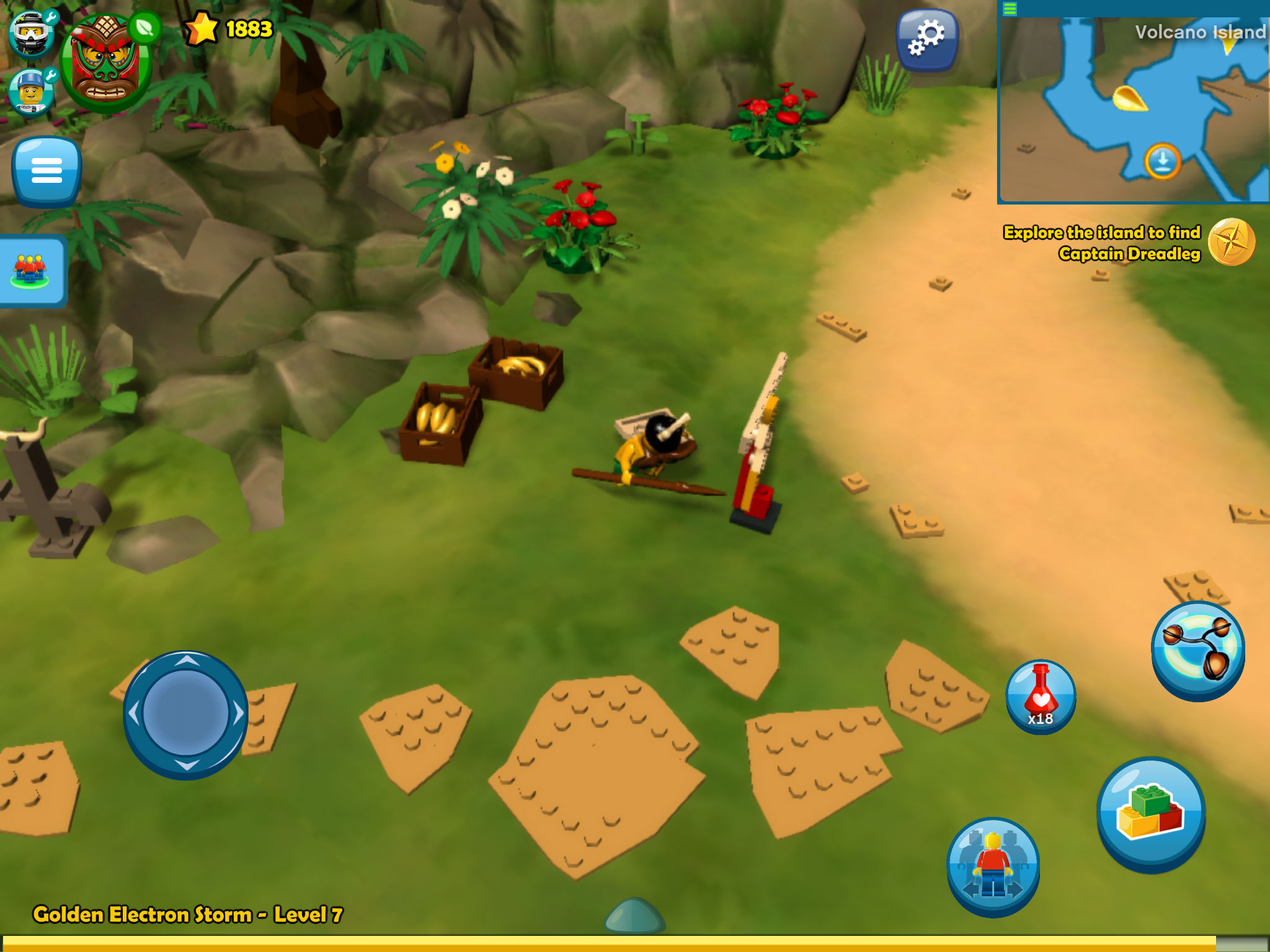 The visual language should be familiar to anyone who’s ever tried any LEGO console games, which is probably close to the subset of people called “Everyone.” Bricks hop up and down when they can be used to build something, though they don’t do so as often as in other LEGO titles. You can smash some objects for stars, which are used to level up the special abilities of your minifigures, yet you might find yourself attempting to smash things that are not destructible. Funcom put a lot of work into the backgrounds and scenery of this particular brick-based world, but many of the items that inhabit it are simply window dressing.

As a side note, I’ve seen more than one person complain while reviewing this game in the App Store that they wish the characters could jump, but the simplicity here is probably best for kids. Combat is pretty simple against mobs, even when they come in groups, as long as you figure out how best to use your specials. The bosses can be a little trickier, which is nice, and the devs used the LEGO setting to ensure you encounter a wide range of foes even in the first world, which is pirate-themed. 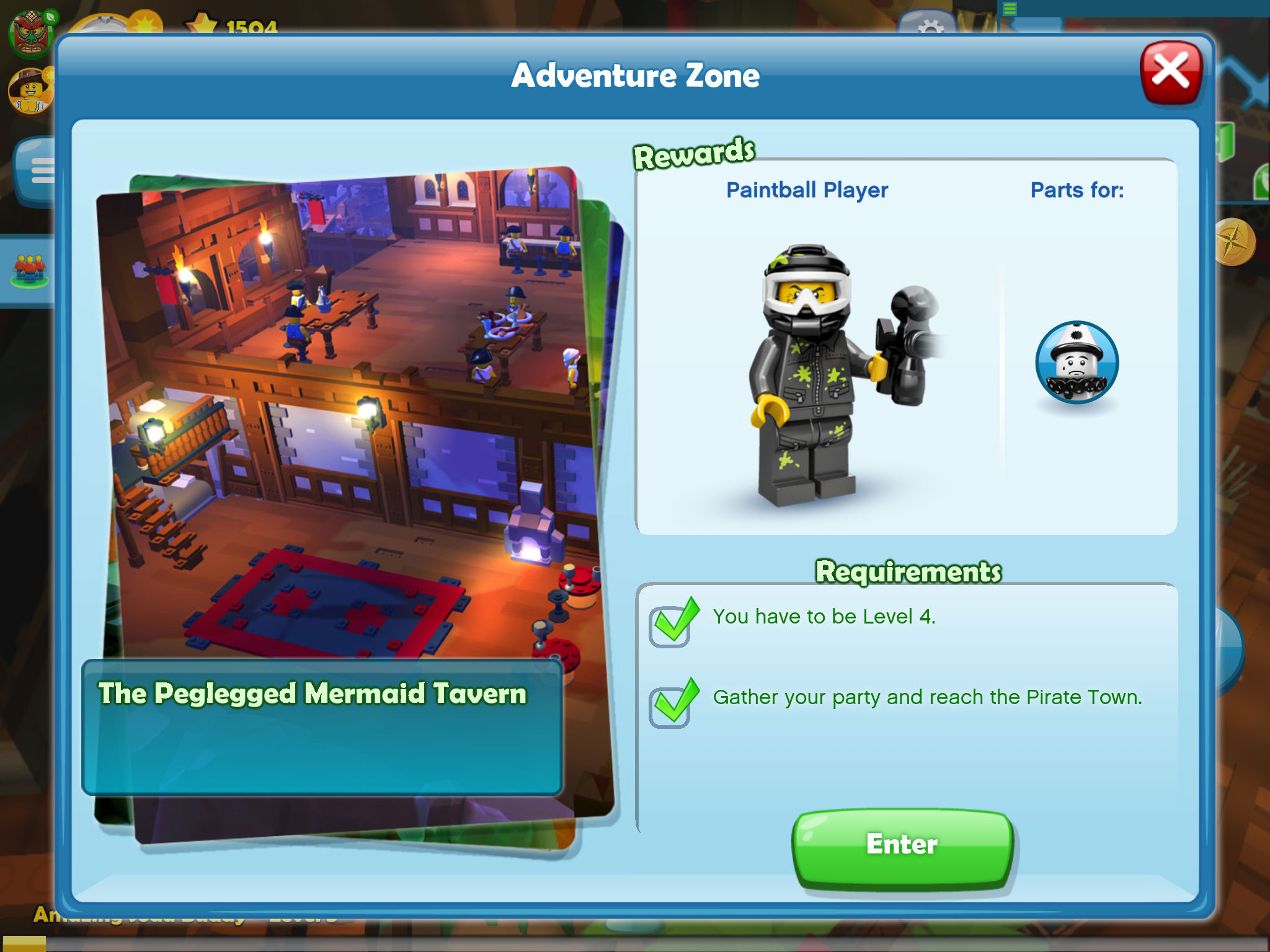 If you’re versed in MMOs, you’ll appreciate the way that the open world is where you’ll encounter other players but some mission areas are instanced. Quests are pretty simple but do show some variety, so you might have to open a certain number of chests in a limited time or run through part of the area without getting hit by cannons. The controls aren’t always super precise, but the gameplay has been designed in such a way that it really doesn’t matter.

There’s plenty of trademark LEGO humor as well, most of which comes through during the cutscenes and the ensuing dialogue. Something about a quipping minifigure just puts smiles on people’s faces, as the 31 million people who went to see The LEGO Movie in theaters last year would no doubt agree. It’s also adult enough (meaning maturity-wise, not inappropriate) that parents who end up playing along with their kids should enjoy it. The musical soundtrack is also quite pleasant if a bit repetitive after a while. 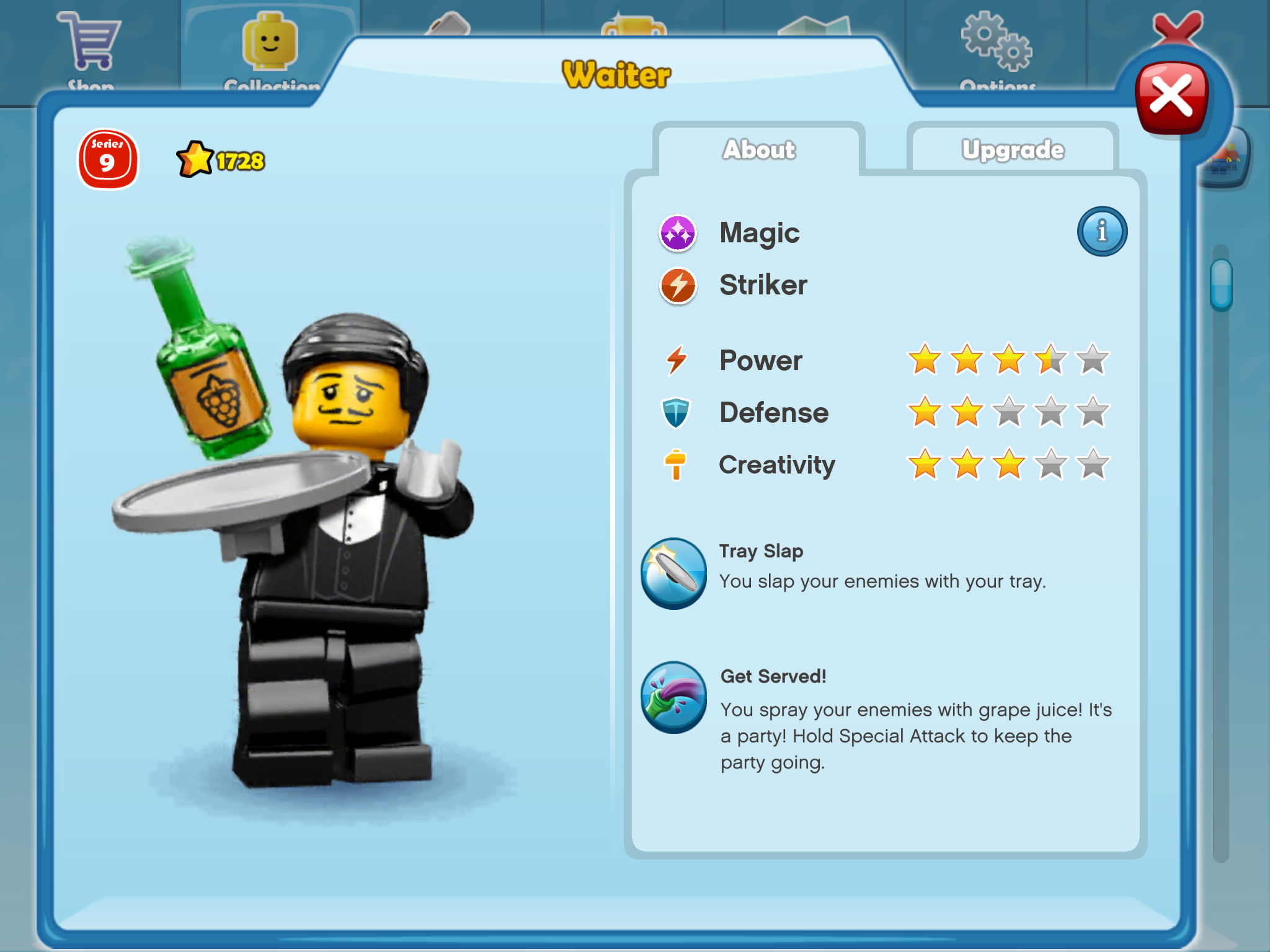 It probably goes without saying that you can collect a whole bunch of different minifigures while playing, all of whom fall into the Striker (good at dealing damage), Defender (harder to defeat) and Builder (faster at building things) classes. You’ll be able to earn more by completing certain quests and still others by gathering the proper pieces to put them together, so it’s not difficult to assemble a good mix.

If all of this sound pretty good, there’s really only one thing to consider: are you willing to pay for it? LEGO Minifigures Online isn’t free to start playing, which is uncommon for both mobile games and MMOs these days, so any title that is both and asks people to plunk down money up front is trying something fairly unconventional. It’s difficult to make a judgment call on the value proposition of an online game like this in just a few days of review time, but it certainly feels like it’s there.

Of course I would have said that about LEGO Universe too, and we know what happened there. You might want to bump my rating down a bit if you’re a hardcore gamer looking for something a little more challenging or substantial, but the target audience for LEGO Minifigures Online should find plenty to like. Long may it build.

Tales from Deep Space Review: Have Robot Will Travel