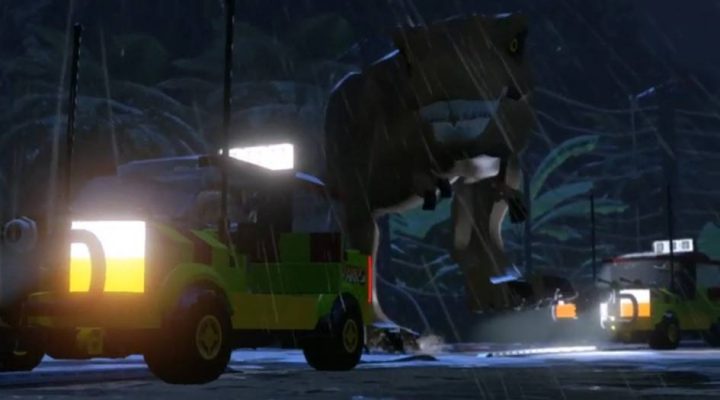 The combination of LEGO and Jurassic Park works surprisingly well

My relationship with the LEGO series of games has been rather uneven over the years. Every now and then a LEGOfied version of a thing I was interested would come out, but it was always a roll of the dice whether or not it would keep my interest (with LEGO Star Wars being a particular high point).

Then along came LEGO Jurassic World.

In it’s original console release, this was the first LEGO game that ever compelled me to play each level to death and unlock everything. I blame the combination of dinosaurs, the gorgeous visuals, and the surprisingly clever integration of LEGO game-style puzzles into the Jurassic Park worlds. Unfortunately, the mobile version of LEGO Jurassic World isn’t quite the same as what we got on consoles. 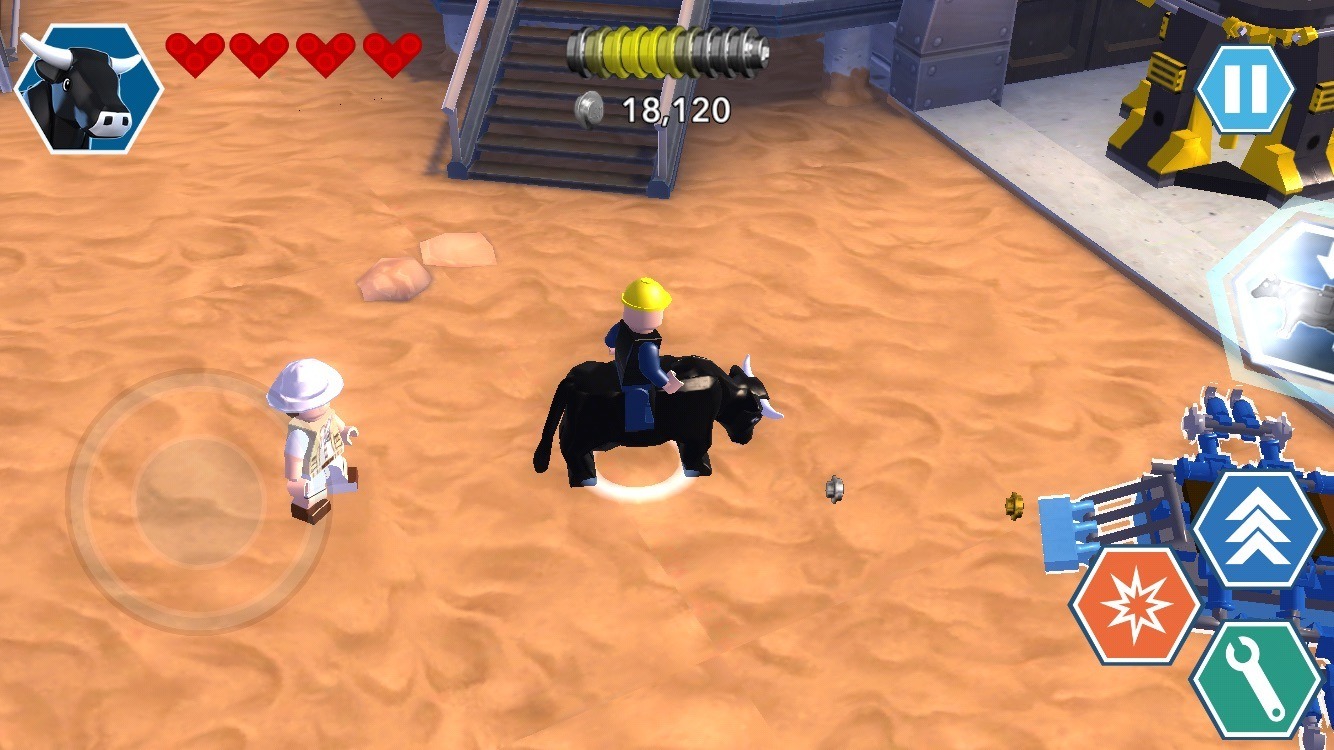 If you’ve ever played a LEGO game of any kind before, you’ll have an idea of what to expect with LEGO Jurassic World. Each level is played with two or more interchangeable characters, each with a different set of skills or gear that will allow you to complete various tasks and puzzles. A lot of said puzzles usually require breaking apart objects in the environment in order to use the bricks they leave behind to construct something you need to progress — though sometimes simply finding what you need is its own kind of puzzle. And, of course, you’ll want to keep a lookout for collectibles and gather up as many studs as you can, because how else are you going to unlock all the special stuff?

Replaying levels is also necessary as you won’t always have the right abilities or tools that you’ll need to find everything the first time around. Instead, you’ll want to come back after you’ve unlocked more characters and make use of their skills. Skills that, I have to admit, are often pretty cleverly implemented. It’s a concept that’s common to all LEGO games, but I feel like the skills fit better with these characters and theme than we’ve seen in previous LEGO releases. Stuff like Malcolm’s flare or Tim’s nightvision goggles that allow them to access dark caves, Lex’s ability to scream loud enough to break glass, or Muldoon’s knack for tracking. 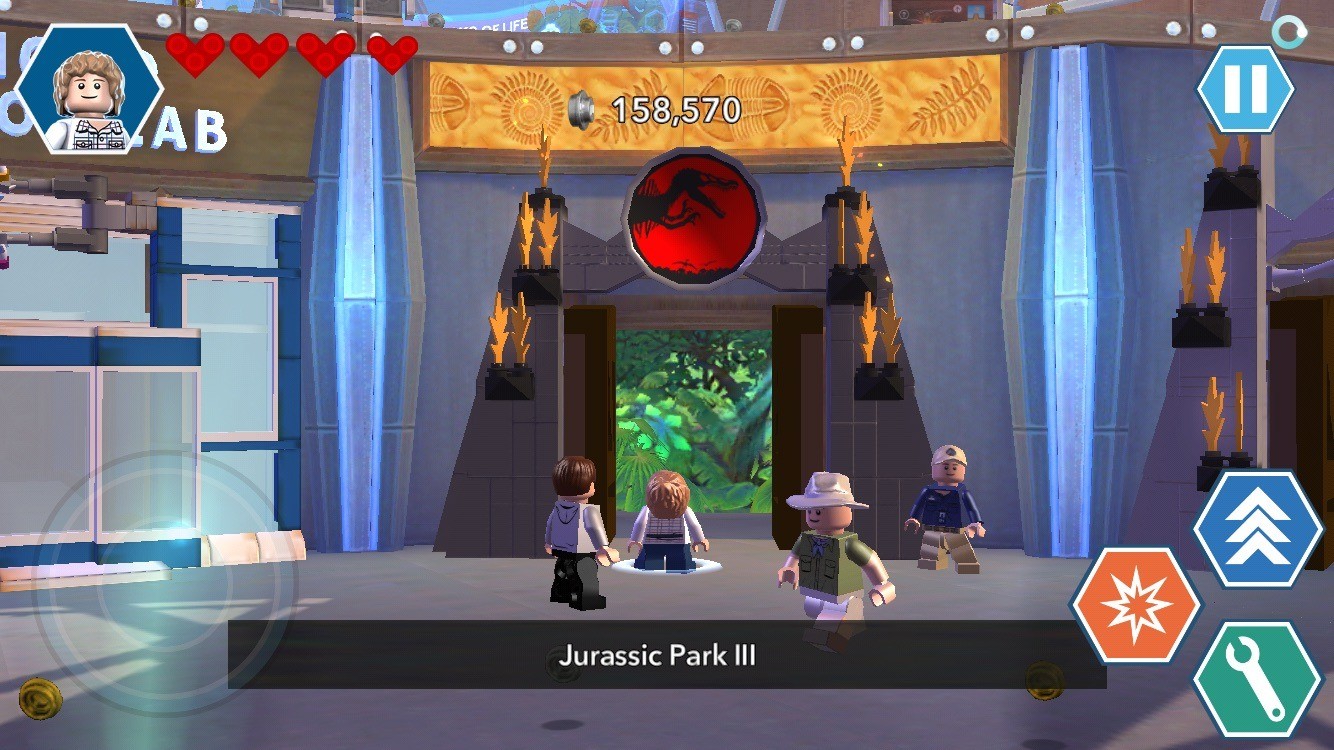 Everything controls well, too. At least with the virtual stick control option. It feels odd to have the jump button towards the top and the interact button towards the bottom (I keep pressing the wrong one for the wrong thing), but overall it works. The “casual” controls don’t quite meet expectations, though. I appreciate the one-touch option, but the convenience results in a distinct lack of more nuanced control that bugs the crap out of me. It’s so much easier to punch rocks and trees when you can just walk over to something and tap a button.

To its credit, this port of LEGO Jurassic World does touch on most of the important stuff. For example, the T-Rex encounter is more or less faithfully reproduced, though it’s missing the impressive lighting and rain effects found in earlier versions. Most of the cutscenes are also intact, but notice I said “most.” This is my biggest problem with the game, actually: a pretty noticeable amount of content has been cut. Chunks of cutscene exposition are gone (such as feeding the Raptors in the first movie), entire levels are absent (like the garage from the second movie), and most levels are noticeably smaller than before. 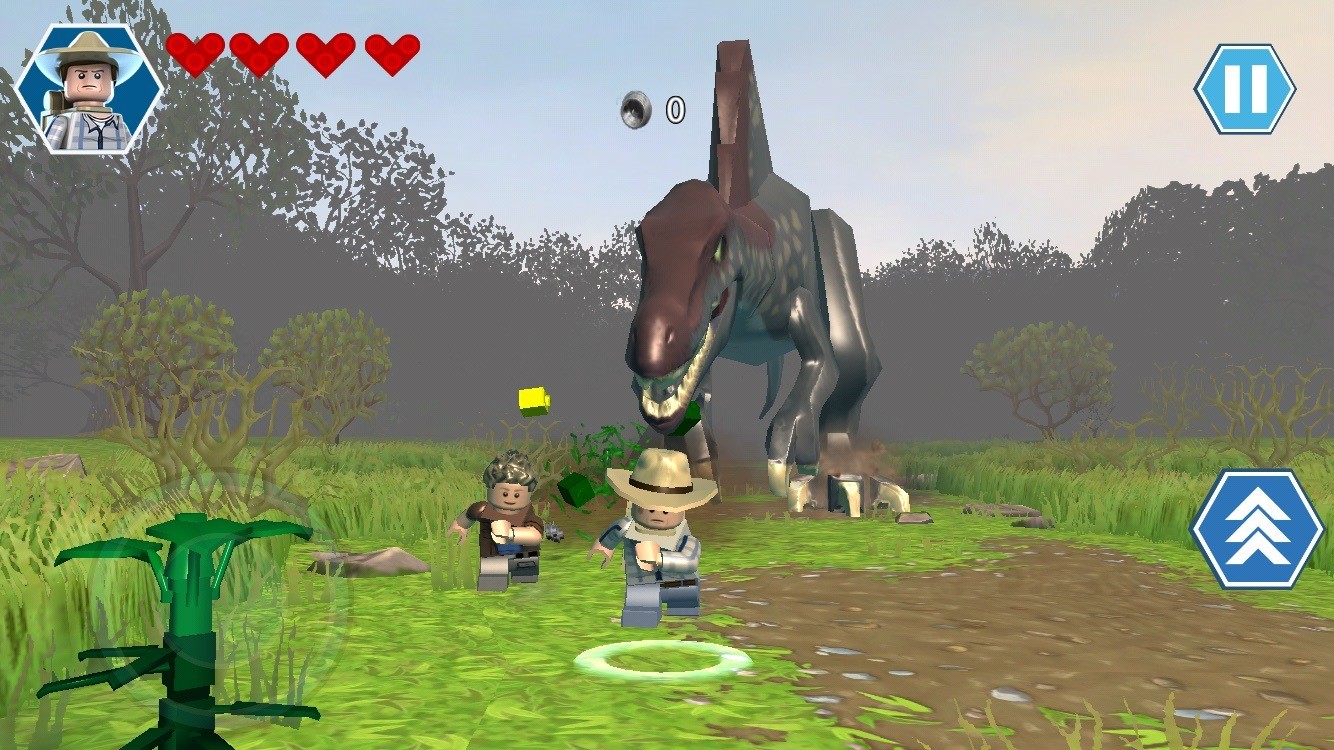 On top of the disappointment of missing out on certain things, I’m also not a fan of the new hub system. The original game had large open-world areas that represented each film, and you could fast-travel to make level selection easier. Here they’re broken up into significantly smaller chunks and levels are only available in groups of three – so if you’re on level 5 and want to go back to level 2, you need to walk back to the first area of a given film’s hub and activate the computer there. It’s awkward, and I can’t help but miss being able to explore the much larger environments. I’ll admit the central hub does make jumping between films much faster and easier, though.

LEGO Jurassic World on mobile is a bit disappointing, but that’s because I’m so fond of the original release and can spot what’s missing. Honestly, it’s no wonder some content was cut when you consider how much less digital storage space the average mobile device has when compared to a console or PC. Still, as with the earlier releases it shows plenty of reverence for the movies, and is easily the best mobile LEGO game I’ve played to date. I think those who’ve yet to play any version before will definitely find a lot to like (or even love) here.