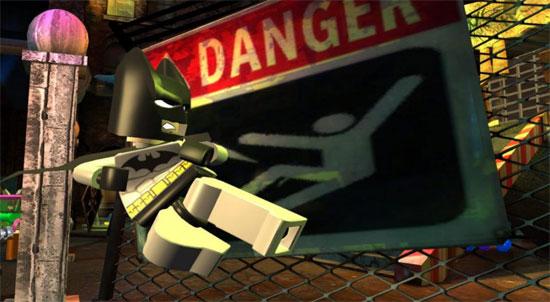 See Batman like you’ve never seen him before – in LEGO!

LEGO Batman, like LEGO Indiana Jones and LEGO Star Wars before it, takes a beloved franchise and recreates it with scenery built out of Lego bricks (much of it destructible) and populated with stumpy Lego-people versions of Gotham City’s most famous denizens.

If you’ve never played one of the LEGO games before, a quick overview is in order. Picture a 3-D action game involving plenty of running, jumping, and defeating enemies – but all of the characters in the game and most of the scenery, too, is all made out of LEGO. You’ll frequently see piles of LEGO bricks lying around that you have to build into something useful – a vehicle to ride, a bridge to let you cross a big chasm, a staircase to take you up to the second floor of a building, and so on. (Don’t worry if you aren’t good at building things; there’s no actual construction aspect to the game – everything builds itself automatically as you watch.)

Comic book fans will appreciate the inclusion of some less mainstream playable characters like Man-Bat, the Mad Hatter and Killer Croc in addition to better-known ones like Two-Face, Catwoman, the Scarecrow, Poison Ivy, Nightwing, Batgirl and of course the big three: the Joker, the Penguin and the Riddler.

Much of the humour, including Robin’s portrayal as the bumbling comic relief sidekick, seems to have been inspired by the campy TV show, and underscoring it all is Danny Elfman’s dramatic soundtrack from Tim Burton’s Batman film.

In each mission you’ll control the primary character (Batman, and later the Riddler, the Joker and the Penguin) while a second one tags along as a sidekick (Robin, and later assorted criminals). Gameplay involves switching between the two on the fly to take advantage of their special abilities. The game is controlled using the keyboard by default, but also supports PC-compatible videogame controllers. 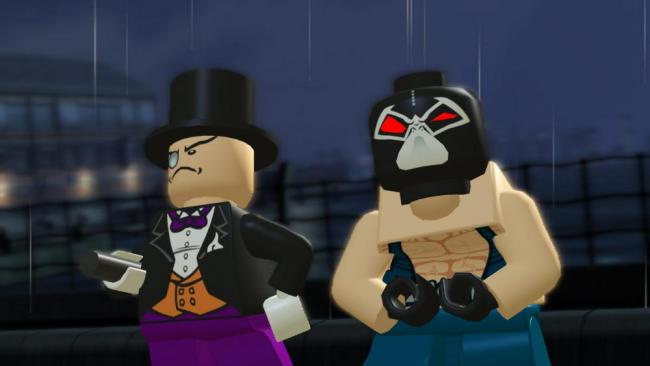 The game boasts a two-player co-operative mode where a friend can take control of the secondary side-kick character. You share the same computer, with one player using the left half of the keyboard and the other using the right. (Or, one or both of you can use controllers.)

The Batman universe introduces some fun new gameplay ideas, such as Batman and Robin’s long-range Batarang weapons; the Riddler’s mind-control ability, which allows him to take control of other characters; Joker’s shock buzzer; and the ability of “Super Strength” characters like Clayface and Mr. Freeze to haul around huge objects.

Batman and Robin can also change into different suits at strategically located swap stations to gain special powers. Some of the suits gel with Batman lore, like Batman’s winged suit for gliding longer distances, while others, like Robin’s portable vacuum backpack that lets him suck up Lego bricks, are more gimmicky.

LEGO Batman upholds the Lego series tradition of offering a crazy amount of unlockables and secrets to uncover, resulting in decent replay value and a fair amount of depth for those willing to delve into the game’s every nook and cranny.

With such a riotously fun concept as its backbone, LEGO BATMAN is a lot of fun. If you like LEGO, or Batman, this game is worth checking out. And if you love both – you’ll be in heaven.