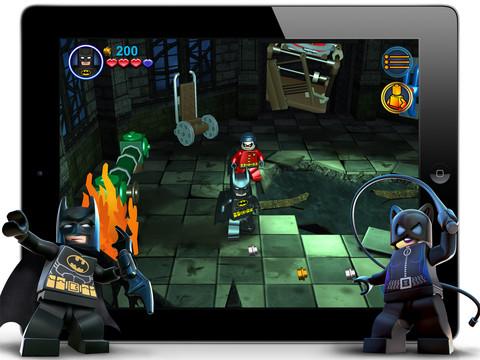 Batman made his debut in Detective Comics #27 in 1939. Ten years later, Lego began selling interlocking bricks. The two franchises are among the most successful in history, but more impressive is how they’ve managed to stay relevant through decades of changing taste. Many mobile titles attempt to emulate their genre counterparts on the consoles, but Lego Batman: DC Super Heroes is a full console game. Can the world’s greatest detective put the pieces together?

Lego Batman: DC Super Heroes is actually a port of Lego Batman 2: DC Super Heroes that released on consoles last year. The game has been translated intact, with a whopping 80 playable characters, full voicework, and cinematic cutscenes in tow. This is the twelfth game in the Lego series from Traveler’s Tales, and certainly not the only recent Batman game.

There’s a complete Batman story here that quickly drags in other familiar DC faces. The tongue-in-cheek Lego-ization of the source material we’ve come to expect is in full effect, poking fun at the well-worn tropes of the Gotham universe and constructing the characters you’ve come to love from the blocks you grew up playing with. Funny is too strong a word, though to be fair, Adam West was doing a Lego-esque take on Batman 50 years ago, so this isn’t exactly new ground. The script is certainly strong enough to keep you from skipping the cutscenes, but it would have been nice to see something original (tall order in the Batman universe), since this is the second game in the mashup.

Lego Batman looks good and sounds good, complete with the timeless Danny Elfman score that will get you hyped even coming from the iPhone’s speaker. More importantly though, it plays well, at least most of the time. As often as virtual joysticks and d-pads are the bane of the console gamer’s existence, controlling Mr. Wayne is surprisingly smooth here, due in part to the fact that the game seldom asks for precision. When it comes to things like targeting multiple enemies with your batarang, the touchscreen actually benefits the player. Variety is achieved not only through the staggering number of playable characters, but with special suits that certain heroes wear. Batman can temporarily gain super strength, while Robin can use a magnetic suit to walk up walls or on ceilings. Certain obstacles can only be navigated or destroyed with certain characters, so there’s reason to come back and further explore old areas when your team has grown. 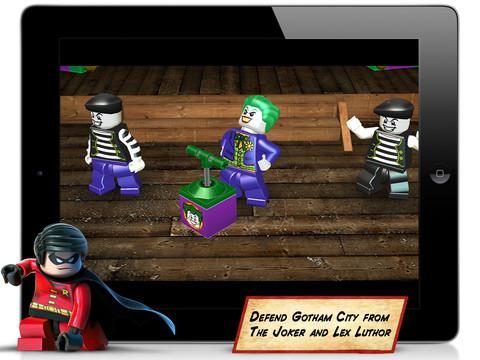 If you don’t mind a virtual joystick, getting a complete console game for use on your phone for $5 is a sweet deal. The levels certainly aren’t meant for mobile play, but it’s not the kind of game that causes you to frequently lose your place either. The click-to-kill combat is a far cry from Arkham Asylum, and so are the puzzles, but this is the rare kid’s game that adults can still enjoy. If you’ve never played a Lego game, or if you’re the kind of mobile gamer that longs for console scope, this is an extremely easy recommendation. On the other hand, if $5 for an iPhone game seems crazy to you, or if you’re looking for thirty-second levels to fly through on the subway, there are better options to choose from.