Legends: Rise of a Hero Review 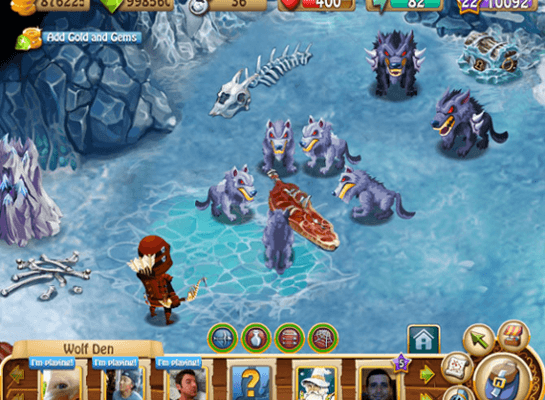 I like to say that heroes die, but legends live forever. Alright, we all know I didn’t make that up myself, but why choose one when you can go for both? Legends: Rise of a Hero is a social fantasy RPG developed by Mob Science and published by Zynga that has you attempting to pull off the double on Facebook or Zynga.com.

As the titular hero, you have your choice of three character classes as the game’s story gets underway. These are fantasy staples – Warrior, Ranger and Wizard – and it should be pretty easy to figure out how each one plays. Each class has its own unique weapons and gear and theoretically approaches combat differently, but we’ll get back to that in a minute.

Legends has both city-building and combat elements, all of which are easy enough to figure out. Objects like trees and rocks can be clicked on to produce building materials, which in turn are used to finish construction on buildings purchased with gold from the store. Every gathering and building click costs one point of Energy, just like in the many social games too numerous to mention. 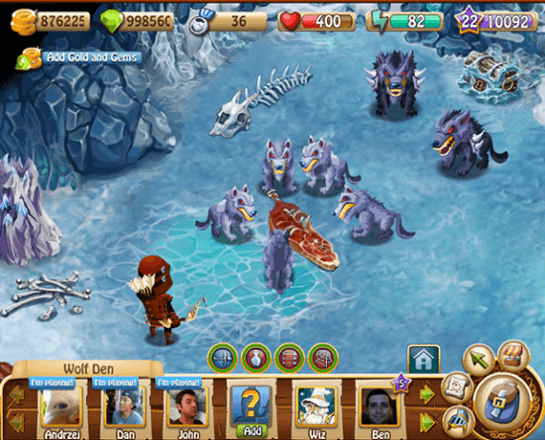 Clicking on a monster will start a fight with it in a manner appropriate to your class. Characters have an auto-attack (the Ranger fires a bow, the Warrior swings a melee weapon, etc.) and three additional special attacks that unlock as they level up. This permits some strategy when you make your initial attack, like using the Ranger’s multi-target special to hit multiple enemies.

But because the movement system is so slow, asking you to click on a spot to move and drag the map to move even further, it’s not like mobility and range do you much good most of the time. Monsters end up swarming you and forcing a fight at close range in most cases, suggesting that maybe the Warrior class is the way to go. Special attacks are on cooldown timers, so you’ll often be letting the auto-attack do most of the work.

Your hero has a separate meter for hit points, differentiating Legends from similar games where Energy also doubles as a pool of HP. That’s the good news. The bad news is that HP refills slowly over time just like Energy, effectively making it a second constraint on each play session. Healing potions are available, but initially only by asking for them from friends or buying them with Gems, the game’s premium currency. Death leaves you with three options: Resurrecting in place with half of your HP for free, teleporting back home and rezzing with full HP for free, or spending 20 Gems to pop right back up with full health. 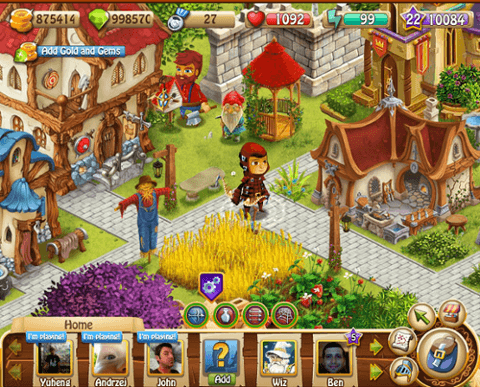 Defeated foes drop materials you may need for buildings or completing quests, along with gold and experience points. They also drop weapons and armor that grant various stat boosts and can also spiffy up your character’s appearance. Unneeded gear can be sold for gold with a single click.

A crafting system offers another way to beef up your arsenal, with separate buildings used to create each type of item. Simply gather the right materials, pick the thing you’d like to make, wait the predetermined amount of time and voila, you’ve got some new equipment. Different structures are unlocked as you level up, and buildings can also be upgraded once you’ve gained enough experience.

The Tavern deserves a special mention as you can do more than enjoy a frosty mug of ale there. Once a day, the characters used by your in-game friends can be recruited to fight by your side for a limited time, which is the perfect way to get help for some especially tough fights. For the friendless (like, say, a game reviewer testing out a brand new game), mercenaries can also be persuaded to join up for the right amount of Gems. 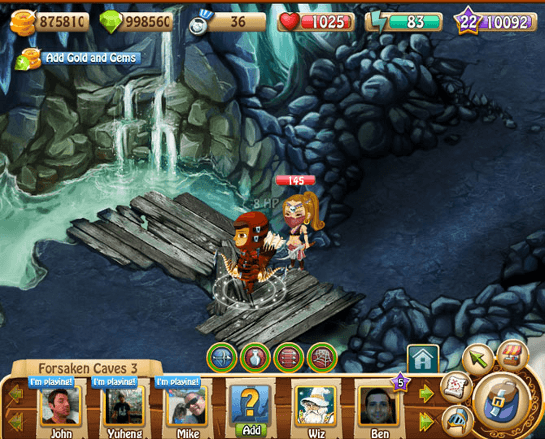 The world outside your starting zone is covered by fog until you move into each new area for the first time, leading to plenty of ambushes by lurking monsters. Enemies respawn pretty frequently, which is nice because Legends doesn’t break any new ground when it comes to quests. We’re talking killing ‘X’ numbers of monsters or gathering ‘Y’ items of a certain type and returning to the quest-giver. Some snappy banter in the dialogue is one saving grace, as is the tendency for NPCs to make dramatic entrances, like two guys who crash a boat on the shore near your castle.

There’s no question that this is a nice-looking browser-based RPG, and you’ll want to play it maximized unless you can’t bear to be away from your Pinterest boards or something. The music is also top notch for a game of this type, though it takes a break at times and lets the ambient sounds take over. Those are also good.

In fact, except for the occasionally frustrating controls, there really isn’t anything about Legends: Rise of a Hero that isn’t well put together. It’s just that if you enjoy social RPGs, you’re not going to be able to shake the feeling that you’ve played something very similar before. To stretch my initial analogy painfully thin, this game may make it to hero, but legendary status is probably too much to ask.