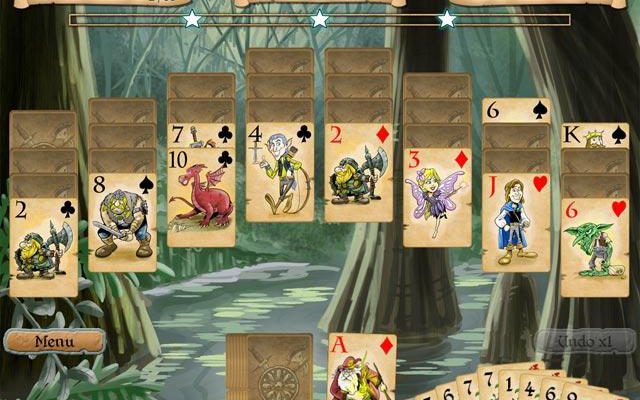 Of late, there’s been a resurgence of solitaire-based games, both in the casual and social game arenas and through it, some interesting variants of the classic card game have emerged. With Legends of Solitaire: The Lost Cards, developer The Revills Games obviously hoped to add to the growing list of cool new solitaire titles. Sadly, the company’s slap-dash adventure/solitaire game just isn’t that much fun.

The trouble starts immediately, as the game represents itself as an adventure game with a solitaire component. Not only do the game’s title and intro sequence imply this; the company’s own description of it does. “Play fun filled matches of Solitaire as you journey across the Solitaire Kingdom on the quest to find all the cards.” Call me crazy, but when I read that, I figured I’d be playing solitaire in the service of something larger: exploring the land, doing battle with evil, saving a kingdom, perhaps. I was sadly mistaken. There was no journeying, questing or finding of anything, let alone any exploring, battling or saving. What there was, were roughly a hundred monotonous hands of solitaire.

The game’s cliche-packed intro told an extremely vague story of the ill-fated Kingdom of Cards where one day, the suits turned against one another and the House of Cards vanished. Then evil came in the form of some typical green-skinned monsters and a wizard came after that, to locate the “One” who can find the lost cards and save the kingdom. Yawn.

I was told I was the “One” who was supposed to save the kingdom, so I set about playing solitaire: or a simplified version of it anyway. The rules here are a little different than classic solitaire—rather than creating rows of sequential, alternate-colored cards, here you remove cards individually by matching them to cards one higher or lower, drawn from a deck. For instance, if a row has a nine card visible, then to remove it you need to draw an eight or a ten card from the deck. 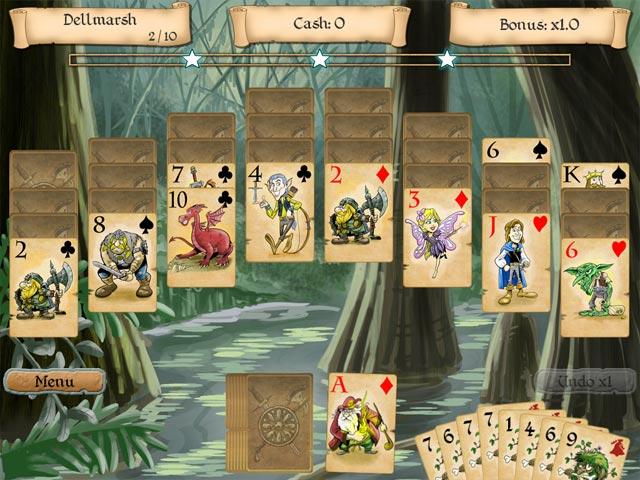 Another significant difference between classic solitaire and this version is the use of powerups. An in-game shop offers powerups such as a mace that breaks card locks or an ax that removes cards from the board and you can purchase these with cash you earn as you play. In addition to permanent/active powerups, there are passive powerups that grant bonus multipliers and single-use powerups (like potions that put out fires).

These powerups add a modicum of interest to just matching cards as do the game’s “special” cards. These show up randomly in your draw deck and can help or hurt you. You might draw a blacksmith card that gives you some coin or a star card that helps you achieve your objective. Then again, you could draw a sorcerer card that temporarily destroys one of your powerups. This element of chance added to the broad selection of powerups should make for a pretty interesting brand of solitaire. For some reason though, it doesn’t.

Every ten-hand level starts with a story blurb telling you where you are and what you’re doing. You’re also given some objectives which consists of things like, “Collect 70 stars, Earn $900 cash and Achieve 4 Perfect (clear) boards.” You play ten hands of solitaire in hopes of achieving these goals, and if you fail to complete any one of them, you must replay the ten hands until you succeed. When you do succeed, you’d expect some kind of reward, some fun animated cutscene or story tidbit to give you a sense of accomplishment, right? If so, you’re going to be disappointed. All you get upon completing your objectives is an image of a static map with a blue dot blinking on it to indicate your progress. That and a Play button that sends you on to another ten-hand level. 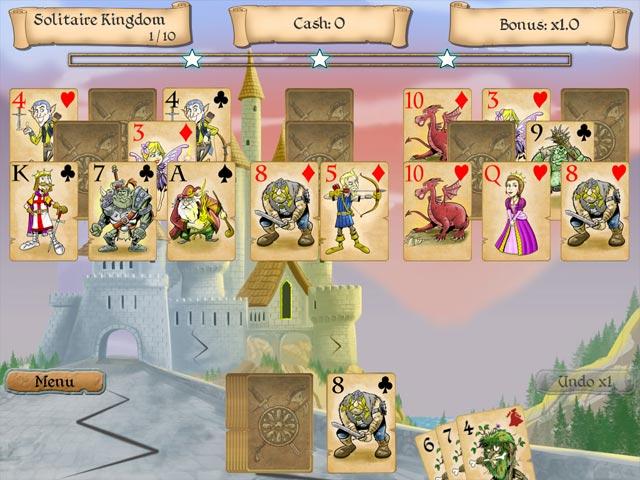 It appears that The Revills Games tried to create variation in The Lost Cards by progressively changing the card layouts and in some games, by blocking cards with fire or locks. The problem is, these formation changes and piddly obstacles don’t present much in the way of variation or challenge. They also tried to add interest by allowing you to choose your own deck and to play two other game modes: TriPeaks and Free Play. Again, problems. While it’s good you can change decks (the default deck has characters drawn on its non-face cards and is visually confusing), it doesn’t add much entertainment value, and the only thing differentiating the two extra game modes from the main game is their lack of pointless story blurbs.

What often saves a not-so-great game is its amazing graphics and effects, but I’m afraid The Lost Cards doesn’t have much going on in that regard. The hasty 2D backgrounds aren’t horrible but aren’t life-changing either, and the music ranges from the suitably orchestral to the oddly inappropriate (there’s one Muzak-ish theme that sounds as if it’s played by the piano guy at Nordstrom). Adding insult to injury, nothing ever comes of the so-called “story”. Once you’ve played through what feels like a thousand hands of solitaire, the game ends with nothing but a careless nod to its narrative. Not that surprising all things considered, but still a disappointment.

Overall, Legends of Solitaire: The Lost Cards just isn’t very much fun. With all the cool modern solitaire variants available today—especially of the free-to-play kind—developers who want our money need to offer us fun, unique experiences. The Lost Cards fails utterly do that, and instead offers us a game that’s monotonous and unrewarding.