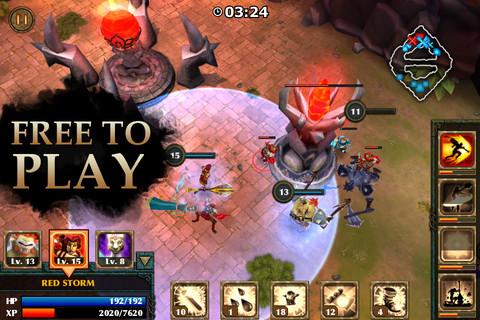 Legendary Heroes shows a lot of promise, but “legendary” it ain’t

I’m still not sure what happened with Legendary Heroes. It was inspired by the Defense of the Ancients mod for Warcraft III, features a number of the same mechanics as League of Legends, and … isn’t nearly as fun as either title. That’s a shame, because the game’s got a lot going for it, but developer Maya Games still has a lot to do if it really wants to make the title great.

The gameplay here is pretty straightforward and is especially easy to understand if you’ve ever played League of Legends. You play through a campaign filled with thirty short levels (though absolutely no story to enjoy) where your goal is to destroy your enemy’s defensive towers and Source well. To help you with your quest, you have three heroes and an endless supply of AI minions who regularly spawn and advance across the map. Your opponent, in turn, is trying to do the exact same thing with their heroes and minions.

The game contains a total of eight different heroes to choose from, though some of them have to be unlocked with in-game gems. Each hero has four different special abilities at their disposal, which are unlocked and improved as your characters level up.

Aside from the well-implemented controls, the game has some great-looking graphics. Visually, this is strikingly similar to Warcraft III and League of Legends. However the production values aren’t all amazing, as there’s no soundtrack during gameplay and the sound effects don’t really have much of a “wow” factor going for them.

However the biggest issue with Legendary Heroes is just how buggy and unpolished it feels. This is especially problematic when it comes to AI pathfinding. This is hard to notice in the early levels, which are mapped out in straight lines. However, when the maps start taking on more complex layouts, it becomes glaringly obvious.

When you hold down on your character’s portrait, the hero will start set out on an automatic return to your altar in order to heal. It’s not uncommon to see said character make a straight beeline for the altar, without actually navigating the level’s shape. This means the character will run into the map’s borders and get stuck, making him/her sitting ducks and will most likely get them killed by pursuing enemies.

Additionally, it’s not uncommon to see characters running through solid environmental objects, including defensive towers and the landscape that is placed along a level’s borders. However, it’s impossible to run through other characters, even friendly ones, which means it’s practically impossible to beat a hasty retreat if your health is low and you’re stuck in the middle of a group brawl. 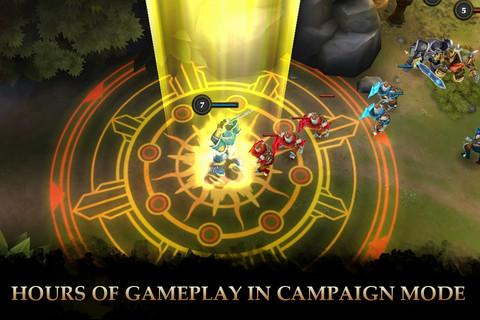 The game’s general performance isn’t all that polished, either. At the time of this review, the game would crash at least every thirty minutes. Meanwhile, the store for gold and gems was never able to connect to process an order. Also, it was incredibly surprising to learn that there’s no multiplayer mode for the game, since this seems like exactly the type of title that needs such a mode.

The final issue is the freemium nature of the game. For the first few levels, there’s not really much of a reason to purchase in-game gems or gold. In fact, if you’re patient, you can accumulate quite a bit of gold by repeatedly playing through levels, but the gems are what are needed to purchase/unlock the really useful items and final characters. You can earn gems by completing all the goals in a campaign level, but these are small amounts and you can only earn them once per level. Now, there are options to get gems for free, but these are courtesy of an offer wall that only provides generous rewards if you sign up for other groups’ services or products.

At its core, Legendary Heroes seems like it could be something truly great. Unfortunately, it’s held back by the lack of polish, general bugginess, a missing multiplayer mode, and the fact that it falls into the freemium trap of having content that’s essentially off limits unless you’re willing to spend cash. Hopefully Maya is able and willing to address these problems, but it’s hard to recommend the game as it currently stands.