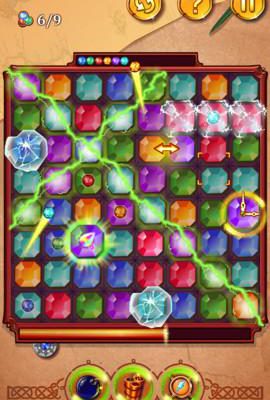 Legend of Talisman doesn’t rewrite the match-3 legend, but it pens a new chapter that’s compelling all the same.

Yarr, sea dogs! Deep in the watery grave of Legend of Talisman, there be gems as big as a babe’s fist, and gold as pure as a blushing milkmaid. Thar be puzzles as mysterious as a crumbling treasure map, and deep as…uh…Davy Jones’ locker. Um, Flying Dutchman…er, *cough.* Okay. Legend of Talisman is quite a decent match-3 puzzle game that may seem a bit too familiar at first, but actually stands up well on its own.

There’s no story behind Legend of Talisman (aside from maybe “You Are a Pirate”), but your goal is to collect treasure, because Treasure is Good. But treasure rarely makes itself easily found, and that holds true for Legend of Talisman, too.

Each level in the game has two halves of a gold talisman that must be united before the level can be cleared. It’s not as easy as it sounds, since several objects are in the way, including concrete blocks and, most notably, colored gems. Luckily, the gems disappear if you can match two or more of the same color (which makes Legend of Talisman more of a match-2 game than a match-3, but we digress) -but you don’t necessarily want to make every single one go “poof” instantly. You might need those gems to build bridges or staircases that can unite the two talisman pieces.

Given time, you’ll also have to navigate your way around traps, utilize power-ups cleverly, and ways to make obstacles like sliding concrete blocks help you in your quest to bring the talisman together. Legend of Talisman isn’t necessarily a laid-back match-3 puzzler that lets your mind drift while you lose yourself in a sea of colored jewels. Practically every move needs to be pre-meditated.

It’s especially important to think clearly when you play Legend of Talisman because true success only comes when you unite the talisman and clear all the gems on a stage. If you put the talisman back together but neglect to clear away the gems, you’ll get a pat on the back, a silver medal, and permission to progress to the next stage. However, gold medals are necessary to  unlock new worlds, so it pays to do things right the first time if you want to avoid backtracking. 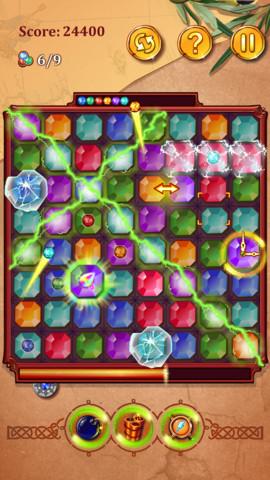 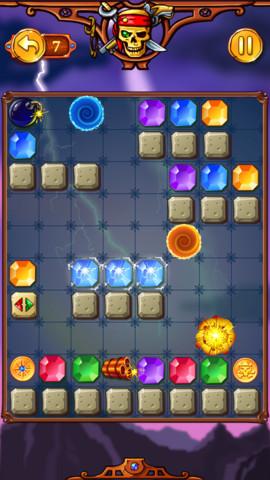 Farming gold medals makes Legend of Talisman a tad frustrating. Accessing a new world requires a lot of gold, so you can count on re-visiting the same levels over and over again until you get the right solution.

Progression is made even stickier by the game’s panhandling for in-app purchases. Legend of Talisman is free to play, so unsurprisingly, you can buy your way to victory if you so desire. You can also buy puzzle solutions if you’ve just had enough of a certain level. But what’s really kind of cruddy is the fact that you have to buy undos. Most puzzle games that are driven by careful moves are typically kind about letting you use all the undos that you need. Starting an entire puzzle over because of a single bad move is tedious work.

Legend of Talisman isn’t legendary, but it’s as solid as a piece o’ eight. If you’re into match-3 games that aren’t afraid to try something new, it’s definitely worth a download. Matey.