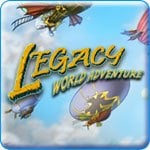 Legacy: World Adventure has players stepping into the shoes of fiery redhead Emily King, the daughter of a storied adventurer who is intent on winning a legendary race around the world and continuing her family’s legacy in the competition. Along the way we encounter more than half a dozen different kinds of puzzles each of which provides a valuable clue about our next destination. It’s kind of like Amazing Race: The Video Game, but with bug eating and rock climbing challenges swapped out for jigsaw and match-three puzzles.

This generous description would certainly make me want to give Big Blue Bubble’s eclectic new game a shot. Alas, it’s much better in concept than in execution—though it didn’t have to be that way.

The game kicks off with a compelling little prologue that introduces players to an interesting mix of characters, including protagonist Emily, her hillbilly mechanics Zeke and Jethro, a monocle-wearing arch-nemesis named Sir Oxley D. Barrington III, and even a love interest in the form of the bespectacled and somewhat geeky Timothy Richmond, a fellow racer.

We’re then launched into a lengthy tutorial that takes us through Legacy: World Adventure‘s primary puzzles and shows us the sort of clues we can expect to obtain by solving them. Completing a Bejeweled-style gem swapping game, for example, provides us with a text hint that describes something exclusive to the country we need to find.

If you can’t guess the destination after the first clue, a Hexic / Bejeweled Twist-like puzzle eliminates several countries from the global map (the more matches you make in a set number of moves, the more nations disappear), while a third puzzle type has players drawing lines between matching stones to create triangles that reveal slices of a photograph of a famous landmark. These line puzzles are also used to reveal country flags—the fourth and final clue for each destination.

When we arrive at a destination we’re provided a few interesting facts about the country’s geography, population, culture, and politics—a nice little bonus—before a clue to the race’s next country is unveiled.
The basic design is solid. Solve a puzzle, get a clue, decide whether you know the country to which the clue refers and either fly to it on the world map or move on to the next clue to collect more information before making your guess.

But things begin to go wrong almost immediately. For starters, most of the text clues we’re provided are better described as giveaways, seeing as how they all but scream out country names (one tells us that the country we’re looking for is home to the Parthenon; another says you’ll find the Buckingham Palace here). Indeed, it feels as though these clues are targeted at fifth grade social studies students rather than adult players.

And since each new leg of our journey begins with one of these text clues offered up for free, much of the time there’s no need to even play games to obtain additional clues. I’m not exaggerating (or bragging) by writing that I flew through several of the game’s ten brief chapters without ever playing a single clue puzzle.

Not that I was missing much. These puzzles aren’t exercises in strategy or skill so much as tests of patience. There’s no way to lose any of them; players just keep on shifting jewels or drawing lines until a clue is revealed. It doesn’t even matter how quick or slow you happen to be; you just need to keep slugging away. I was happy to skip these tedious challenges whenever I could.

It’s worth noting, though, that there are a few puzzle types that you can’t avoid. Each of the game’s chapters concludes with a scroll that reveals the first text clue for the next leg of the race. The only way to collect this scroll is to take on one of several rudimentary visual conundrums. There are a couple of jigsaw puzzles, some tile and stamp matching games, and a couple of spot-the-differences-between-these-two-pictures puzzles. None are remotely innovative, and none take longer than a minute or two to finish.

But even more maddening than the simplistic puzzles is the shocking amount of repetition that takes place during the two or three hours it takes to play through the game. The creators opted to make only 30 of our world’s 200-odd countries viable destinations, greying out the rest on the game’s map of the globe (there are, for example, only three visitable nations in all of Africa). I ended up arriving in the same countries time and again. Worse, some of the clues leading me to these countries the second or third time were identical to the ones I was originally provided. Needless to say, replay value sits around nil.

It’s frustrating to see such a nifty concept get flushed away. Had Legacy: World Adventure been given more time to bake, allowing the developers to tweak the puzzles, create more challenging clues, and triple or quadruple the number of countries we can visit, it could have felt both fun and innovative. As is, it will likely prove to be a dull and repetitive drag for adults, and better suited to younger players or people who are looking for something not to taxing on the brain.