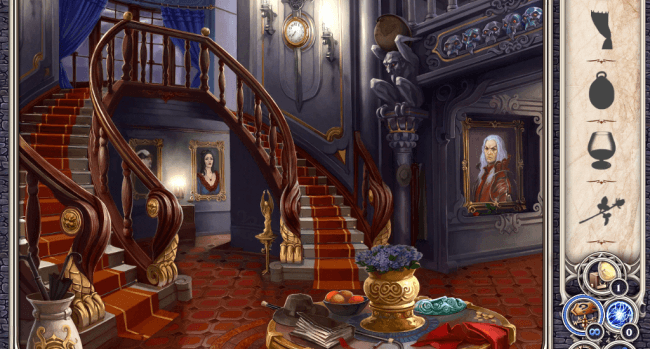 In Legacy of Transylvania, players will embark on a harrowing tale of vampires and hidden objects, as they work their way towards becoming the king or queen of an old Gothic castle. They’ll be guided through their adventure by a stubby gargoyle named Dante, as players acquaint themselves with a colorful cast of quirky characters and mysterious environments. The result is a highly stylized hidden object and social experiment, with a sense of depth and intrigue that is matched by few others, and an ease of accessibility that would even allow Dracula himself to pick it up and play.

The game starts out with your fairly typical hidden object and social hybrid tropes, like replaying the same scenes over and over again in order to level up and add new items to your inventory for questing purposing; the use of an energy system (called “Light points” in this game); and the endless pages of “Collections” to complete, a concept I still just can’t seem to grasp for whatever reason, no matter how many times I’ve seen it in action before. However, once the quests start rolling in (and trust me, you’ll quickly have upwards of 10 to tackle in your Questlog at any one time), and the hidden object mastery requirements start stacking up, you’re going to need to sacrifice plenty of precious real-world sunlight just to stay on top of it all. 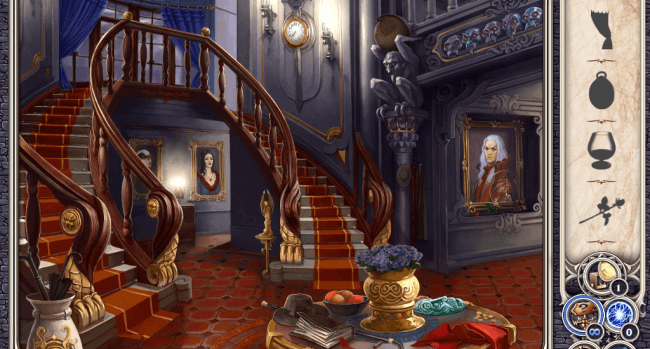 You’ll also begin unlocking larger “Chronicles” the further you progress in the game, which encompass a string of 6 or 7 related main quests that serve a larger purpose like expanding the overall story, or introducing a bigger concept that might take a few different steps in order to fully comprehend. For instance, one of the earliest Chronicles is focused on the biggest social component in Legacy of Transylvania: visiting your friends’ castles and biting them to get them to help you in your own hidden object endeavors. That’s some pretty cool and admittedly freaky stuff right there! You will run out of Light points, or energy, along the way though at regular intervals in the game, but there are still a lot of non-monetary things you can do to make your recharging rates more efficient, or to score helpful boosts every time you level-up or reach a special quest milestone.

Everything in the game is presented with a visual sharpness that you just don’t see in many social HOGs these days: from the blueprint-esque map of the castle and castle grounds that gets gradually colored in with the more rooms you unlock; to the descript character customization screens and light-source storefronts; to the quest explanation alerts and subsequent reward screens. There are so many things to pay attention to on the screen at any one time, and yet the interface never feels cluttered no matter how deep the game gets: thanks in large part to the small and compact positioning of icons. However, while the menus do look great, sometimes it’s a little tough to click on the tiny hotkeys with pinpoint accuracy, and there was more than one occasion where I accidentally clicked on a hidden object scene on the map when trying to tap on my rewards they spray out after finishing a quest. 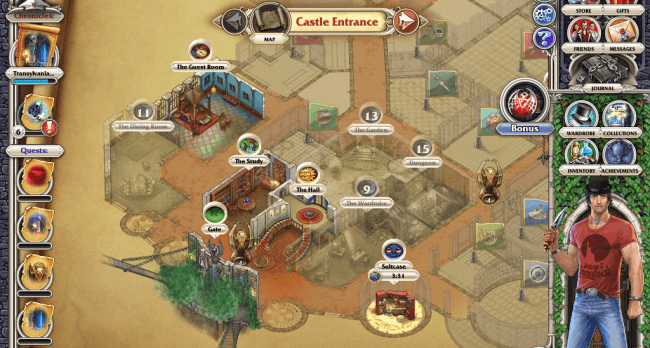 The hidden object scenes themselves are as varied as they are fun, with tons of different modes that switch up the way you’ll scan through each room, so that things never get dull. For instance, the game starts you out with your typical list-based hidden object scenes and Silhouette Mode hidden object scenes. But then you’ll start encountering Shadow Mode, which jumbles all the letters on your list of hidden objects to find; Twin Mode, which has you hunting for duplicates of a singular object; and my personal favorite, Comparison Mode, which puts two identical scenes next to one another and tasks you with finding the subtle differences between them.

My only real complaint about the hidden object scenes is that their completion parameters are often far too easy. There are no penalties for making incorrect guesses, no combo bonuses that I could see for making several matches in quick succession, and even one unlimited form of hints to get you moving in the right direction. Even the early Timed Mode stages give you an overly generous and unnecessary 4-minute search time, which most players won’t even need to use a quarter of to find everything on their list. But even so, these design choices still work together in order to make for one relaxing and gradual experience, and so if that’s what Game Insight was really going for in this game, then they’ve managed to achieve it wondrously.

One of my favorite parts about the game is Legacy of Transylvania‘s vast array of customization components, which not only let you change the physical appearance of your character over time, but also let you deck them out in cool clothing and accessory items like bowler derby hats and shimmering bracelets. But each article of clothing you can buy and wear has a much greater purpose, as each one brings its own unique attributes when equipped, like increasing your overall Light point capacity by 10, or increasing your chances of finding rare items when searching through a room. 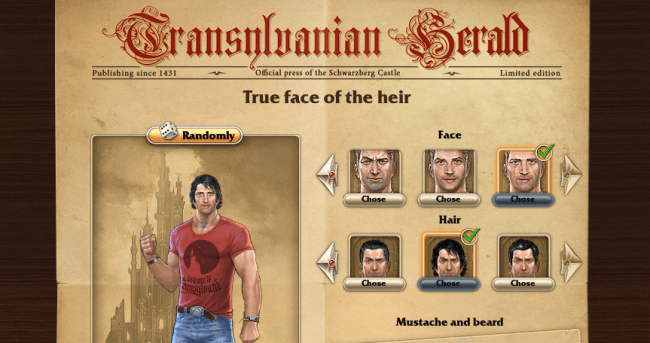 No wait, I take that back – I think my real favorite part in the game is when players reach Level 8, and gain the ability to do battle with monsters that start appearing in the castle. Slaying your foes is as simple as tapping on them repeatedly until their health counter goes down (you’ll lose a few spare Light points in the process as the enemy fights back), and it’s always an unexpected surprise and a healthy distraction from the primary gameplay when you get to go toe-to-toe with an ugly bat who’s decided to nest in your castle. The real strategy comes in buying new weapons and defensive measures that will help you take down even the most challenging creatures without batting an eye.

There’s just so much to do in Legacy of Transylvania that you’ll never find yourself without a room in need of searching, or a friend in need of biting. Everything that pops up in this spooky world of dark castles and disgruntled vampires is a joy to behold and to play through. Just be wary the next time one of your friends takes a trip to your castle for a late night snack – because there’s a very good chance that your own flesh and blood will be the first thing on the menu!