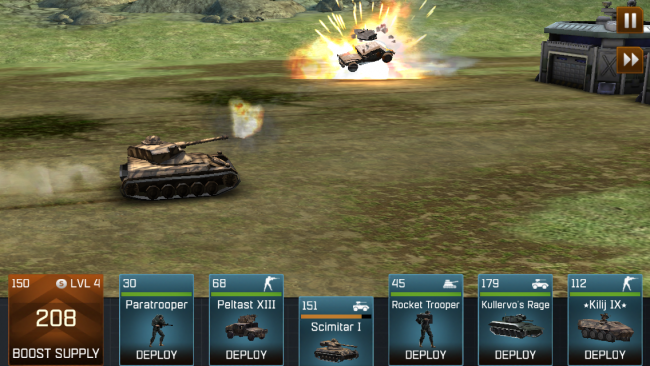 I’ve never really been into “castle defense” games, regardless of whether or not they involve actual castles. I don’t have anything against them; they just don’t do it for me. I do, however, enjoy card collecting. That’s probably why I’ve been enjoying League of War so much. Well, that and the rather impressive production values. Those don’t hurt, either.

League of War may not involve castles, but it does involve defending your base by churning out lots and lots of soldiers and vehicles. Soldiers and vehicles that, incidentally, will try to rush across the field and blow up your opponent’s base. Your Supply Lines pull in resources that you can use to summon units for fighting, and can be boosted several times over the course of a match to make them even more productive. The trade-off being that the resources you spend boosting your supply lines could’ve been used to crop a tank or something.

What I find really cool about all of this is the incorporation of card collection. Each soldier and vehicle is represented by a card that you can earn through completing campaign missions, as a reward for PvP, or by opening chests (i.e. card packs). Duplicates can be combined to “promote” the card and boost its potential – higher maximum levels, attack power, etc. You can also use any unwanted cards to level-up those you want to keep, creating a pretty nasty fighting force in the process.

It’s weird how well these CCG elements compliment the castle defense-style combat but they really do. Finding a rare card and boosting it, then watching it decimate your enemies, is always satisfying. Of course there’s a “weapon wheel” of sorts, so no matter how powerful your level 20 tank might be, it’s still vulnerable to Rocket Troopers and helicopters.

I was also impressed by League of War‘s overall presentation. It may not use the Unreal Engine but it’s still a pretty good-looking game, with plenty of variety to the different units you can put into your army. The pacing of the free-to-play elements is enjoyable, too. There’s definitely still downtime while you wait for your various energies to recharge for more campaign missions or PvP, but when you’re topped off you should be able to get a decent amount done and it doesn’t take all that long for everything to recharge. 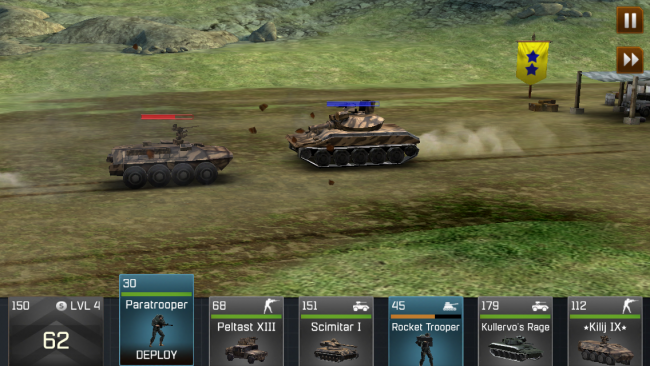 The issues I’ve had with League of War are few and relatively minor. I think the menus could be structured a little better as it can be something of a pain to constantly have to back out of the Army menu to go into the Warchest, or try to access the Campaign or Versus modes from anywhere other than the main screen. I also wish the information on the cards made a little more sense. There are values for Attack, Defense, and overall value, but the more detailed stats like Damage, Health, Armor, and so on seem to contradict them; at the very least they don’t seem to fit together too well. Ultimately you just want higher numbers for things like Attack and such.

Lastly, there’s the PvP. I actually enjoy it here, and it’s a great way to earn some extra goodies, but it can be tough to figure out how you’ll stack up against another player until you’re in the middle of a battle – and by then it’s too late to do anything about it. The Rank and Reward values can give you a vague idea at times, but I’ve ended up getting totally stomped seemingly out of nowhere a bit too often for my liking.

League of War is one of those games that totally caught me by surprise. Here I was expecting just another freemium war game, but now I find myself having to fight the urge to keep plowing through campaign missions and PvP fights so that I can actually write this review. I know not everyone will be as enamored with it as I am, but with a cool blending of cards and castle defense, I think it’s definitely worth giving it a shot.

Make It Rain: The Love of Money Review